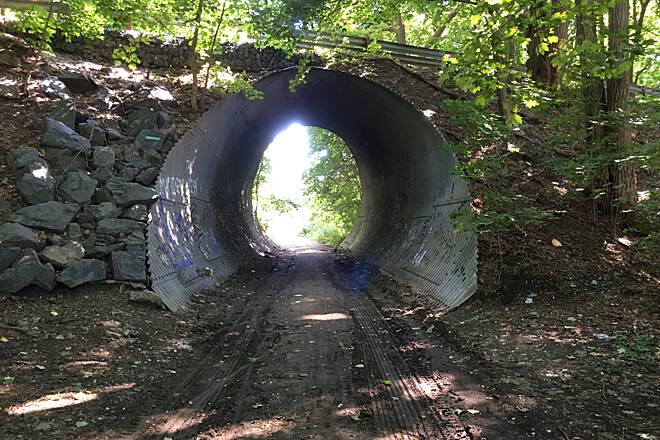 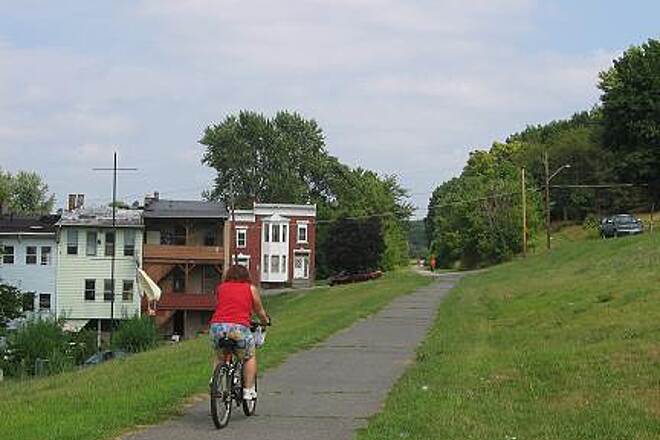 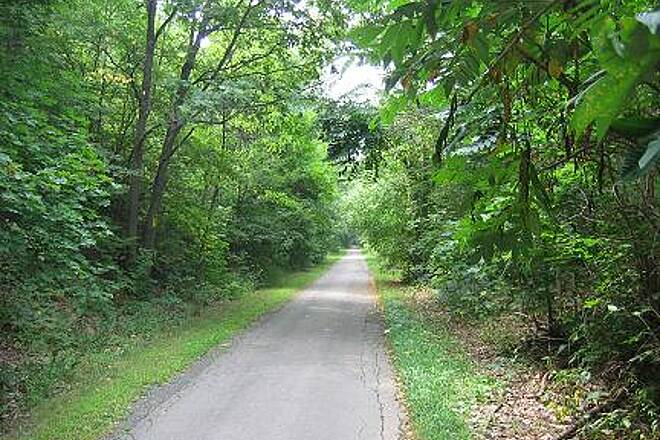 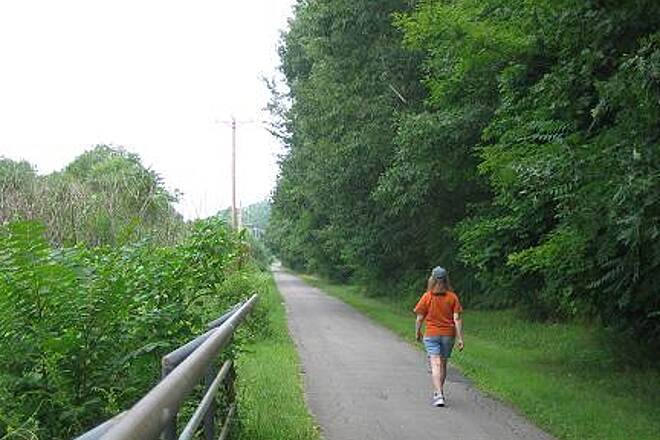 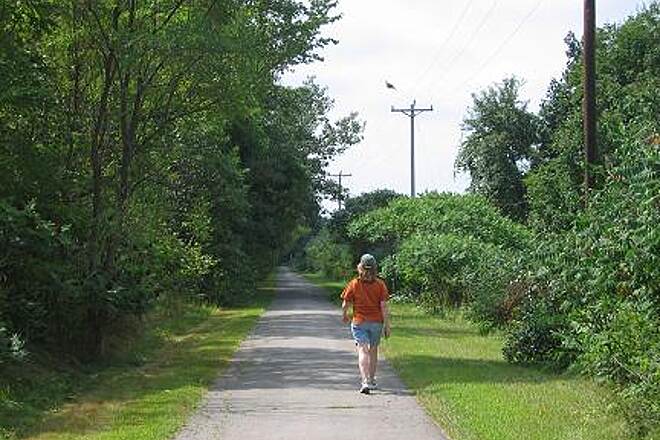 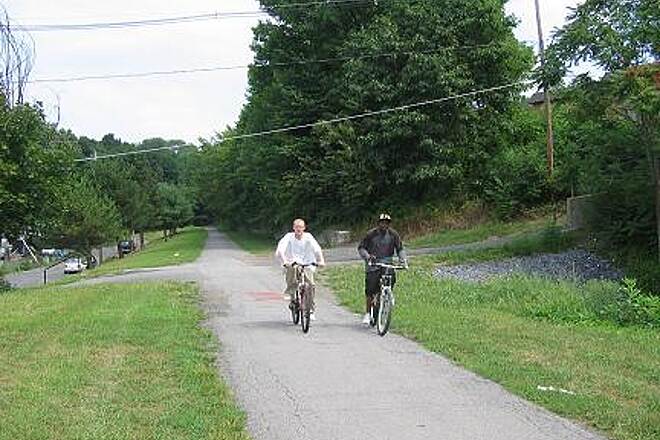 Inland and east of the Hudson River, the Uncle Sam Bike Trail (also called the Uncle Sam Trail or Uncle Sam Bikeway) largely serves as a trail for residents of Troy. If, however, you are traveling in the area and want to stretch your legs, this trail offers a scenic retreat. It is also part of the extensive network of trails and on-road bike routes in the area. In particular, on the west side of the Hudson River, you can pick up the Erie Canalway Trail, which stretches across northern New York from Albany to Buffalo.

For convenient parking and less urban congestion, begin at the north end on Route 142. From here the trail is quickly enclosed in a canopy formed by a variety of trees, including oak, aspen, maple and cottonwood. Through the trees on your right you have a bird's-eye view of a suburban neighborhood. On your left rises a wooded hillside that forms a forest backdrop for virtually the length of the path, except where the trail crosses roads. Enjoy this verdant interlude but don't forget to watch the trail—it is considerably eroded in some places, and farther south the pavement is occasionally uneven.

About halfway, your glimpses of Troy become more urban. At mile 1.7 you pass the buildings and athletic field of the large Lansingburgh High School. A granite obelisk near the trail marks Knickerbocker Park's memorial playgrounds, a good spot for taking a break to enjoy the sweeping view of the valley beyond.

The Uncle Sam Bikeway follows the corridor of the Boston & Maine Railroad. The B&M brought passenger traffic and a lesser amount of freight traffic to Troy, where travelers could connect with the New York Central and the Delaware & Hudson Railway. Troy was also home to Samuel Wilson, who supplied upstate New York troops with meat during the War of 1812. The story goes that provisions came in barrels stamped "U.S." and soldiers joked that it stood for "Uncle Sam." The name came to stand for the patriotic caricature of America.

At the trail's southern end, you'll emerge from the woods into the city. There is no parking access here, and bicyclists take note: Keep your eyes open for broken glass on the trail's last block.

The northern trailhead is in north Troy on State Route 142 (Northern Drive), one block east of 9th Avenue. Look for the trail and parking area on the south side of the highway.

The trail condition is generally not great; although the asphalt paving is in okay condition, vegetation and debris often accumulate as it is only sporadically maintained. It does create a very forested feeling to the trail despite being in a city, and in the southern half of the trail, to the east a steep slope rises up to Oakwood Cemetery. Going northward, the trail passes under 101st Street as it enters Lansingburgh, and you start to feel that you have left the city behind.

Coming from downtown Troy, we usually would get off the trail where it crosses Gurley Avenue, heading to the west where it becomes 114th Street, and stop for ice cream at the Snowman on 5th Avenue. The upward slope of the trail as you go north is barely perceptible, but you can see it clearly when you leave the trail, as there is a steep descent to 114th Street. After ice cream we didn't always have the motivation to ride back up the hill to the trail, and would often just ride back to downtown on the quieter streets like 6th or 7th Avenues.

"The Uncle Sam Bikeway’s southernmost trailhead is located on Ingalls Avenue, near 8th Street, in a very urban residential area of Troy. On-street parking is plentiful in this neighborhood, although the designated trail parking lot at 114th Street near Gurley Avenue is more conveniently located.

The bikeway heads north from Ingalls Avenue, in close proximity to several nearby homes and business. At approximately 103rd Street, the route cuts through Knickerbocker Park and the southwestern boundary of Oakwood Cemetery.

From 103rd Street through to its terminus at Northern Drive (Route 142), the trail’s right-of-way traverses heavily wooded open space bordering the two cemeteries and undeveloped land owned by the City of Troy. There is an occasional glimpse of the Troy skyline, but most of the route shrouded in foliage.

The trail surface is suitable for bicycle and foot traffic. In line skating may be difficult on some of the more worn sections. There are at least two major street crossings to contend with and a slight change in elevation from end to end.

If you live, work, or attend school in Troy, be sure to check this route out. A bike would be the preferred method of transport due to the trail’s urban setting."