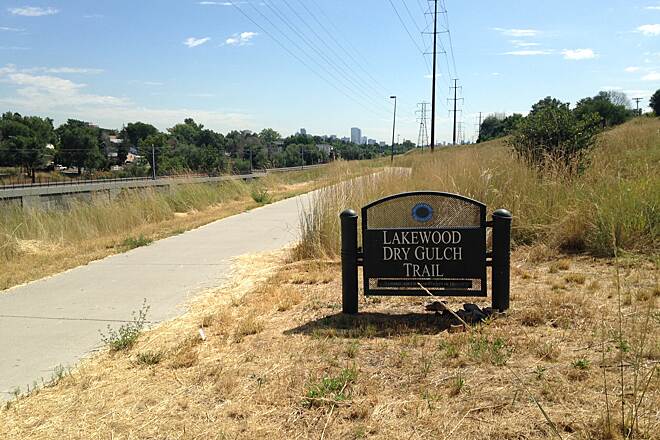 Colorado's West Rail Line Bike Path parallels the W Line, a new light rail corridor through Denver and Lakewood that was known during construction as the West Rail Line. The Regional Transportation District (RTD), the public transit agency for the 8-county Denver area, opened the separated pathway—a rail-with-trail project—along with the new rail corridor in 2013.

In the east, the path begins at the Platte River Trail in Denver, just south of US 40/287 and Sports Authority Field at Mile High, home of the NFL's Denver Broncos. Extending west from the Platte River, the trail passes the Decatur-Federal Station and runs through Sanchez Park, which features a popular disc golf course. The Knox, Perry and Sheridan Stations are next along the route in rapid succession. Access to the neighborhoods of Sun Valley and Villa Park is easy via several new pedestrian bridges over the rail line.

Trail users then enter Lakewood, passing the Lamar, Lakewood-Wadsworth and Garrison Stations. A ramp at Kipling Street leads to the Oak Station a few blocks away, just east of the trail's western terminus at Quail Street. From here, the W Line continues southwest into Golden; cyclists and pedestrians can roughly follow the corridor using bike lanes and local roads.

Due to the limitations of space in an urbanized environment, the trail uses on-road routes at times. While these sections are signed, cyclists and pedestrians need to be aware of automobiles. Refer to the TrailLink map for the exact locations of these on-road sections.

Parking for the West Rail Line Bike Path is available at the Decatur-Federal, Sheridan, Lakewood-Wadsworth and Oak Station Park-n-Ride lots. Additional parking can be found on neighborhood streets along the trail's route.

i did not see a sign at sheridan showing to cross the tracks. first time on the trail. good trail, best way for me to get from green mountain to downtown Denver.