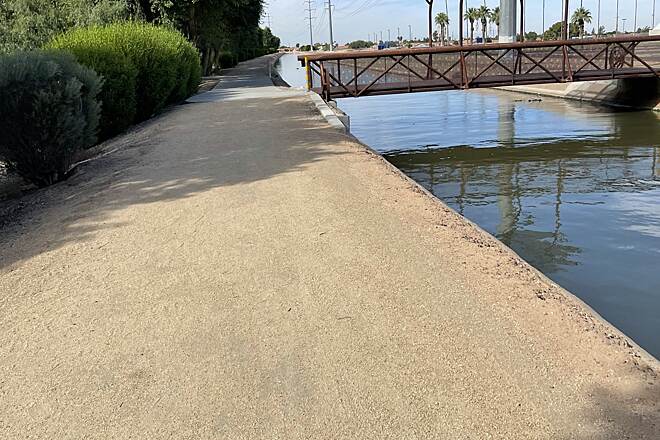 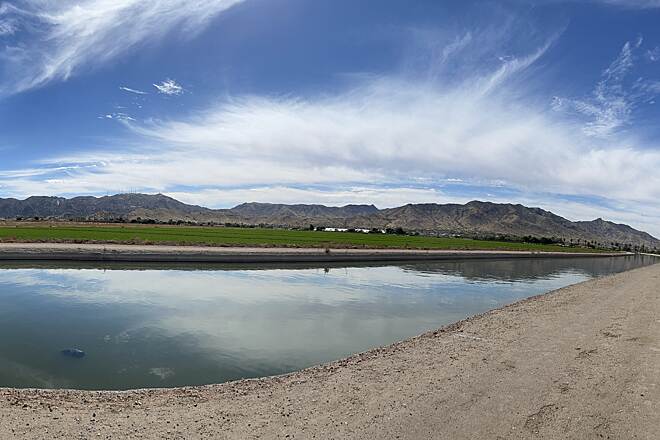 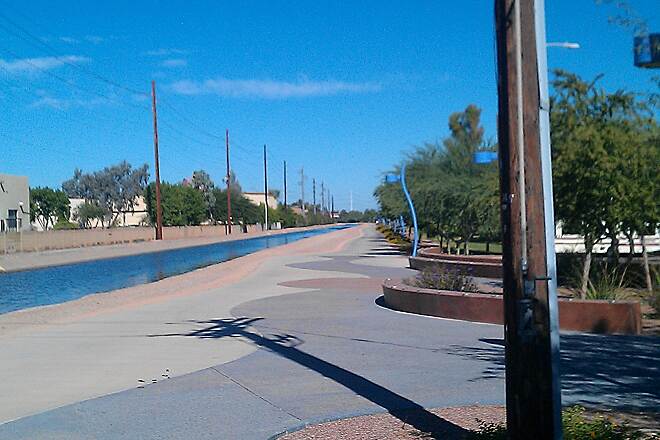 The Western Canal Path, sometimes known as the Western Powerline Trail, is one of several trails adjacent to canals in the Phoenix metropolitan area, connecting the cities of Phoenix, Tempe, Chandler, Mesa and Gilbert on its more than 20 mile, east–west route. The useful trail provides both an active transportation and recreation resource to nearby residents.

The trail has a smooth concrete surface through Tempe and where it follows the Chandler/Mesa border. For most of its route, the concrete trail is paralleled by a gravel-surfaced trail more popular with dog walkers, joggers and hikers on the opposite side of the canal. In Gilbert, the surface varies between crushed stone and concrete, while the surface on the western end in Phoenix consists completely of unimproved gravel.

Parking is available at several parks along the Western Canal Path's route:

In Tempe, you can find parking at scenic Kiwanis Park (near the intersection of Mill Avenue and All America Way), which also offers athletic fields, picnic areas, restrooms, a recreation center and a lake at its center.

This is a long trail. Start early to beat the heat because the Heat almost got us and that was returning 9:39 am It’s all paved but most of it is open hardly any trees to block the Sun.. So your exposed.. But being paved gentle on the bike and us.

Really should be TWO separate trails

EAST of I-10, this is a nice, mostly-paved trail, and you will enjoy the company of may cyclists and joggers. I especially enjoyed the Riparian Preserve at Water Ranch. It's a great little detour off the path, with its own network of rideable dirt paths, families, and lots of birds. This section of the path also goes right through the commercial heart of Gilbert, with many nice restaurants. It also connects to the very nice Consolidated Canal paved path, running north-south. This is a nice path for any kind of bicycle, as well as for walking and running. Every road crossing of any size has a dedicated crosswalk and signal.

WEST of I-10 is the rough dirt/gravel path along the canal. It's a somewhat depressed area of Phoenix. It doesn't connect to other paths, and there are few amenities. Not a good path for a road bike of any kind. Most crossings have no markings or signals. On a recent nice-weather day, I saw no other bikers (but plenty of wanderers that I gave a wide berth).

For the WESTERN stretch, there is a partially-paved alternative east-west path about a mile to the south (south of Baseline Road). The asphalt (in early 2021) is not in a good state of repair, but you will have the company of a few cyclists and joggers.

IN BETWEEN the EAST and WEST is the freeway crossing at Baseline Road. This is a very busy intersection at all times, with lots of turning traffic. Dangerous.

I'd stick with the EASTERN stretch of the "Western" Canal Path.

Same as a previous comment, my daughter and I got to AZ Mills heading west and it just ends at the parking lot. A map would be awesome so we could hook up to the other side. Also the crossings over Guadelupe and Baseline in particular are a bit hair raising.

As a Roadbiker, This has the potential to be a great ride however the break in the paved trail at I-10 & US60 will shutdown anyone traveling on a Roadbike.. There are no signs or any indication you can pickup the paved trail somewhere on the other side of the Freeway. It doesn't make any sense why they wouldn't just pave the 1/4mile dirt section? Of course it may be longer than that but its a guess from the trail maps I have seen.
Same with the Gap on the East end of the Trail in Gilbert. At least put a sign up to show you can ride down the street a hundred yards or two to catch the continuing trail to the East.

This is my first review for Trail link. I rate the Western Canal trail as exceptional for technical quality, but below average for visual interest or creature comforts, such as potable water or restrooms. I also have to ‘ding’ it one star for the abrupt drop-off from the roadway to rocks or dirt, and then a sharp decline into the canal. If a rider drifts off the roadway, they may have a wreck. The trail is extremely well lit by solar powered lights. A rider does not need headlights after dark to clearly see the roadway and any potential obstacles or debris on the roadway. The trail follows the SRP Western Canal, with one side graveled and usually used by joggers, hikers or dog walkers. The paved side is dominated by cyclists. The graveled portion goes quite some distance east, but the paved portion begins at McQueen road, and runs along the canal to Baseline road, where it follows Baseline for a distance before trailing back to the canal. From McQueen, the trail has a very slight, almost imperceptible descent to Alma School road, where it stays virtually flat until Hwy 101, then drops off maybe twenty feet to the west of Hwy 101. For the most part, it can be considered ‘flat’ riding. There are traffic signal controls at all major roads. The placement of the call button for the signal is inconsistent and not always convenient. Not a major issue, but worth noting. There is a rest area just east of McClintock, but no water or restrooms. The area is pleasant and allows for a break out of the traffic flow during peak use periods. There is a similar but larger rest area just South of Baseline at the Kiwanis Community Park. This rest area connects to the park which has some creature comforts such as drinking water and restrooms. The most interesting part of the trail is where it combines with the Ken McDonald Golf course south of Guadalupe road. Cyclists have to mingle with a golf carts at a few intersections, but there is golf ball netting over the trail for quite some distance, keeping you safe from an errant slice or hook. This is a visually interesting segment. I have not ridden the section of trail from Baseline to I-10. The trail is not as isolated from traffic along that section, and runs along Baseline farther than I like. There is one intersection with an unnamed (and unmarked) trail at the Ken McDonald golf course. That trail runs southwest for a few miles until Kyrene at Warren. It also has golf ball netting for the sections where it runs beside the golf course. All in all, a nice section of trail that is good for lower level physical conditioning, with limited visual interest. The isolation from auto traffic makes this a great ride. I’d rate this five stars, but the abrupt drop-off to rocks and dirt take away one star, and the lack of potable water or rest rooms takes off another star.