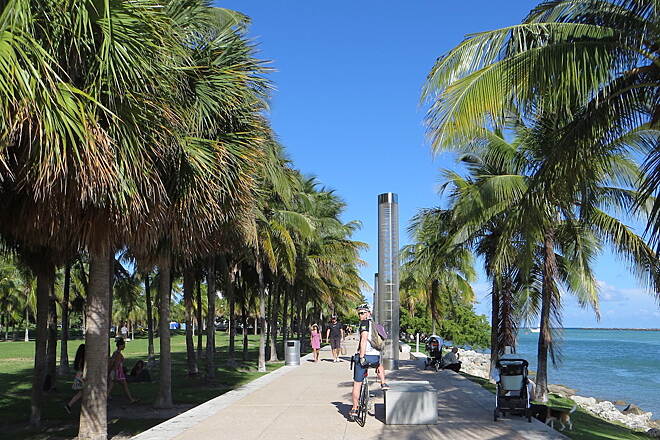 Surrounded by palm trees and meandering through South Beach, this trail (also known as the South Beach Trail) is nestled in one of the country's most popular destinations. Both of the trail’s endpoints are located in Miami Beach, with beautiful views of the Atlantic Ocean. As it draws closer to central South Beach, with its popular bars and hotels, the trail starts to bustle with foot traffic. There are large, grassy areas with exercise spots and volleyball courts, people longboarding, street artists, and plenty of individuals using the trail for access to the wonderfully bathtub-like Miami ocean water.

The southern endpoint starts on the northwest side of South Pointe Park—Miami Beach’s southernmost tip—before curving around the point to head north towards Surfside. The trail passes by the South Pointe Pier, where you can walk out over the water and take in stunning views of the Atlantic. Just behind the pier is an artfully laid out small park, with a winding trail and a small ice cream shop in the middle. Heading north, the smooth, concrete trail becomes increasingly dotted on the left with shops, hotels, bars, and restaurants. Interesting sculptures, rocks, and places to stop and rest pepper the length of the trail. You’ll also pass frequent water stations for washing off beach sand and several public restrooms.

A 7-mile segment of the trail is also known as the Miami Beach Boardwalk or Beachwalk. Despite the word "boardwalk" the pathway has a smooth, pattern-painted concrete surface. Running along the beaches of Miami Beach's Atlantic shoreline, this section passes by Ocean Drive Promenade, Indian Beach Park, Allison Park & Playground, the Miami Beach Playground (5313 Collins Ave), the North Shore Community Center, and numerous local businesses. From 5th Street at the south end of Lummus Park (1130 Ocean Dr), the pathway runs through North Shore Oceanside Park to 87th Terrace, where Miami Beach becomes Surfside Beach. For those on bikes, blades, or skates, please travel slowly and be mindful of pedestrians, who have right-of-way. Officially, pets are also not allowed, but there are those who risk the small fine to walk their dogs on the path. As long as the pets are on leashes, don't disturb others, and their human companions clean up after them, it is unlikely to be a problem. Please note that dogs are not allowed on the sand on Miami Beach.

From 87th Terrace, the Atlantic Greenway continues through Surfside and Bal Harbour, where it ends at the barrier island's northern shore. With the trail complete, it is possible to traverse the entire length of Miami Beach's Atlantic shoreline on paved paths. The Atlantic Greenway is also part of two much larger projects: the Miami LOOP, a developing 225-mile trail network throughout Miami-Dade County, and the East Coast Greenway, which is connecting trails from Florida to Maine. It is the final link in the Miami Beach portion of the East Coast Greenway.

For those driving, parking is available at numerous locations along the trail. Please see the map for all the options and detailed directions.

This is one of my favorite trails so far. Riding along with a view of the Atlantic was awesome. We started at the end which took us by the Boats or should I say Yachts wow to have that kind of money. The trail is awesome, but no E Bikes allowed so the 8 miles needs to be peddled. People issues around the main beach area but then clear sailing. Worth the parking hassle so don't miss this one!

This trail is site seeing for people, a whole culture with locals intermixed with vacationers. Trail is substantially longer than listed, about 7.5 miles now and a new stretch currently under construction. It’s a busy stretch so speed is a slower pace, but the people, workout areas, ocean, historic buildings, condos and resorts make this a fun day. Parking can be a challenge and we found it easier to park in the street near the south end and use their pay to park app.

I ride this trail several times a week. Since June 2021 it now stretches up 79th street and has many updated sections. It has very nice ocean views and generally good pavement. A few small sections have some bumpy bricks which isn't ideal if you're on a skateboard. After rainstorms it can be covered with sand and puddles in the morning, but city crews are pretty good about keeping it clean. There's not much shade so sunscreen is a must. The further south you go, the more congested it gets. Watch out for tourists on rental bikes in the south and stray cats in the northern half. At times, there can be lots of pedestrians so don't expect high speeds on this route.

I've cycled this gorgeous trail 3x, roundtrip in 2018/2019 from Haulover Marina/Beach to South Pointe Pier for a total of about 24 miles. I stumbled on it one Saturday morning in 2018 before construction started on the Miami Beach boardwalk (sad face) in 2020, and fell in love with it. I had no idea I could cycle that far and was blown away by the trail's beauty.

This was an awesome ride. Several people walking, biking and rollerblading. Certain areas were a bit congested but over all had a great ride.

excellent trail at night, not too many people. inline skating.

excellent trail at night, not too many people. inline skating.

We wanted to take this trail at its northest point near Indian Beach Park, just north of 41st street and go southward. Not possible. Bikes are not allowed on the boardwalk. Large signs posted by the city of Miami Beach. We had to turn around.

its a very short ride and i was expecting that because it says so in the description but what they dont say is half of the path is on wood deck and cobblestone, it caused $180 worth of Damage to my bike.