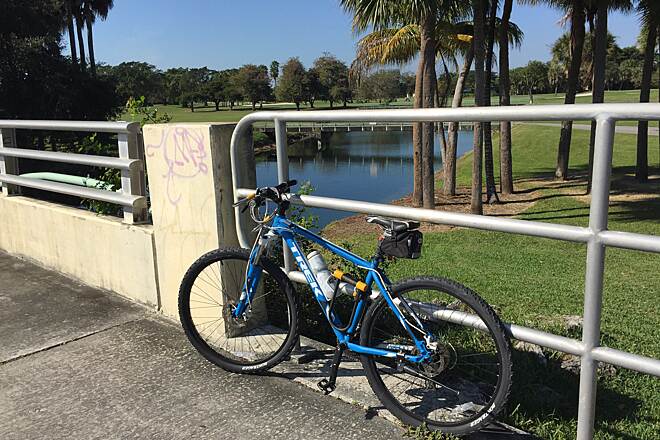 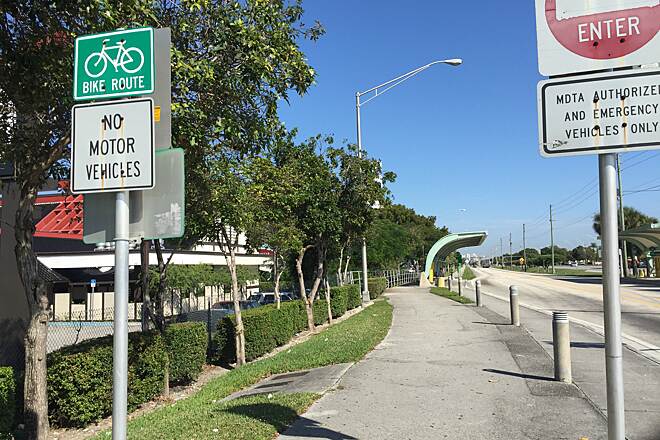 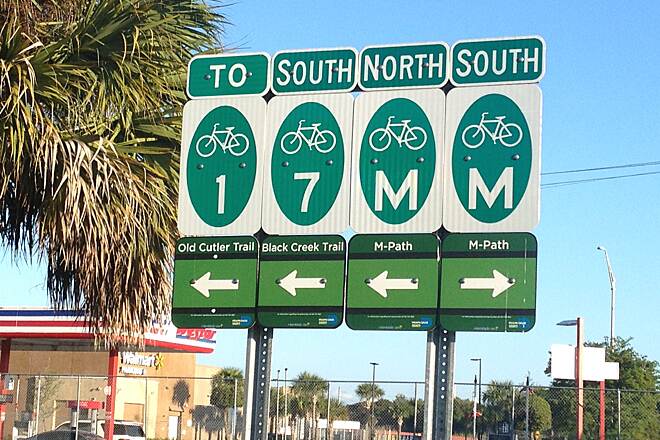 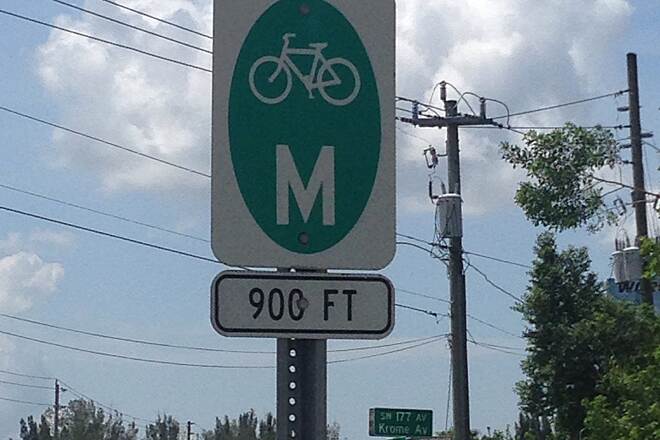 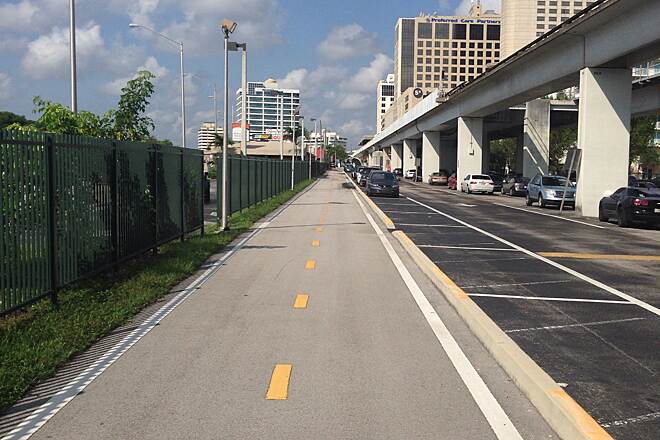 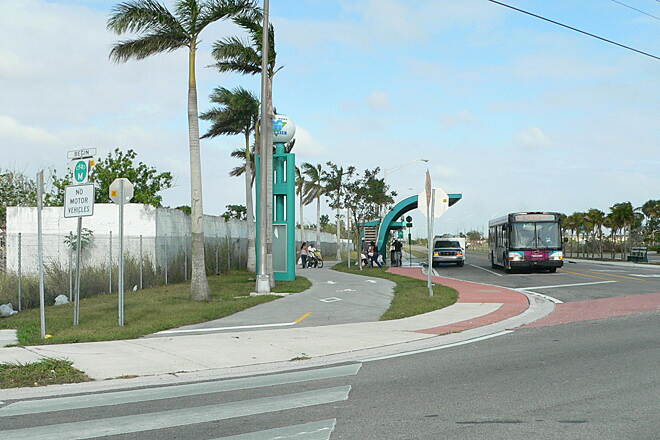 The South Dade Trail runs along the South Miami-Dade Busway between Florida City and Kendall Drive/ SW 88th Street just north of the Dadeland South Metrorail station. The trail connects communities from South Miami to Homestead. At Kendall Driver, however, the trail doesn't end. You can pick up the M-Path here and continue north to downtown Miami. The corridor is 31 miles long.

A component of the commuter corridor between Miami and South Dade County, this trail is nothing short of an urban adventure. Paralleling US Highway 1 for most of its length, the route was adapted for—and is largely used by—urban commuters seeking refuge from Miami's heavy traffic congestion. The trail connects such points of interest as the Dadeland and Cutler Ridge shopping areas and commercial office spaces. It also links up with the Metrobus and Metrorail lines.

Cyclists can stretch their legs on this fairly open trail, but you must wait your turn and use caution when crossing its many major intersections. Metrobus stations along the route provide plenty of parking, so you can pick up the trail just about anywhere. Dadeland Mall anchors the north end and Cutler Mall is about 8.5 miles south.

The best aspect of this trail is that all Miami-Dade Metro buses provide bicycle racks, and no special permits are required. So after a long day of riding, walking, shopping or sitting at your desk, simply mount your bike on the rack at the front of the bus, pay your fare and climb aboard—you've earned the air-conditioned return trip.

Dadeland Mall is on US Highway 1, just south of downtown Miami. The trail parallels the highway to the west.

The trailhead at SW 264th Street is on the west side of the highway, midway between Miami and Homestead; however, there are numerous places to park along the way.

it is what it is

Just finish the trail from Coral Gables Old Cutler to 114 Ave then the south Dade Trail for a total 28 Miles. The trail is still deteriorating and lots of intersections are under construction, closed or bad signal but was able to finish it without any real incident and very safe from traffic. Still goes through not the best parts of Miami but we are all aware this trail crosses several unpopular parts of the county. Will repeat it next year and hope it improves once the intersections are finished.

Terrible for a road bike. Most of the intersections are under construction, and the trail is generally not taken care of. It goes through some dodgy parts of Miami. I was very disappointed. I don’t know how this trail was rated so high.

I commute on this trail every day from Cutler Bay to University of Miami.
Overall its good. There is glass in areas where people from the neighbor hood linger. Its best to ride on the road to avoid those sections. The trail is being updated due to the BRT. Crossings the intersections is pretty easy, watch the buses, if they go straight then you can proceed. Be careful their are a few buses that turn. I would recommend catching the bus if you get a flat tire or if its starts to rain. Download the metro bus app or keep a couple of dollars to pay the fare. Also keep a couple of mask just in case.

Very usable but deteriorating and repairs make it worse!

I ride this at least three times per week. It's a great concept and originally worked well. It remains one of the only traffic free places you can ride in the area. Over the years, as another reviewer noted, the path has been deteriorating due to roots. What makes things worse is that repair crews come in, tear up the asphalt and the tree roots, lay down new asphalt and.... leave the surface worse than it was! The ineptitude is impressive. Ergo the trail has continued to deteriorate in many areas. Fortunately, about two thirds of it remains in pretty good shape.

The previous reviewer's comments about glass are very much on target. You would be wise to at least get on the bus way when you approach the shelters. However, I was told by the good folks at Elite bike shop, which sits on the path, that there are time in which bikers have been ticketed for riding on the Bus lane. I haven't had any issues so far but.....

If you ride down to SW 211 Street you can cut across US1-please be careful-and get on the Black Creek trail. This is a really nice paved ride alongside a canal that takes you to Blackpoint marina. It is quite pleasant, approximately 4-5 miles.

Summarily, I enjoy riding this trail and I recommend it but it is frustrating so see how it is being allowed to deteriorate by those with the means and the mission to keep it in working order.

Well, the fact that there is a trail to ride--without traffic, is awesome! Yes, there are minor issues to address, but to complain and write negative reviews/comments about this trail is uncalled for. I am grateful for it...and hopefully, one day, those minor issues will be improved. But for now, for those of you that are reading reviews, thinking about it taking the ride, just do it. It's fine.

First of all your description is wrong. This trail runs along the Busway Route which use to be railroad tracks but was paved over to be used exclusively for buses and law enforcement only. The north end of the trail starts/ends at SW 88th Street, not SE 88th Street. There is a separate bike/pedestrian path along the the Busway but in some sections can be very rough due to tree roots growing under the path. Behind the the covered bus benches there is usually broken glass I have ruined a couple tires and tubes on this. At intersection with traffic lights you must be wary of auto traffic pulling across the stop line and onto the crossing area. Also look out for traffic coming off US1. I also notices that further south along the trail, the bike trail switches to the east side of the Busway without any signage warning or telling of this. So I usually ride on the Busway itself to avoid all the hazards and pull off onto the smooth shoulder when buses are approaching.

morefun jumped the gun by about a year, I'd say. Though work began in January this year to create the link between M-Path and the South Dade Trail, the link won't be fit to ride for months to come. Part of the route was graded north of N. Kendall Drive, but further work has been suspended until the design-build contractor gets the plans approved. Meanwhile, northbound riders familiar with the area pedal through the Dadeland parking onto SW 70th Avenue, then cross SW 67th Avenue near Big Cheese to catch the present south end of the M-Path.

All of us in the area are excited that the construction has begun. It's going to be very helpful for bike tourists as well as commuters.

The South Dade Trail has now been joined to the M-Path trail which ends at Hwy 1 (S Dixie Hwy) just beyond Palm Drive (SW 344th St.) in Florida City.

The paved trail runs parallel to Hwy 1 along the Busway, most of which is fenced and closed to all traffic except buses and emergency vehicles.

This must be a little known fact because there is very little bike activity along the trail.