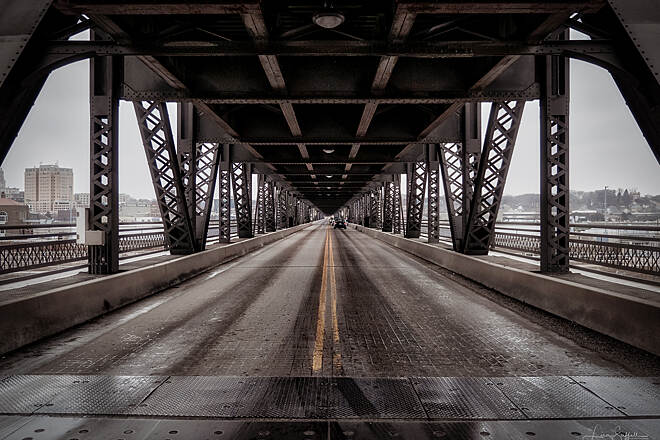 The Government Bridge is both an engineering marvel and a significant part of US history. The predecessor to the present-day bridge was the first bridge built across the Mississippi River. Three iterations later, this version of the bridge was completed in 1896 under the direction of Chief Engineer Ralph Modjeski, who would go on to design other famous bridges in cities across the US. The Government Bridge spans 1,854 feet, connecting Rock Island, Illinois, to Davenport, Iowa. It’s a swing bridge with a span that can swing a full 360 degrees to allow river traffic to pass. It’s also known as the Arsenal Bridge, since it technically starts on the Rock Island Arsenal, a small island in the river which hosts a US Army facility. The US Army still owns the bridge although it is open to the public.

The Government Bridge has two decks: the upper deck has two railway lines, while the lower deck accommodates vehicular traffic, with lanes on each side for pedestrians and cyclists. The deck surface is metal grating.

The bridge not only connects cities, but also two expansive trails. On the Davenport side, there is a ramp providing access to the Riverfront Trail. From the Rock Island end of the bridge, you can reach the Great River Trail by taking the multi-use path on the side of Fort Armstrong Road into the 24th Street. There’s a bike-ped bridge across the Mississippi between Arsenal Island and the City of Rock Island. The bridge lands right onto the Great River Trail.

In Rock Island, you can park at Schwiebert Riverfront Park (101 17th Street).From the park, follow the Great River Trail east up to the 24th Street Bridge onto Arsenal Island, and continue along Fort Armstrong Road to the Government Bridge.

In Davenport, you can park on the LeClaire Park & Bandshell (400 West Beiderbecke Drive).Take the Riverfront Trail east to the Government Bridge.

Great way to bike across the Mississippi

We did a ride combining short sections of the Great River Trail (IL) and Mississippi River Trail (IA) and used the Arsenal Bridge for one of our two river crossings. It has a separated bike/walk trail and it was easy to ride and fun to get a close up view of the Lock and Dam