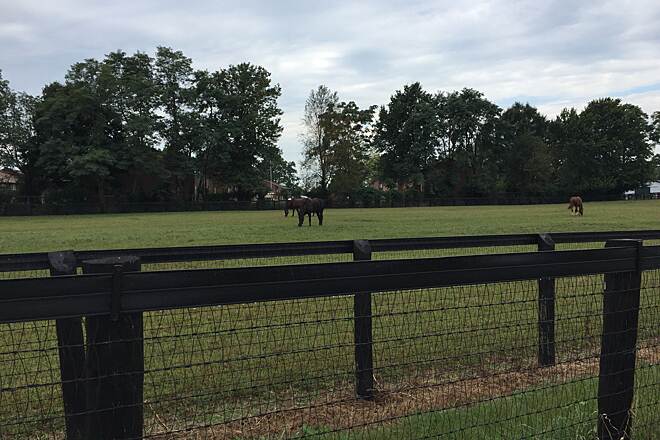 Although short in length, the Hope Center Trail provides an important connection between two other trails in Lexington’s northern neighborhoods. The paved, 0.3-mile pathway gets its name from the Hope Center, which is adjacent to the trail and provides shelter, meals and social services to the homeless.

On its west end, the Hope Center Trail meets the Legacy Trail, which spans 12 miles and runs up to Kentucky Horse Park. On its east end, the connector meets the Coolaven Rail Trail, which travels to Coolavin Park and the Transylvania University Athletics Complex.

Parking is available just a few blocks from the trail at Coolavin Park (551 W. Sixth St.).

Either there wasn't a sign for Hope Center Trail or I missed it when I crossed W Loudon Ave at the southern end of the Legacy Trail. I probably didn't do enough homework before my trip, and looking at this site almost 3 weeks after I biked it, I now learned that this short trail is named both Legacy Trail and Hope Center Trail. The red marked trail on TrailLink had Legacy Trail end at W Loudon Ave. Maybe there was a sign for Legacy Trail, which might have confused me, since I thought it had ended. Maneuvering through the gates by the railroad tracks was easy. When it T's into Coolavin Trail (which I learned on a map is also called Legacy Trail), the left/east will take you to an endpoint by a port-a-pot, where as the right/west takes you past the Coolavin Park until it ends. Some of the streets have green painted bike lanes, but even though I took a few of them, I really don't know where they go. All 3 trails make up the 12 miles listed under Legacy Trail (which had confused me if you read my review under Legacy Trail).