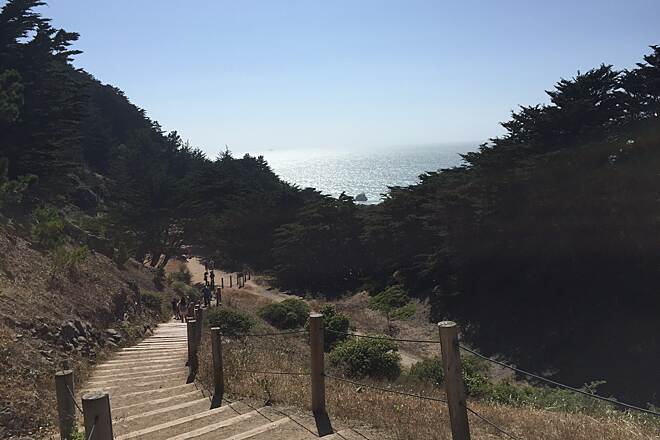 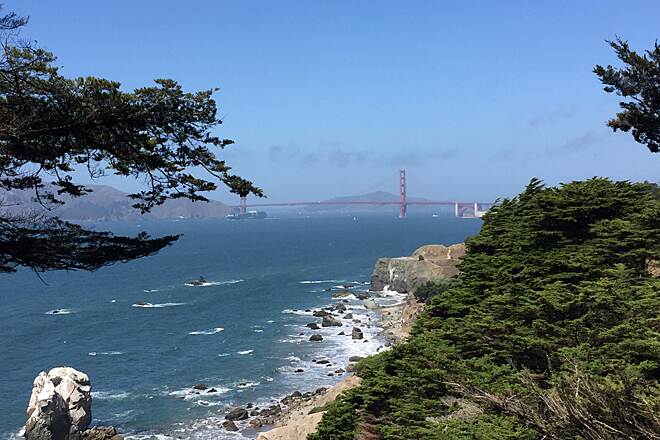 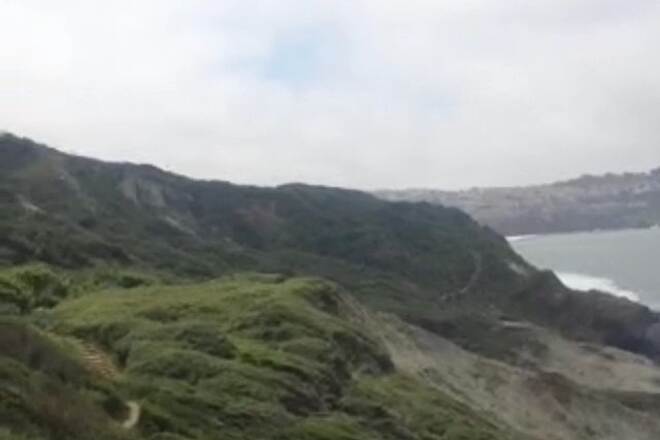 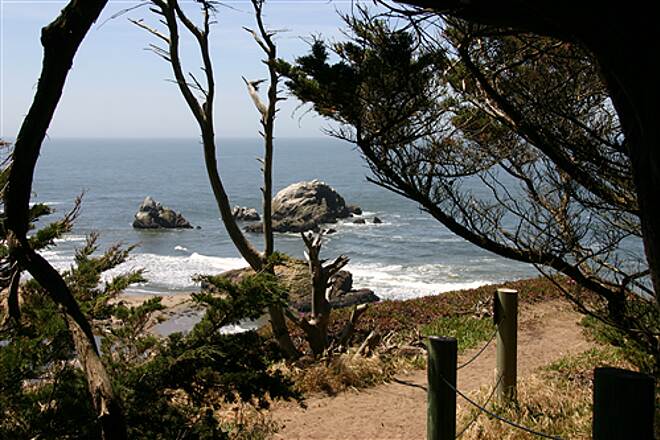 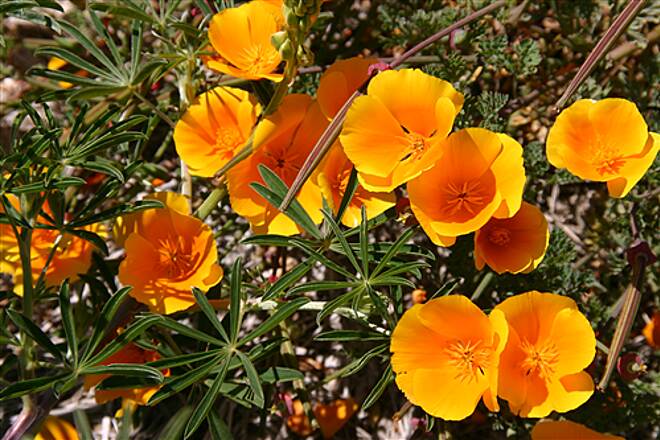 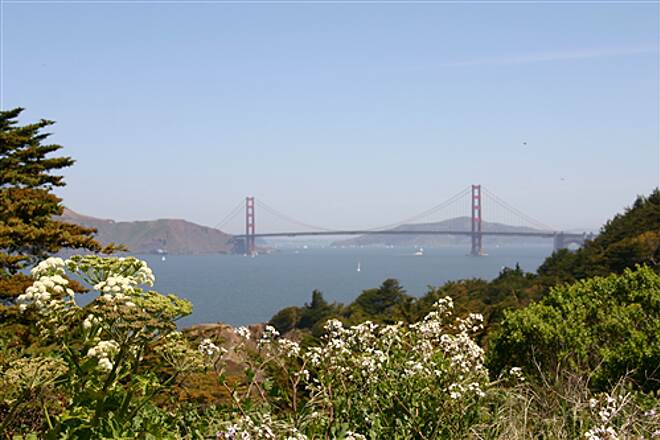 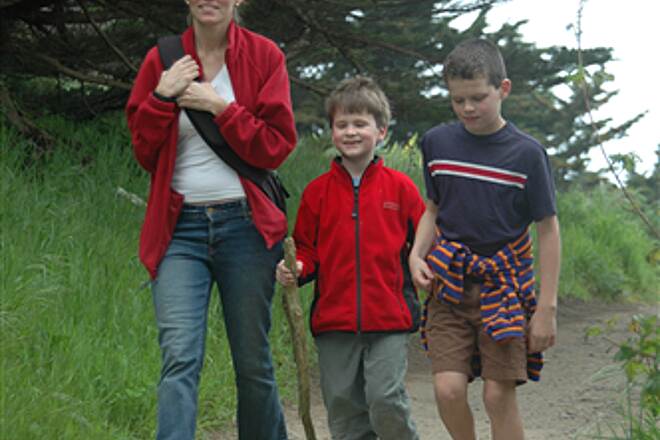 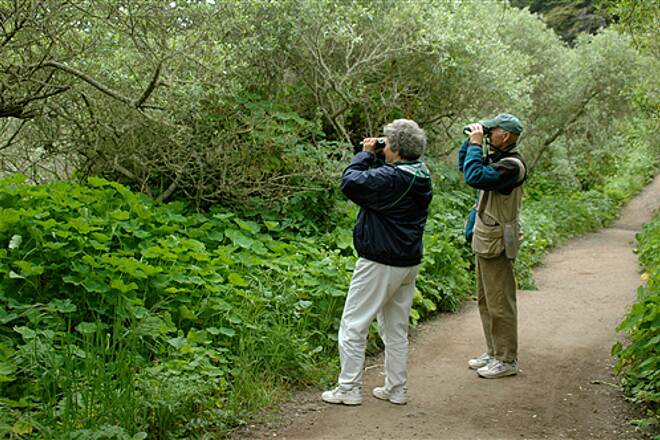 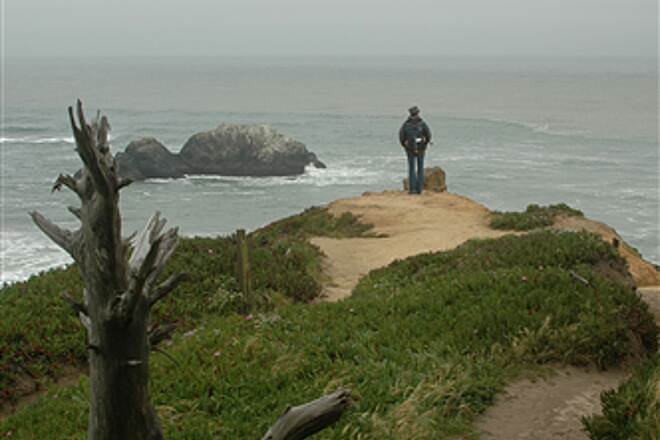 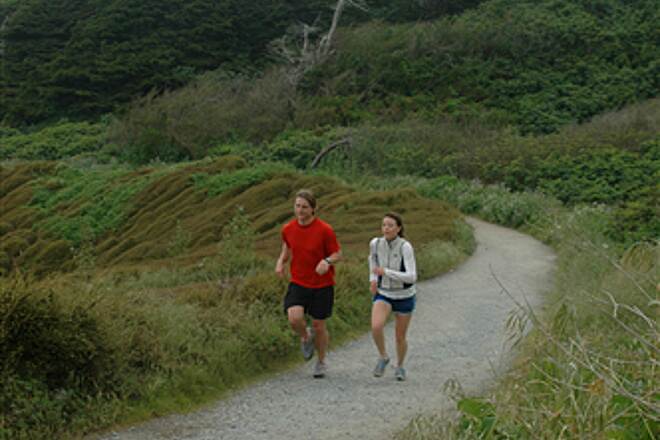 Riding high on the cliffs at North America's western edge, this San Francisco-area trail offers unbeatable views of Golden Gate Bridge and the Pacific Ocean at San Francisco Bay. Add to that a chance to see old shipwrecks, historical monuments, marine animals and birds (cormorants and oystercatchers, among others), and such San Francisco landmarks as the Cliff House, Sutro Baths and the Palace of the Legion of Honor, and you have the makings of a rich rail-trail experience. Be sure to bring your camera, and stop off at the several vista points (half-circle rest areas on the oceanside of the trail). Note: this is primarily a hiking trail; the route's narrowness, hilly sections, and staircases make it not well suited for riding a bike.

Lands End Trail has a colorful history. Gustav Sutro forged the corridor in 1888 as part of the Park and Cliff House Railway to bring San Franciscans from downtown out to the Cliff House resort and Sutro Baths that his brother, mining magnate Adolph Sutro, was building on the rugged San Francisco coast. For just 5 cents, passengers could enjoy a ride around Lands End in the railroad's open-air carriages. Today, the Cliff House, Sutro Bath and Lands End area are all part of the Golden Gate National Recreation Area, one of the largest urban national parks in the world.

Only the ruins of the once-grand Sutro Baths remain, and you can walk downhill (toward the coast) on a side path from the north side of the Merrie Way parking lot to see them. The Cliff House, the third building with that name on this spot, is an elegant place for a drink or meal with wonderful ocean views and is a short walk from the Merrie Way parking lot; just head west (downhill) on Point Lobos Avenue about 0.25 mile.

If you start from the Merrie Way parking lot, you'll see the Lands End trailhead at the north end of the lot. You wind up a slight hill, past where the Golden Gate National Park staff and volunteers have restored native vegetation along the trail route and thinned the cypress forest to open up views of the coast and of the rocky shores that have claimed more than a few unlucky ships. From the trail you can see remains of three shipwrecks dating from the 1920s and '30s. The year 1937 was particularly unforgiving: both the passenger ship Frank Buck and the freighter Ohioan were pierced by the same rocky outcroppings. In 1922 the Lyman Stewart went down in the same area. (From the northwest vista point at the bottom of the stairs to the USS San Francisco memorial parking lot, look over the edge. At low tide, you can spot the sternpost and boilers of the Ohioan). For remains of the other two shipwrecks, look carefully from the trail between the northwest vista point and the eastern end of the trail.

The middle stretch of the trail provides the best vantage point for viewing the Golden Gate Bridge and the Marin Headlands on the north side of the bridge. If you want to visit the Palace of the Legion of Honor, keep an eye out for a staircase heading uphill on the right, about 0.66 mile from your starting point at Merrie Way parking lot. The Palace of the Legion of Honor, a beautiful Beaux Arts building erected in 1921 to honor California soldiers who died in World War I, contains a highly regarded art collection, ranging from ancient pieces to European treasures, including a monumental cast of Rodin's "Thinker." Standing outside the building you can enjoy great views of the Golden Gate Bridge and San Francisco.

If you don't want to detour to the Palace of the Legion of Honor, then pass by the stairs leading to the museum parking lot, and stay on the trail, which is labeled as the COASTAL TRAIL, for another 1.3 miles of great bridge and coastal views. The trail ends where it intersects with El Camino del Mar near 33rd Street. To make this a loop rather than an out-and-back, you can pick up the El Camino Del Mar Trail from the Palace of the Legion of Honor overlook; it leads back to the memorial parking lot and the intersection with the Lands End Trail.

Be careful to stay on the trail in the Lands End area, as the cliffs are steep and slippery. The trail surface varies but is smooth, decomposed granite for about the first 0.66 of a mile from Merrie Way and then becomes a dirt trail. There are stairs to navigate about halfway through, and bikes are not allowed through this section.

There are multiple access points along the Lands End Trail. The western trailhead at Merrie Way parking lot is wheelchair accessible. From downtown San Francisco, take Geary Boulevard west about 5 miles. At 41st Avenue stay right because Geary splits and becomes Point Lobos Avenue. About 500 feet past 48th Avenue, turn right (north) into the Merrie Way parking lot, where there is ample parking.

Easy walk with stunning views of the GG bridge and the entrance to SF Bay. I’ve been visiting SF all my life; why I never heard about this walk until a child told me of it is a total mystery.

As a resident of San Francisco, I have enjoyed this trail many times because of the ocean views. Usually on foot but have done some of this trail on a bike. The paths can be steep and narrow making this trail a difficult one for some. Windy and cold most days. Must wear appropriate footwear. Spectacular sunsets!

Steps, half way from Lands End not possible to complete with wheelchair. First part is fine.