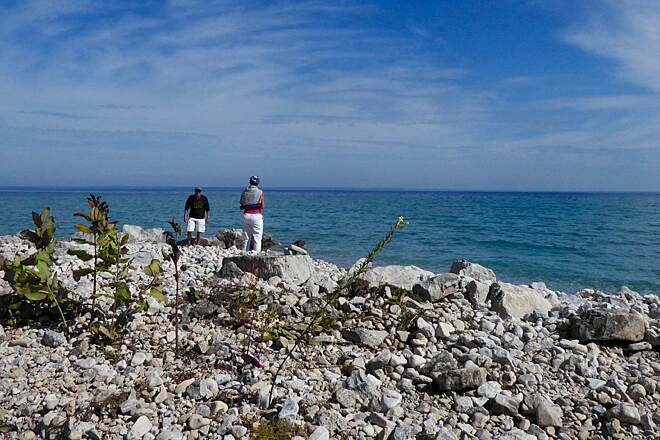 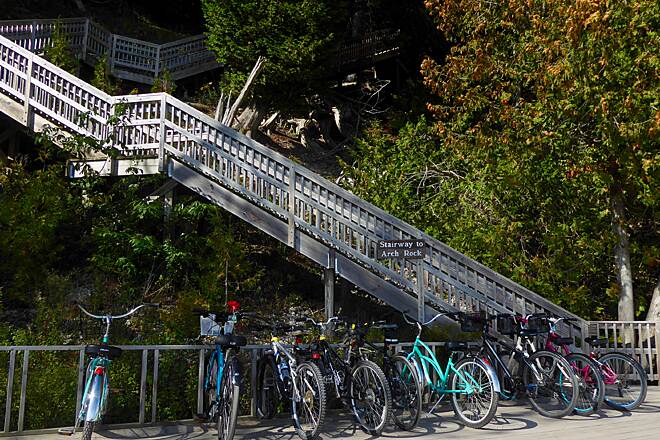 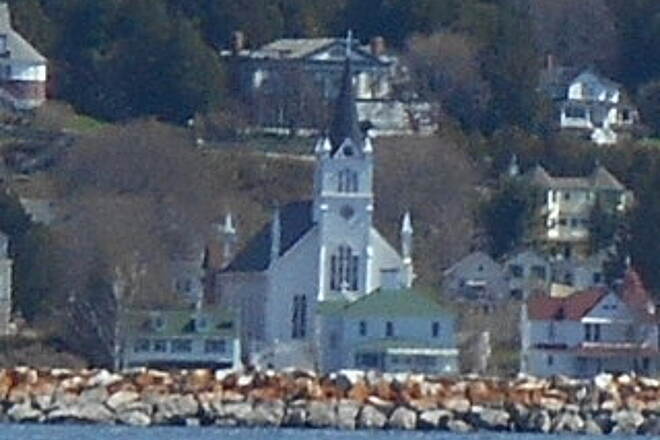 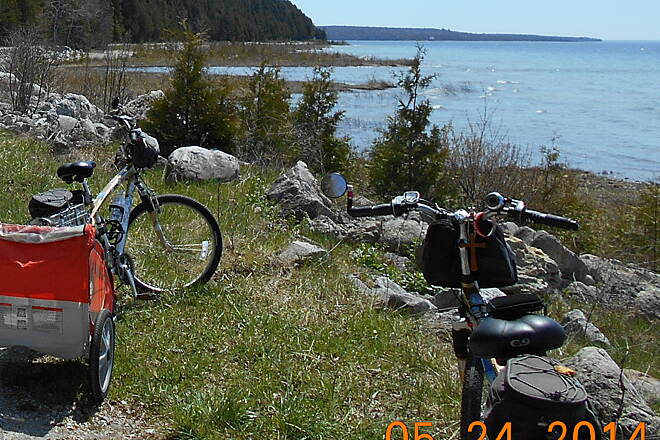 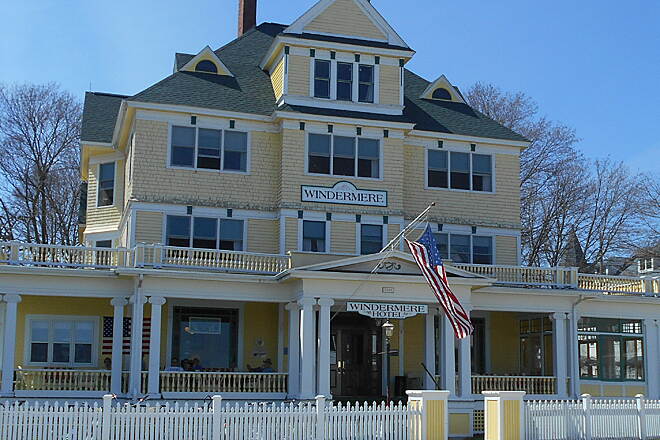 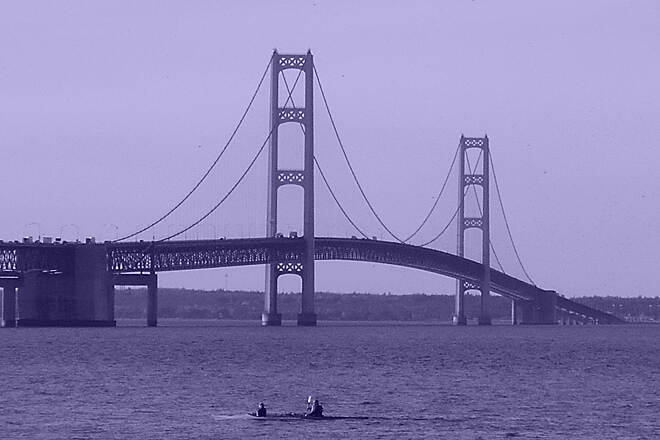 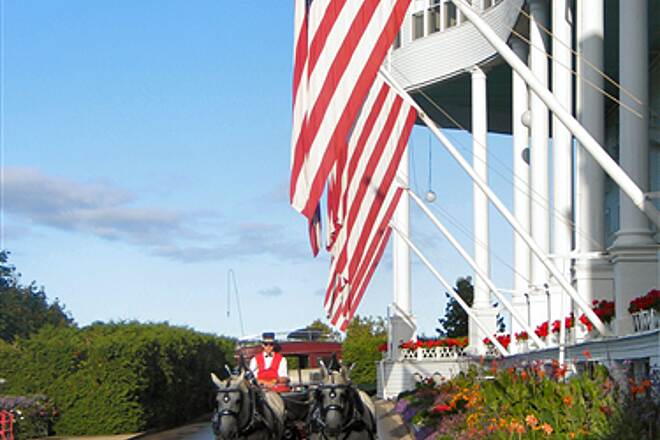 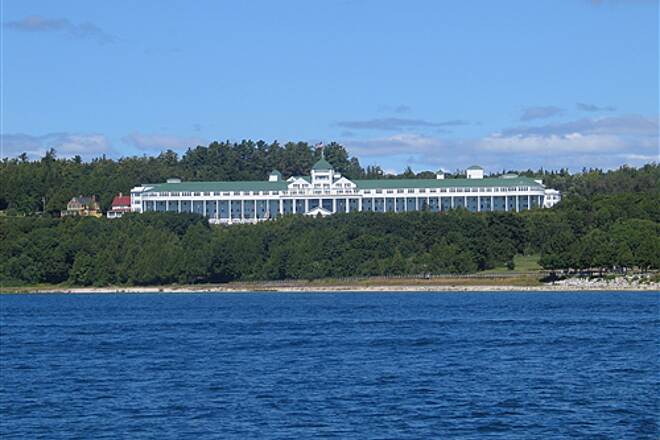 Mackinac Island is truly deserving of its status as one of the most popular tourist destinations in Michigan. Although small—less than 4 square miles—the island offers an abundance of natural and cultural treasures. With more than 80% of the land protected in a state park, you'll find dozens of scenic hiking and mountain biking trails through dense boreal forests in the island's interior.

No less beautiful is the island's coastal pathway around the perimeter, offering breathtaking views of Lake Huron, dramatic limestone bluffs and colorful wildflowers in the spring and summer. The trail is actually State Highway 185, the only such highway in the country that doesn't allow motorized vehicles. In fact, the entire island is car free, so expect to see heavy traffic by walkers, bikers and horse-drawn carriages along the way. Inline skates are also allowed everywhere except the downtown area.

Most visitors to the island will arrive by ferry. Bikes can be taken on the boats for a small fee, or you can easily rent one downtown (saddle horses are also available for rent). A good place to begin your journey is at the Mackinac Island Visitor's Center, only a short distance from the ferry docks on the south side of Main (Huron) Street. The center is housed in the large white building across from the open expanse of Marquette Park. Adjacent to the visitor center is the intersection of Main and Fort streets, the official starting point of M-185. From there, you'll travel east along Main Street passing charming boutiques, restaurants and resorts through the historic downtown. Be sure to look for shops selling the island's famous fudge!

Not long after rounding the southeast corner of the island, the roadway becomes known as Lake Shore Drive. Soon you'll approach the spectacular Arch Rock, one of the most photographed spots on the island. The rock formation rises nearly 150 feet above the water and spans 50 feet.

You'll continue north along the picturesque route, reaching Point aux Pins on the island's northern tip at the halfway point of your journey. After rounding the bend, you'll come to British Landing, a battle site in the War of 1812. The successful British invasion there lead to the surrender of Fort Mackinac by the U.S. Army. History buffs can explore Fort Mackinac on the island's southern end, only a short distance north of your starting point. The popular attraction, built during the American Revolution, offers interactive exhibits, costumed interpreters and reenactments of life there during the 1800s.

As you approach the end of your journey, reward yourself with a stop at another iconic landmark, the Grand Hotel. When the hotel first opened in 1887 (just 50 years after Michigan became a state), room rates were $3 to $5 a night! Notable guests have included five U.S. Presidents, Thomas Edison and Mark Twain. And, if the Victorian-era resort looks familiar, it's because it was featured in the romantic movie Somewhere in Time starring Christopher Reeve and Jane Seymour; the hotel even holds an annual convention for fans of the 1980 cult classic. Enjoy a meal in one of the hotel's dining rooms, or take a tour for a small fee.

If you're looking to continue your adventure, there are three great rail-trail options just across the water: the 62-mile North Central State Trail, the 32-mile North Western State Trail and the 26-mile St. Ignace to Trout Lake Trail.

The island is located in Lake Huron between Michigan's upper and lower peninsulas. Ferries are available from either side: St. Ignace (to the north) and Mackinaw City (to the south). Interstate 75 will bring you to the ferry docks of both cities and the boat trip will take about 15-20 minutes.

Good trail, flat and easy for the whole family, scenic views all along the way and you can stop to swim in the lake. We enjoyed a lot!

Enjoyable for the whole family

The whole family enjoyed this M186 perimeter trail around Mackinaw Island. All assortment of bikes are available for rent on the island from tandem to tag-alongs (for the kids) and amigo electric carts for the elderly. Riding this perimeter trail was the highlight of our visit to the island.

Where Parents Can Tell Their Children to Play on the Highway

Car-free Mackinac Island is life at Victorian speed. Main Street is packed with bustling commerce including freight hauling. Yet little children on tiny 12" bicycles, of which we observed several, are perfectly safe in the middle of the highway. It brought to mind a couple lines from Fred Reed's song about another famous Michigan icon, Mr. Ford: "Well it seems your contribution to man, To say the least got a little out of hand."

This is a "must ride" if you are planning a trip to Mackinaw Island. We have been coming here for nearly five decades when we originally took our bikes to the island on one of the ferries for FREE. Now, it is $10. This trip around the island is absolutely breathtaking with a nice spot at British Landing, at the halfway point, for having a picnic and taking a break. The views of the Mighty Mac as well as the Straits are beautiful. This is a really easy ride. We celebrated our 49th anniversary with this ride around the island in June 2016. But we also enjoy all the trails throughout the top of the island as well. You just have to be prepared for some hills. A tour of the Governor's Mansion on Wednesdays, or a tour of the Carriage Museum or the Butterfly Conservancy near the Grand Hotel are worth the climb up to the top of the island with your bikes.

Whenever we are on Mackinac Island we take this route. M-185 is "the only state highway in the nation where motor vehicles are banned".

The best way to do this is go counter-clockwise around the island. There are restrooms about half-way around. No need to worry about steep hills - there are none. Best views of Lake Huron and the Straits of Mackinac that you will find. Take some fudge home after your ride.

We had visited Mackinac Island a few times previously but this was the first time we took our bicycles. We visited on Saturday July 11, 2015. Both my wife and I said it was to date the best trail we have had opportunity to ride. We just got into biking a few months ago. The temperature that day was 82 degrees but there was a breeze blowing that made it very comfortable. The views as we rode around the island were beautiful. Had lunch on the island before the ride. The water there is very clear. We live on the south end of lake Michigan. It is hard to believe this is the same water. We will do this trip again in the future.

Great Place to Ride a Bike

I have ridden here a few times in the last couple of years. I find it to be a great car free environment. The only thing that bugs me about it is there should be a more in town traffic organization. There are people walking, riding bikes and horses everywhere going every which way. It's a wonder there are not more people hurt. But, when you get out of town there are many breath taking views. It's well worth the trip and if you can, bring your own bike.

This was a pretty great trip! As long as you stick to the map that's here on traillink.com you'll be mostly on flat ground. The scenery was wonderful and you have to take a ferry there. A lot of people when you first get to the island but it's slightly more isolated as you get further into the trail. I read reviews about this trail here as well and someone complained about the bugs. We ran into a few but nothing to bad. Perhaps it's just the time of year. Weather is absolutely great (We took this trip the second weekend in September. I really hope we can go again before the really cold weather gets here. They also have bike shops there in case you need last minute things or repairs. They also rent bikes out.

Overall rating...6 stars if it was an option!

The Island riding - something for everyone

I've ridden bikes on this island for decades. The first time back in the early 70s with a week long adventure from Saginaw to Mackinaw Island and back. And over the years and the many visits on the bike I've gotten to know the Island quite well. The Mighty Mack Bridge is always in view from the west side of island and the view from just about the entire circumference of the island on the trial is unmatched by any other. Period. The interior of the island has many hidden trials that must be discovered one at a time. The Fort Hayes (highest point) on the island will make you work to achieve the lookout vistas at 325 feet above the water. It is worth the effort. There are other trials that spider through the wooded areas near the Arch that are great riding. I like to explore - the new developments on the west side is a new addition to the Airport/Golf Course areas. The Main street tourist area is a lot of fun on it's own merit but the island offers so much more by bike.

Lots of people (of course, remember where you are!) but none were rude. Beautiful views along the way, take a camera. Didn't have time to go biking into the interior this time, but do recommend for the more adventurous.

If you are walking be prepared to be yelled at, cussed at, and ran over by bycyclists. The view is great, if your not watching your back to keep from getting hit.

My husband and I have been riding this trail for many years and we never seem to tire of it. Even though it is a small trail of only 8 miles, the views are fantastic! The trail is paved and mostly flat, but when you want a challenge of hills to your routine just exit off the path to one of the islands interior roadways. Along which you will find many historic sites and breath-taking views. The Mac Island Loop is friendly for families of small children, too! Just remember to teach them the rules of the road first! Also, if planning this trip there is an extra fee on the ferries for transporting your bike or you can rent bikes on the island for an additional fee. No matter which way you chose it is worth a trip over!