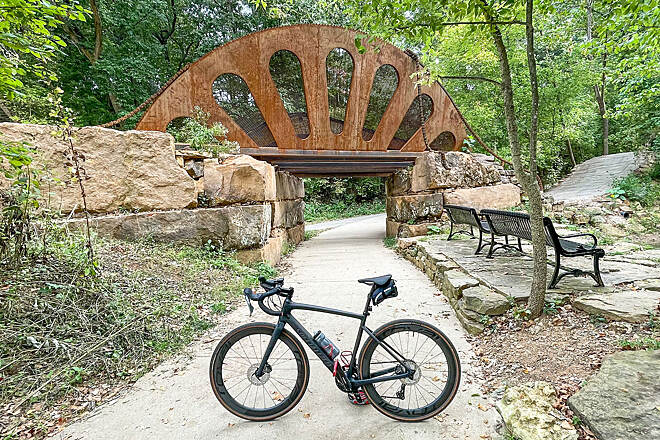 The North Bentonville Trail forms an arc around—you guessed it—the northern part of Bentonville, a growing city in northwest Arkansas. The scenic trail winds through woodlands and along a trickling creek for most of its route. At the trail's northernmost point, mountain bikers can access Slaughter Pen Mountain Bike Park, which features over 14 miles of single-track trail for riders of a wide range of abilities.

At this same point, the paved Wishing Springs Trail continues north along McKisic Creek, ultimately linking to the Bella Vista Lake Trail encircling the lake and park of the same name. Due south of the junction, the North Bentonville Trail provides access to Bentonville's popular Bark Park, a fenced-in area allowing off-leash play for dogs and their owners.

Continuing southeast along the other leg of the trail, users will eventually meet NE A Street. A short section of the trail here is immediately adjacent to the roadway due to limitations of the site (bounded in by a waterway and steep rock face), but concrete Jersey barriers protect trail users from cars for the entirety of the brief stretch.

From the trailhead at NE Cub Circle, trail users can continue due south on the Crystal Bridges Trail to reach the Crystal Bridges Museum of American Art, which features a striking design, extensive collection and free admission. Just beyond the museum, the trail emerges at the northern edge of downtown Bentonville.

The eastern leg of the North Bentonville Trail, along with several other trails in the city's impressive system, is a central component of the Razorback Regional Greenway, a 46-mile, primarily off-road, shared-use trail that extends from southeast Bella Vista to the southern edge of Fayetteville.

fairly level and access to all level of difficulty unpaved trails

We ride the pavement which was in perfect shape and not overly crowded. But the paths on both sides of the trail were calling to us. Would be a great place to learn to mountain bike and also has access to a wide variety of trails.