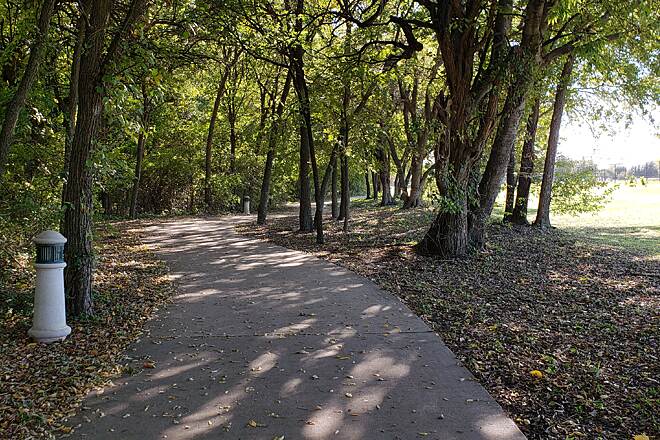 The Serenity Park Hike and Bike Trail winds through western McKinney, a fast-growing community about 30 miles north of Dallas. The trail begins in its namesake park and follows a tree-lined route south through the Stonebridge and Craig Ranch neighborhoods. Evans Middle School and Reuben Johnson Elementary School are adjacent to the paved pathway. Along the way, several tunnels allow trail-goers to bypass busy streets, such as the Eldorado Parkway. Another path heads west from Eldorado and threads through Gabe Nesbitt Community Park, continuing  along Cottonwood Creek.

There is a trail head with a parking lot at the north end. What I like about this trail is that it connects to other trails as you keep going south so if want to stay out longer it's very easy.

There is a trail head with a parking lot at the north end. What I like about this trail is that it connects to other trails as you keep going south so if want to stay out longer it's very easy.

I ride this path a lot because it is in my neighborhood. Going south, the trail actually goes under Mckinney Ranch and continues all the way to Collin Mckinney Pkwy where it dead ends at the creek/dead end bridge. I like the scenery, creek, ponds and multiple tunnels you travel through.

a little above average

Decent trail. Bumps along the way but it’s largely maintained well and connects to bike boulevards.

One of the better bike routes in McKinney

Compared to neighboring cities like Plano and Richardson, McKinney lacks extensive bike paths. The few paths that do exist do not connect in a way to allow cyclists to cross the city. But, as trails and paths go, the Serenity Park Trail, for lack of a formal name, is very well maintained. At the northern end, there is a small neighborhood park, Serenity Park, with parking and drinking fountains. The trail heads south, with a sharp curve leading to a tunnel underneath Eldorado Blvd. The trail emerges on the south side of Eldorado near the newly-constructed John and Judy Gay Library.
You can follow the trail west to Gabe Nesbit Park, or continue south. There are tunnels underneath Ridge Rd, Woodson Dr and Ash Ln. Pass Reuben Johnson Elementary and follow the trail along a narrow creek greenbelt area, through the tunnel at Lake Forest Dr, then another tunnel at Highlands Dr. The trail ends at McKinney Ranch Pkwy. It looks like more construction is planned, and my hope is that it will connect to an existing trail running south from Aylesbury Ct adjacent to Jesse McGowen Elementary, and that it might be extended into Allen, which already has some rather impressive trails.
My only complaints are that the trail is a little narrow for cycling, there is limited visibility on some curves, and the street crossing at the intersection of Pine Ridge and Anita is pretty busy, so be cautious.
Always wear a helmet when riding. Be courteous. Announce when passing. And have fun.