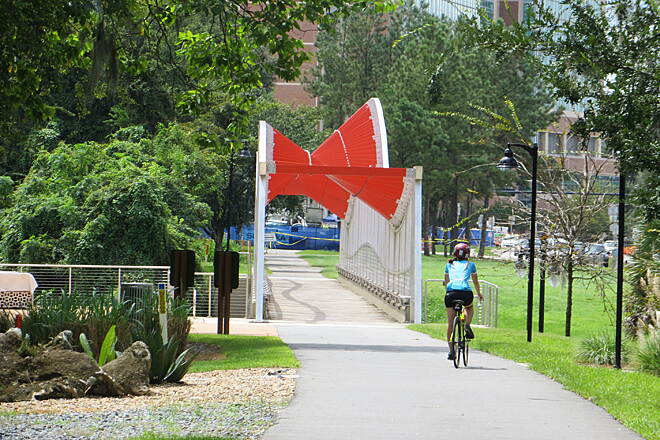 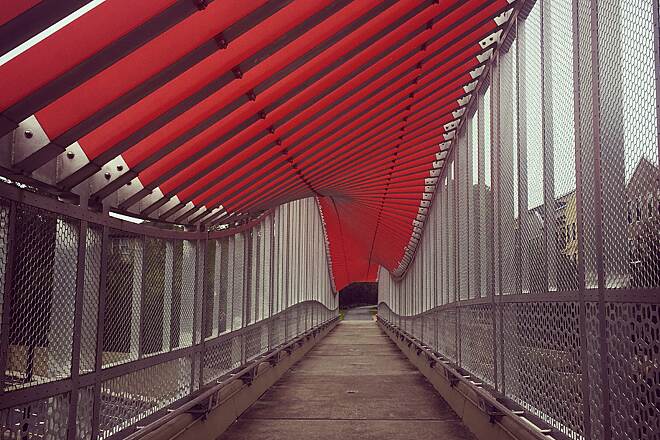 The Waldo Road Greenway, Depot Avenue Rail-Trail, and Kermit Sigmon Bike Trail are seamlessly connected as part of Gainesville's ever-expanding rail-trail network, offering users three trails in one. Together, they comprise a 6.4-mile path that links neighborhoods, businesses, transit stops, a private aviation terminal and the University of Florida campus. Trail goers can cross SW Archer Road to connect to the UF Campus Greenway to cut across the school grounds.

At SW Depot Avenue and S. Main Street/SR 329, the trail connects with the scenic Gainesville-Hawthorne State Trail. While there are no formal trailheads, you can access the route from a number of road crossings. Additionally, the Gainesville Depot has been restored and offers limited parking at the intersection of South Main Street and Depot Avenue.

At the north end the Waldo Road Greenway is particularly well landscaped and passes numerous public transportation connections. Be aware that the trail narrows at intersections and at a couple of the transit stops. The Depot Avenue Rail-Trail picks up just beyond 2 miles from the Waldo Road/University Avenue intersection. Threading through neighborhoods and industrial areas, it never loses its community essence.

Across the trestle, you'll join the Kermit Sigmon Bike Trail. Named for a local mathematics professor and great bicycling advocate, the trail leads west past both Shands and Veterans hospitals, and hospital employees use it as a commuter corridor. Although the route continues another 2 miles west, it's probably best to end your trip here; the Archer Road crossing poses a significant hazard, and its narrow sidewalk flanks the wrong side of the road for westbound cyclists.

The route offers numerous access points, particularly along Waldo and Archer roads, where the trail intersects with SW 13th and South Main streets, and on several side streets. Additionally, the Gainesville Depot has been restored and offers limited parking at the intersection of South Main Street and Depot Avenue.

Great trail to commute to UF from 34th.

The trail does connect to the Gainesville-Hawthorne trail. Just go from 34th and Archer east and cross Williston Rd.

It would be great if this trail continued north past the airport to Waldo. It could be a connector between the Gainesville Hawthorne Trail and (nearly) the Lake Butler Palatka Trail, not to mention it would make commutes along Waldo Road and it's 65 mph speed limit a whole lot safer. Most map services, like google for instance, show the trail continuing all the way to the town of Waldo.

Will this ever be extended into a Gainesville - Waldo Trail??

"This trail has been extended west nearly to SW 34th Street in Gainesville. There is a good bike shop on the south east corner of Archer Road and SW 34th Streetnext to Radio Shack. I haven't seen any evidence of a new connector to the Gainesville-Hawthorne trail, although you can take surface streets to it.

The western portion of the trail is commonly used by students traveling by bike or foot power to the University of Florida. To the west of 34th street, you can ride the sidewalk (carefully, watch for cars turning or not stopping for you while accessing parking lots, it's not for the meek) past I-75. There are bike lanes on Archer Road west of I-75, but there are also sidewalks which are hardly used and away from one of the most heavily travelled roads in Gainesville.

The sidewalks go past 92nd Street and more are being built. I have used this route several times to pick up rental cars at the airport, about 15 miles away.

The railroad depot area downtown has been painted. Nearby are some monuments worth looking at. They are large cememt castings, embedded with fractured remains of several expensive bicycles. The riders lost their lives several years ago after they were run over by a driver who was sightseeing on US 441 south of Gainesville. Route 441 goes through Paynes Prairie. Recently this scenic truck route has been widened for bike lanes and rumble strips have been installed, but the lanes are still part of the road.

The Waldo Road Greenway trail is good for transportation and less effective for sightseeing and relaxation. It does go by the south side perimeter of the University of Florida. The roads within UF have an enforced 20 mile per hour speed limit and make an enjoyable ride by themselves.

I can provide high res digtal photos of the area's trails and attractions for publication."

"The trail runs through some of the lesser neighborhoods of Gainesville. The area is a high crime, low income area. Women should not take trail without escort or some pepper spray."

"This urban trail is accented by landscaping, but pales when compared to the nearby Gainesville-Hawthorne trail. The trail has been extended to the northeast and now runs to the Gainesville Airport."