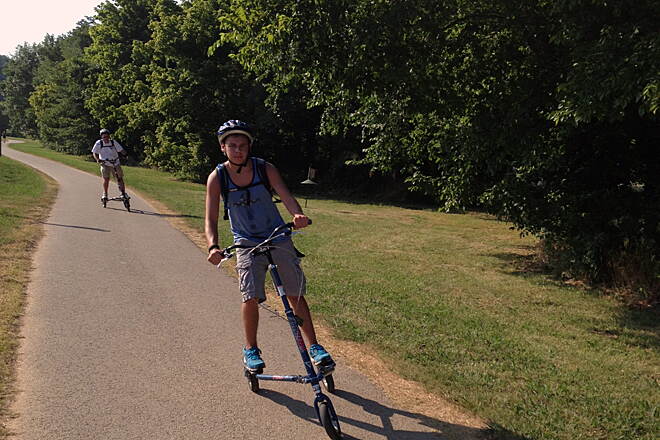 The Wishing Springs Trail is a crucial link between two popular trails in Bentonville's extensive system. In the south, the trail begins at a junction with the North Bentonville Trail, which branches out in two directions: due south leads to Bentonville's Bark Park, while the longer southeast route heads through woodlands, inching closer to the city's core. At the Wishing Springs Trail's northern end, the path feeds into the Bella Vista Lake Trail, which forms a loop around the scenic lake and adjacent park.

That is not to say that the Wishing Springs Trail itself lacks scenery. In fact, the trail features some of the prettiest views in the trail system, as it undulates beside McKisic Creek for its entire length. While minor hills might prove a challenge to some, at least you'll never have to stop for traffic: the trail has no at-grade crossings, featuring several underpasses of US 71 and its spur roads.

The Wishing Springs Trail, Bella Vista Lake Trail and part of the North Bentonville Trail are also the northernmost components of the Razorback Regional Greenway, a 46-mile, primarily off-road, shared-use trail that extends from southeast Bella Vista to the southern edge of Fayetteville.