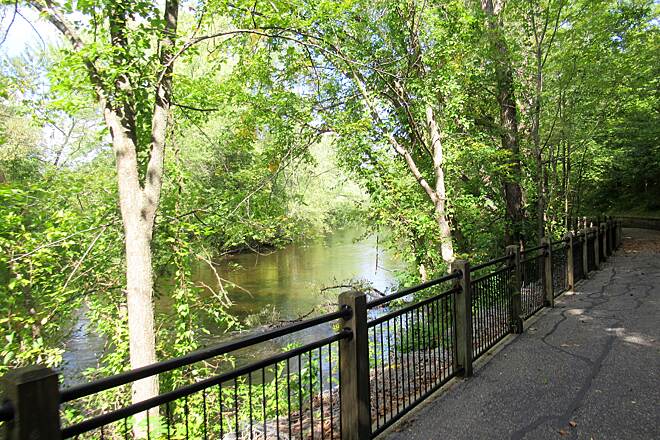 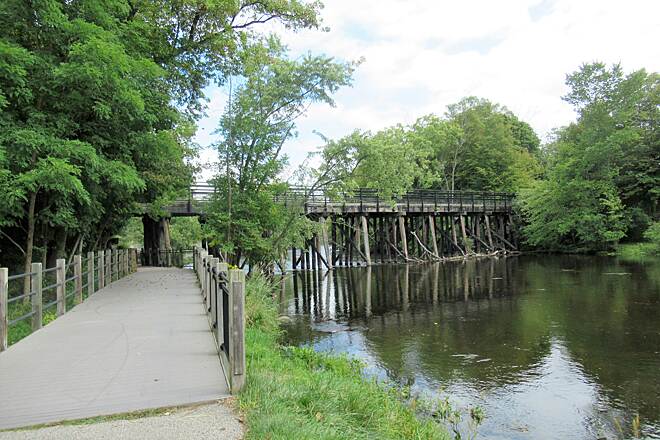 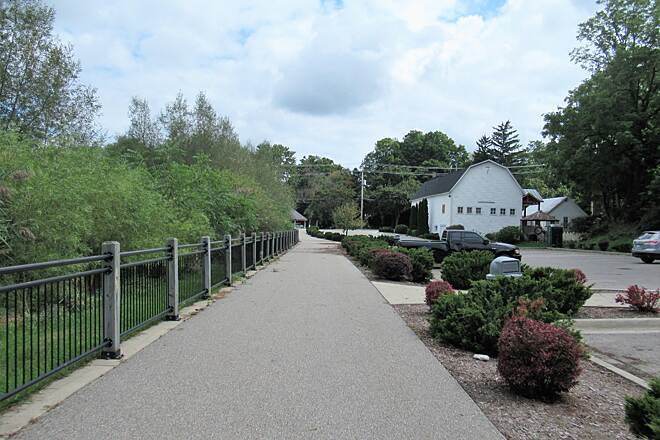 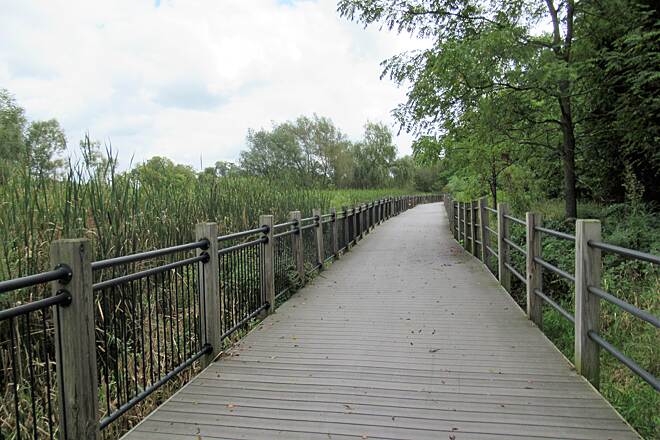 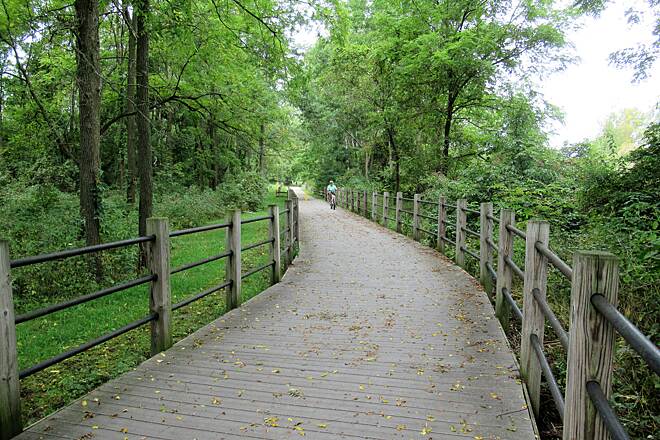 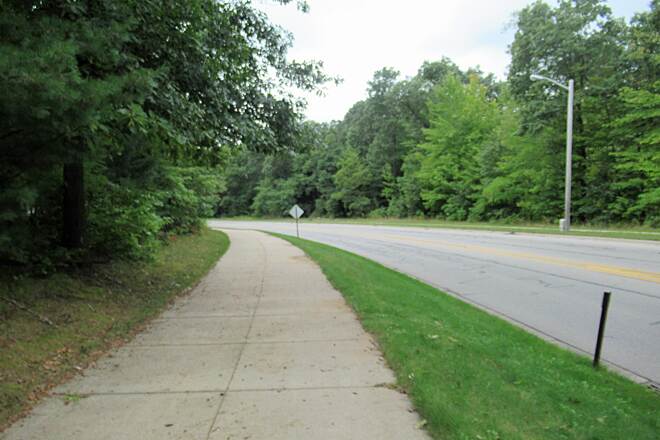 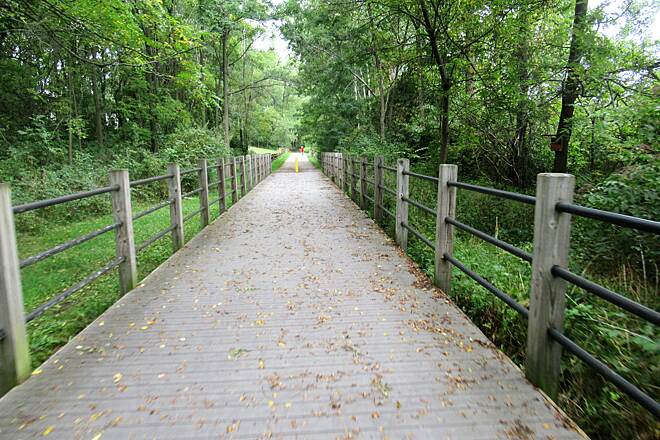 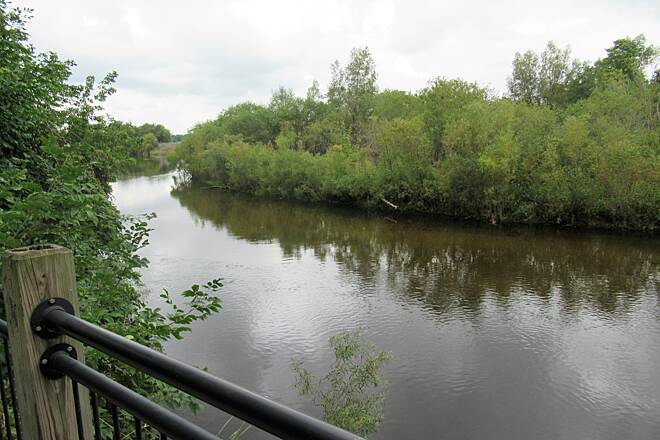 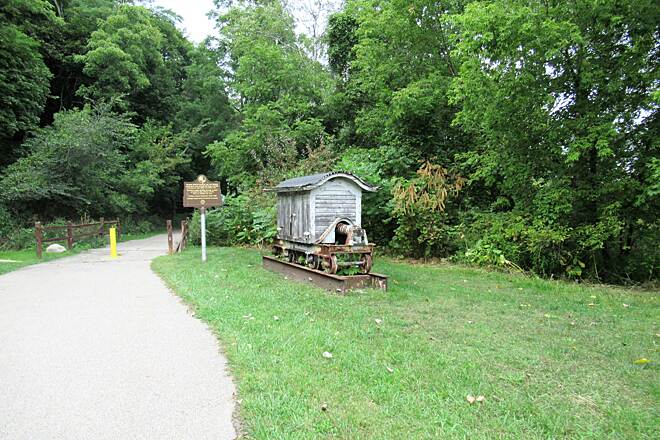 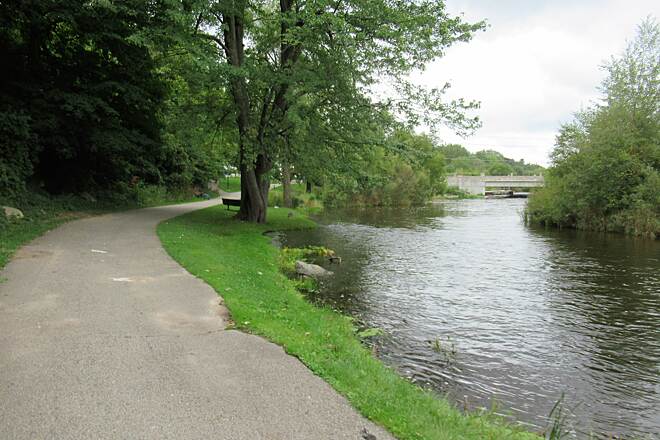 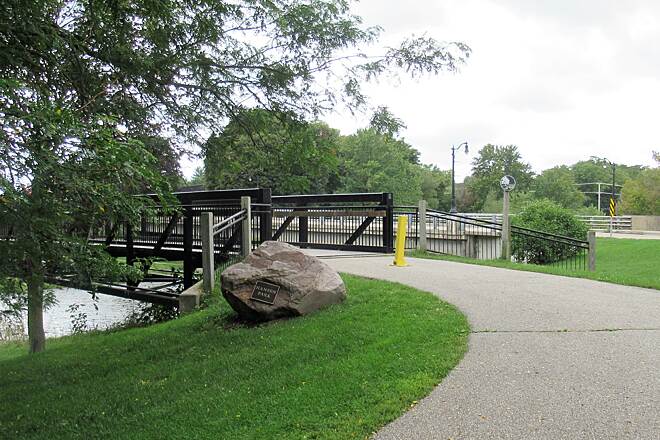 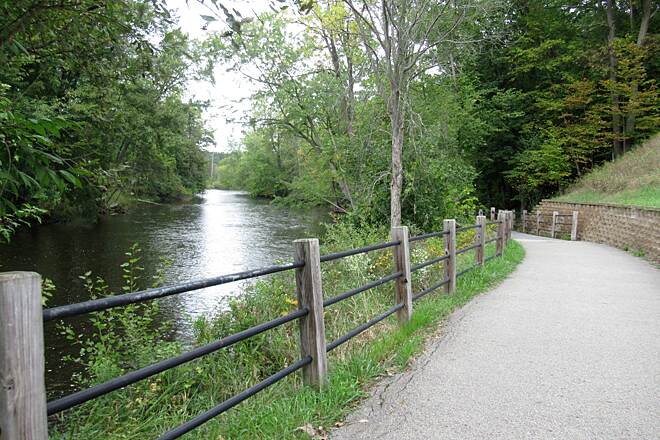 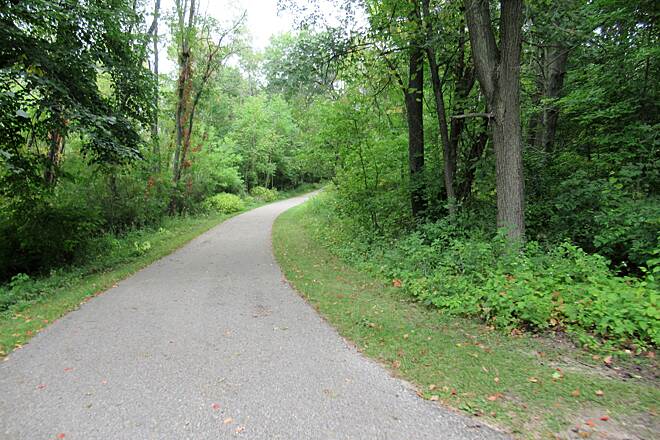 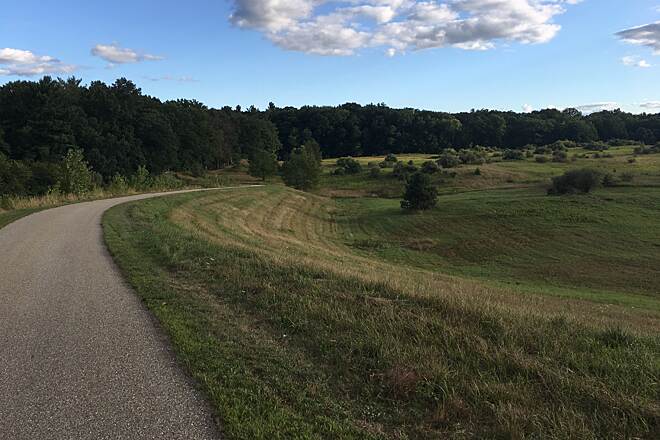 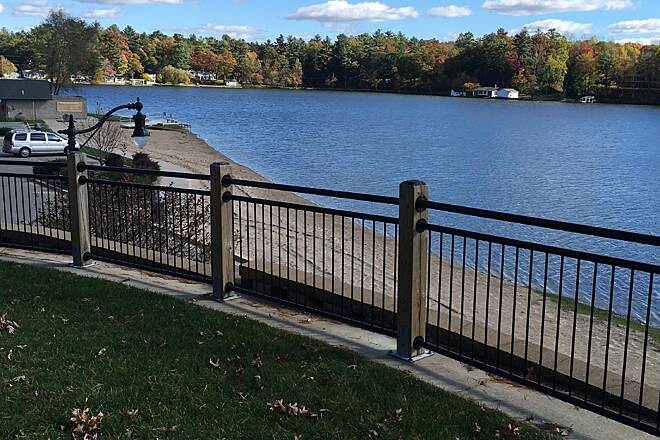 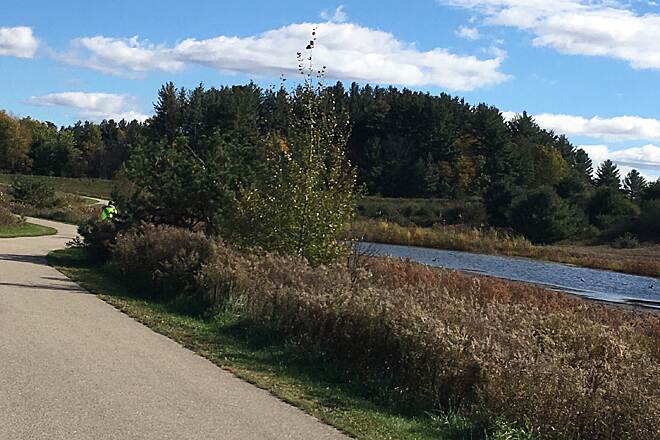 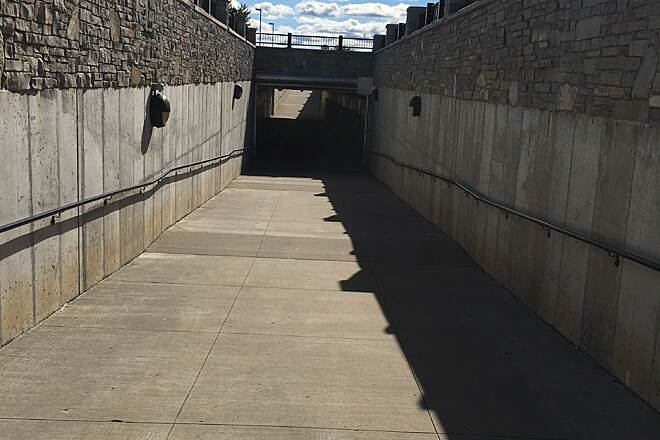 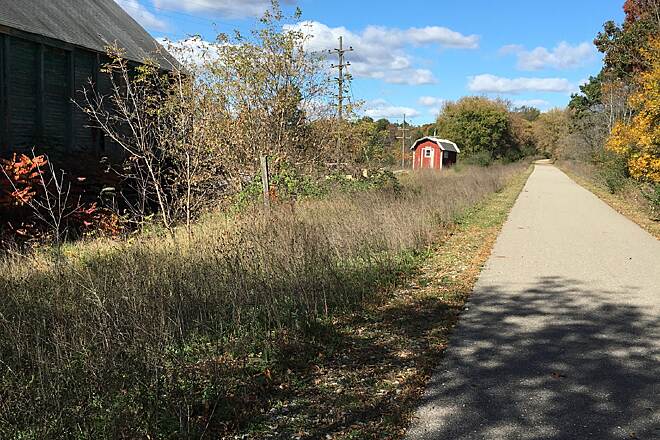 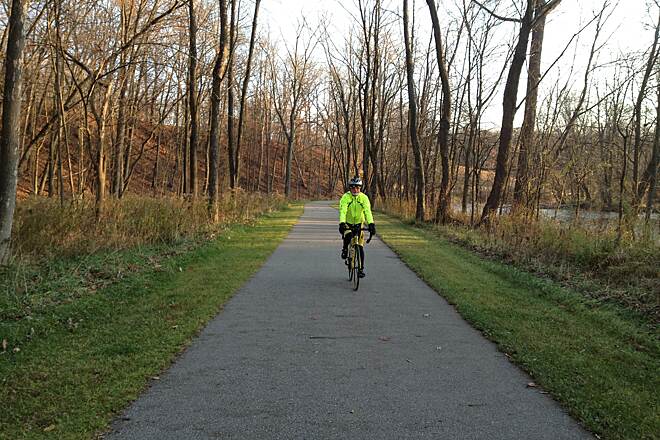 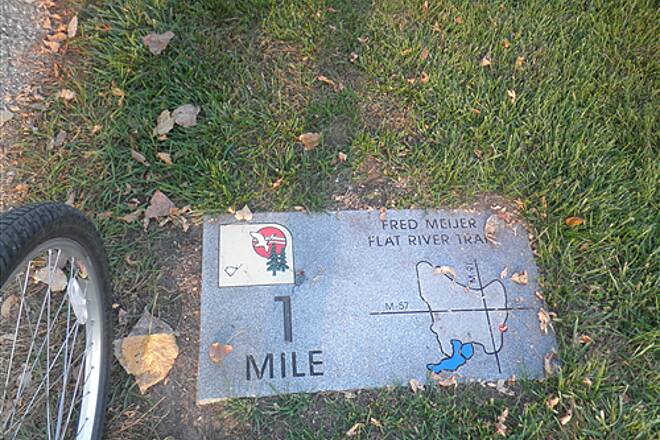 Like the two longer trails (and several other trails in Michigan), the Fred Meijer Flat River Trail is named after the grocery magnate and philanthropist who generously contributed financially to its development.

We parked at Jackson's Landing trailhead. Large paved lot and portable restroom.
Trail is asphalt paved and plastic decking. The plastic decking sections are extensive and very rough and bouncy if traveling at a decent speed.
The trail goes along the Flat River. Coming out of Greenville the trail is more of a paved sidewalk, up near the High School.
Trail services include eateries nearby since most of this trail is within the city limits.
You can also access the Heartland Trail from Jackson's Landing trailhead.

A mix of river trail with city trail but the opportunity to pass through the Baldwin Lake is really awesome. My wife and I really enjoyed this trail.

A little bit of everything

Rode this trail this past weekend. Loved it (even though it was only 45 degrees). We started at Tower park and rode all the way to Baldwin Lake. Then rode back and stopped into town for lunch (our normal routine for weekend rides). I enjoyed it mostly because of the variety. You start off in the park, wooded area, very nice boardwalks over marshes, then through more woods. (We did take a wrong turn shortly after we got out of the park, but luckily I noticed it right away because I had my Traillink map downloaded and GPS going.) After a couple miles, we ended up on a double wide sidewalk through town. The seams in the sidewalk were a little annoying but it's all part of the adventure. This takes you through town and into the awesome tunnel under M-57. (I love tunnels). At this point, Meijer is on your right but if you keep following the trail you end up in on open rolling field area that heads down to Baldwin Lake. Of course, in November it was too cold to enjoy the lake but that would be a nice break in the middle of summer. The trail in whole was enjoyable and we will be back again.

I did part of this trail today - would have done the whole thing but quite frankly I kept getting lost (I cant read a trail map if my life depended on it). I did 58 miles on the FM Heartland Trail - from Greenville to Vestaburg. I had planned on Greenville to Alma and back (80+ miles which would have been my longest single day ride to date) but when I got to Vestaburg I was not sure I was up to the full 80+ miles so turned around and headed back (after ice cream of course) However as approached my car in Greenville I was still feeling feisty so picked up another 10+ miles on the Flat River Trail. Some wonderful views and a few curves that made a slow roll on the trail the perfect finish to my day!

There are manhole covers about every 100 feet on this trail, at least as it leaves Greenville at the trailhead parking area. There are also dangerous road crossings, especially near Greenville Tool & Die. Some pretty wetlands, but not a relaxing ride when one is dodging covers and crossing streets. Try the White Pine Trail instead.

Great trail for leisure and fitness.

As the other reviewer mentioned; you will not want to use this trail for speed biking, too many twists and blind corners. There are more pedestrians than bicyclists so that is another reason to keep it fairly slow. But for pure pleasure and to help keep in shape it is a great place to bike. The views are beautiful especially around Baldwin Lake and the broad meadows behind the Meijer store (careful of the goose droppings though). There are enough uphill grades to get your heart pumping as well as the downhills to glide. With many connectors from the trial to local neighborhoods, you can really create your own route/distance. There are also several parking lots/parks with facilities so you can start pretty much wherever you wish. My wife and I usually start at the Meijer parking lot. We ride the trail several times a week. A great deal of boardwalk goes through high water areas (is there a nicer way to say swamp?), with several rest stops along the way. Other local businesses and individuals have contributed benches and other rest areas.

One of the great things about the Flat River trail is that it connects to the Heartland trail as well. You can take a ride from Greenville to Alma or beyond.

Scenic trail with some challenges.

Started at the Baldwin Lake trailhead. Did the whole ride easy one way then faster the way back. Nice to ride along the river in some parts, open prairie in others, and even some city. The only road share is around Baldwin Lake where speeds are no more than 10mph for cars. Take a dip in the lake when your done.

Variety all the way.

I first should say, if speed cycling is your thing, this is not for you. Otherwise, this is one great trail!! From meadows, dense forest, wetlands, wooded riverside, and lakeside to strip malls, a Meijer supercenter, restaurants, fast food, and convenience stores to parks, museums, and a swimming beach, I can't imagine anything more being packed into an 8 mile trail. And with a little street navigation, I was able to make it a full circle ride with new scenery from start to finish instead of seeing everything twice that goes with the typical "up-and-back" ride. The 1.5 mile section north of the tunnel under M57 is probably the least interesting as it is basically an expanded sidewalk alongside a four lane road. Most of the trail is relatively flat. But on the southwest side of town, there are a few grades between the tunnel and Baldwin Lake that could challenge the casual rider.

A counterclockwise ride makes the street connection at Baldwin Lake the shortest. After the switchback to the bottom of the hill where the trail ends, take a left at the beach, follow Baldwin Lake Drive around the north cove of the lake. Just past the public boat trailer parking, the road turns into one-way. Take a left at the next T-intersection to Tower Park where you can pick up the trail again. I rode clockwise and had to ride around the south side of Baldwin Lake because of the one-way street, although the additional mileage was still very enjoyable. I had a great view of the beach and the switchback on the opposite side. Either way, I would advise printing out a map of the Baldwin Lake area to take along. It took me awhile to figure things out without one.

The paved Fred Meijer Heartland Trail rolls for 42 miles through farmland and forests in central Michigan as it links a half-dozen rural towns with...

The Fred Meijer Grand River Valley Rail Trail is one component of a network of trails in mid-west Michigan that, when complete, will stretch 125 miles...

The Fred Meijer Clinton-Ionia-Shiawassee (CIS) Rail Trail stretches 41 miles between the mid-Michigan towns of Ionia and Owosso, offering a mix of...

The Grand River Edges Trail runs in loops on the east and west banks of the Grand River near downtown Grand Rapids. At the south end, the trail...

The Fred Meijer Pioneer Trail is the last trail of a dozen trails in western Michigan to be named after philanthropist and Rail-Trail Champion Fred...

The Butterworth Trail connects several neighborhoods in Grand Rapids on both sides of the Grand River. The majority of the paved trail loops through a...

The Plaster Creek Trail provides a non-motorized way to access Grand Rapids neighborhoods via a pleasant, tree-lined route. The path meanders along a...

When complete, the Paul Henry - Thornapple Trail will be a 42-mile, multi-use recreation trail, extending from Grand Rapids to Vermontville; it...