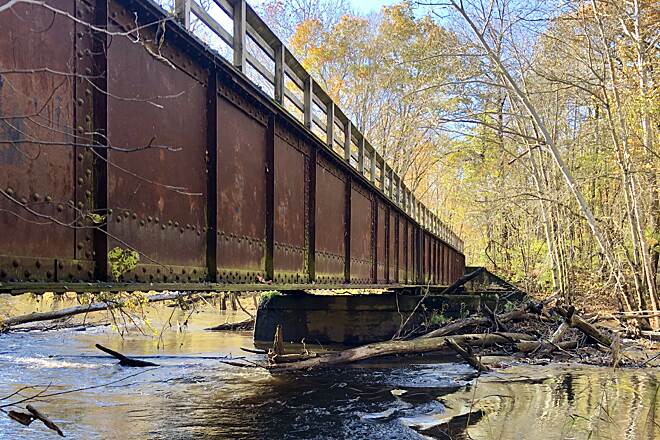 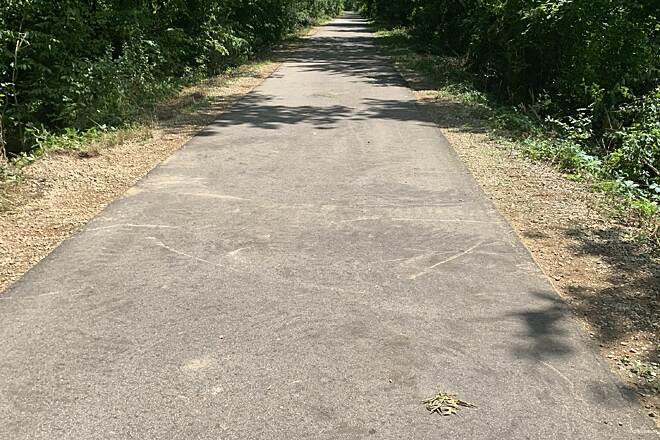 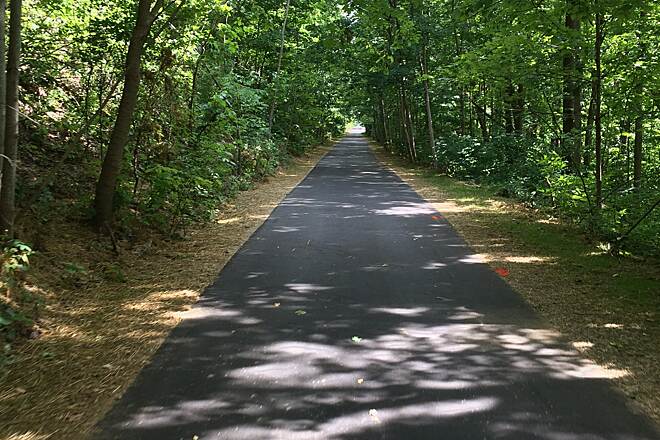 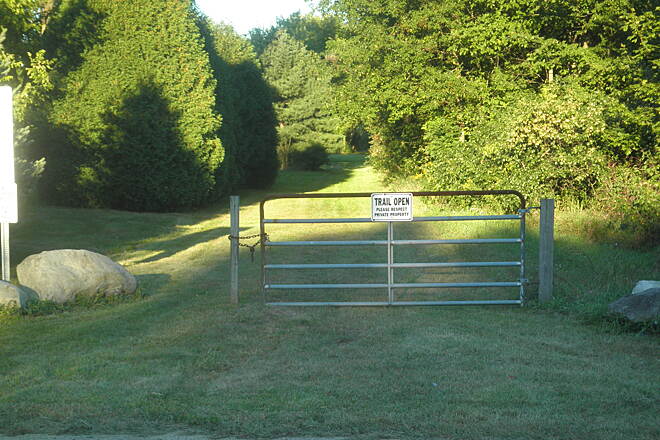 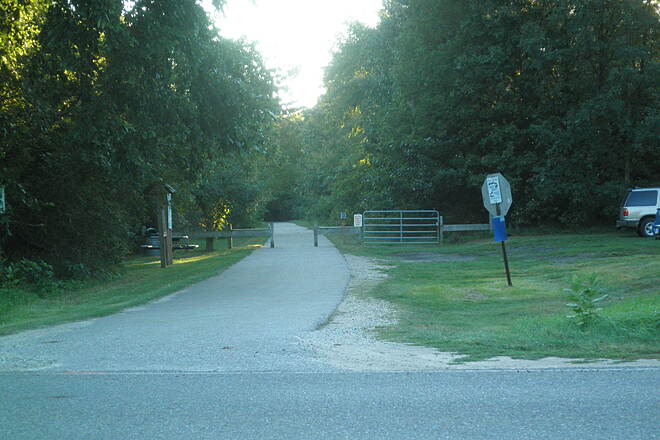 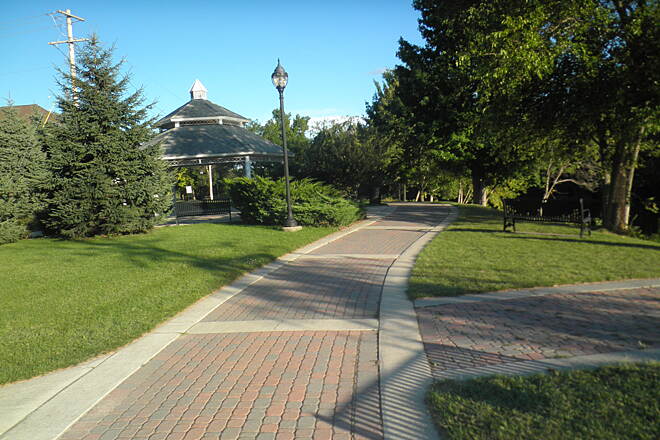 View Trail Map Send to App
When complete, the Paul Henry - Thornapple Trail will be a 42-mile, multi-use recreation trail, extending from Grand Rapids to Vermontville; it eventually may be extended to Jackson. The trail is being constructed on or near a former railroad corridor. Some sections have been completed, while others are either in development or proposal stage.

The trail passes through farmlands, woodlands and small towns, coursing along and over rivers and creeks. Indeed, some people call it the most beautiful rail trial in Michigan. Part of its beauty is its proximity to the Thornapple River.

Three and a half miles of the Paul Henry - Thornapple Trail is paved between Middleville and Irving. Kent County Parks hopes to have another mile paved by the end of summer 2011, which will complete the paving between Dutton and Caledonia.

The Thornapple Trail Association anticipates opening another trail section in 2012, linking Caledonia to Middleville, as well as paving a section through Hastings.

For the most up-to-date information on the progress of this trail, or to get involved with this trail's development, visit the Thornapple Trail Association.

Maps of the trail are available on the Trail Websites.

We visited GR for a bike vacation and the trail from Kentwood going south for at least the first 5 miles was the very worst bike trail we’ve ever experienced anywhere! Terribly maintained, poorly signed, narrow and bumpy! Plus a long stint right next to a very loud interstate! I mean right next to it!! We found the trail so unenjoyable that we rerouted ourselves back to our car off the trail after only 5 miles! With so many other great bike trails in the area, don’t waste your time on this one!!!Truly brutal!!

I almost didn't want to ride this trail since that one guy was so extremely upset in his review (eye roll emoji). At the time I didn't realize his review was from 2014, I think the trail has been updated since then.

We rode on 5/16/20. Started in Kentwood and ended Southeast of Middleville (about 36 miles roundtrip)

The trail signs were pretty good, a few spots took a glance at the trail link map but it was easy to follow. It was pretty solid pavement/sidewalk all the way past Caledonia. Good scenery and overall a good ride.

The trail turns to gravel, grass and we had some wet spots for about a half mile or so from 100th St SE to Stimson Rd. After that you ride down the dirt road until you reach Crane Rd where the trail picks back up. From there we continued through middleville and the trail was pleasant as far as we headed in that direction.

This trail was pretty awesome and I really enjoyed it. A few spots to ride off trail but for the most part the pavement was great. Not sure how the trail is towards Hastings but I plan to check it out sometime.

Biked the trail from Middleville south on a cool clear weekday in late September. Trail was not crowded but a bit bumpy in a few spots. We also biked the new portion a mile long and it was beautiful. Nice restaurants in town near the trai.

We road from Middleville to Hastings & back. Trail was paved with beautiful scenery for a few miles south of Middleville. Then turned into grass ( abandonned railway bed), then dead ended

Rode the new section of trail north of Middleville. Nicely done. The trail twists and turns along the rice for approximately a mile to Crane Road. Multiple bridges with nicely landscaped retaining walls. Can't wait for it to connect to Caledonia.

Out of towner perspective

Hi, rode the trail on 5/29/16 starting at downtown Caladonia. My sister lives in the area and we rode the trail for about 6 miles out and back.
I live on the east side of the state and look forward to more rides in the Middleville / GR area.
The Paul Henry Trail I rode was nice. Starting at Caladonia the surface was very good for the length we rode except by the High School which I will comment on. About 8/10's of a mile in you come to the new Middle School being built at the High School. The new Middle School under construction seems to sit right on top of the bike trail. We walked part of the construction area and rode a little bit of it to the driveway of the High School and then across from the H.S. got back on the trail. Not the end of the world although where the school is bieing built I wondered where the trail was going to go around it.
Some signs explaining what was ahead,when the trail would be back opened,or if the trail was closed might have helped. Besides that the ride was very nice & indicating about 213 feet of elevation change over the 6 miles.
From Caladonia to the construction area was shady and tree covered, for the next 5 or 6 miles the trail is pretty much in the sun.
No rest stops / benches, no water fill stations were noted on the stretch I rode.
Again, the trail was smooth and nice riding.

The trail to Caledonia is torn up for 1/2 mile by the high school - what a mess!

Worst trail I have ever ridden!

My wife and I are quite active, athletically, and have become quite avid cyclists over the past few years. We have biked several (mostly urban) locales in these years, including Huntsville, Atlanta, Fort Wayne, Columbus, Jacksonville, Grand Rapids, and others. We’ve seen great and we’ve seen good, but I can’t ever recall being disappointed to the level that we were in riding the Paul Henry Thornapple Trail today. For the record, we rode in the section that is in the Kentwood area; I have also ridden the section down by Middleville and found it to be very enjoyable.

In any ride, there are usually about five main criteria that we find to be quite important. Those are:


Of these, the trail in question would rank a failing score on all five. I am astounded by the poor quality of this trail and to be honest, I'm not sure why it is called a "bike trail" at all.

To begin with, the signage is absolutely abysmal. No other words to describe it. I can’t even count how many times we had to stop, get out our phone, check the map to see where we were and how to get back onto the trail! Additionally, one time we went down an unmarked split in the path and found ourselves on a boardwalk that had NO railing, just a 2X4 at the edge. One slight missed turn and we would have been in the water. Incredibly dangerous.

On this same portion of the trail, a large tree had been felled and was left blocking the path, right at a T-intersection, and there was no sign or any warning, whatsoever. This was ridiculous, to say the least, and caused a low-speed accident, which would have been much worse, if not for a helmet being worn.

Continuing on, we decided to take the two-mile path that used to be the railroad line which runs to the northwest, towards Grand Rapids. As we rode down this path, at a very relaxed cruising speed of about 11-12 mph, a very grumpy old man started hollering that the speed limit was 5 mph! Seeing no signs, but wanting to be respectful of our environment, we reduced our speed, but I’m not sure if anyone can actually travel 5 mph on a bike!

Either way, we continued on (slowly), and upon reaching the 52nd Street trailhead, once again found ourselves with zero guidance on how to continue on this path. After a painful search, we finally discovered the hidden entrance and continued on. Before we did, we looked for the "sign"; it was the "General Trail Rules" sign, with about 7 suggestions. Number four said, "Keep a safe speed (5 mph or less)". Seriously. This means, all runners, blade-skaters, bicyclists, etc., are NOT welcome here.

If all of this wasn’t bad enough, the quality of the pavement was some of the worst that we’ve ever experienced, and the overgrown brush had encroached onto the path by some distance.

Overall, if I had to give this trail a rating on a scale of 1 to 10, it would be a zero. As in, don’t ever ride this trail, as it is dangerous and unenjoyable.

We have had so many great experiences, in so many cities, that this was clearly unexpected, especially when you consider the quality of trails that DO exist in the Greater GR area. I am not sure who is the responsible government agency on this trail, but seriously, if it is going to continue in this state, it does the GR biking community a great disservice to be included on a list with the other quality trails.

Began the ride at Kalamazoo and 44th. Found the asphalt surface in early stages of deterioration but still comfortable to ride. Encountered more walkers than bicyclists, but the trail was not crowded. The arboreal tunnel on much of this northernmost section kept me cool and comfortable. It would be a great ride with the fall colors.

My ride on this trail ended where it intersects with the M-6 trail. Better signage would have kept me on the Paul Henry-Thornapple.

We recently traveled a portion of this trail near Middleville Mi. It traverses alongside the Thornapple River and its backwaters. It is a paved section that is beautiful and well maintained. It appears to be used often by bikers, hikers and the local population.