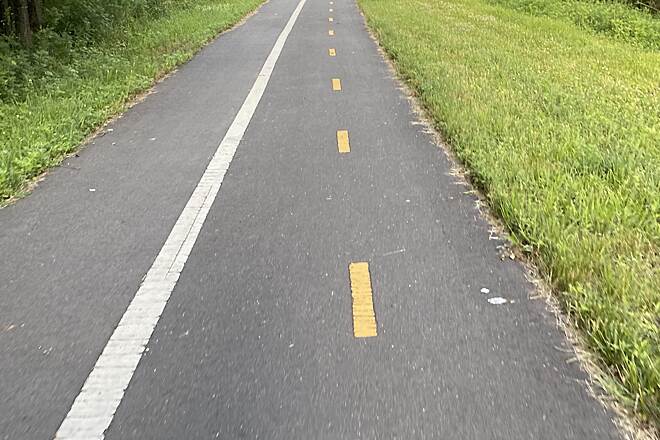 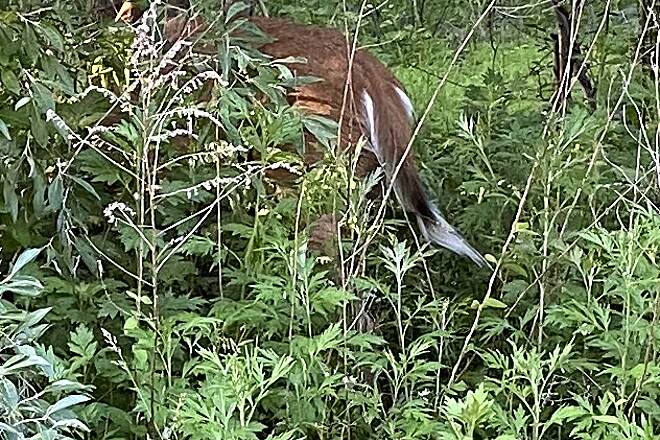 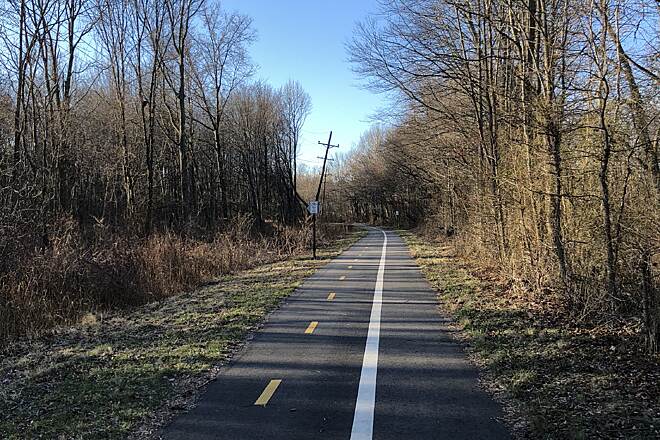 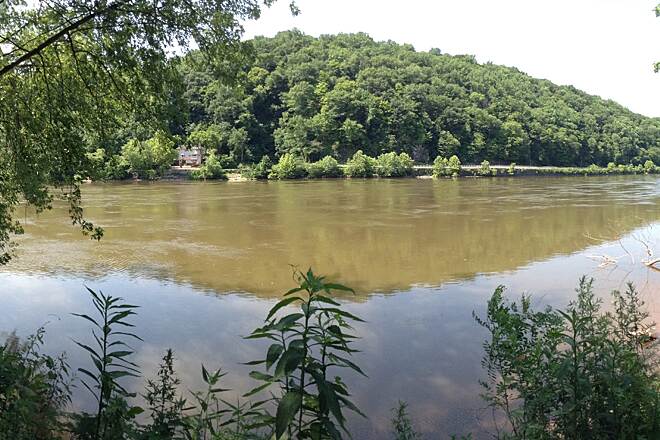 Currently, two short disconnected sections of the trail are complete in these communities of South Brunswick:

It’s a mile through NJ dumplands.

The good thing about this trail is that it's not crowded. But there's a reason it's not crowded: It just isn't anything that special about it. It's very short, and even in that short stretch, you've got to cross 2 roads with cars coming pretty fast. The unpaved stretch is a nice jaunt through the woods, but just 1 mile, and then you have to turn around. The paved part is about 2 miles, but not very scenic.

When I first rode this trail in Spring 2019 I took the paved section from Monmouth Junction to Stouts Lane. Nice trail but so short at 1.35 miles. I couldn’t go any further across Stouts Lane as there was some sci-fi-looking installation blocking the right of way. Damn, I thought! Now I see that it was a toxic waste cleanup. That kept me from riding there for a year. This past March I decided to give it another shot since it passes through nice woods, it’s got a flat paved surface and it’s less than a half hour from home. Much to my delight I found that the section across Stouts Lane is now open! On my first ride I missed this fact. On the second visit I pushed on across Stouts and saw that the sci-fi installation had been removed and it’s possible to ride through those beautiful woods. There’s hardly ever anyone on that section, too, while the paved one can get quite populated at times. I still love it, though. So, now I can get a full 5-mile round trip from the Monmouth Junction lot to Route 1 and back. Still a bit short for me, but it’s great on weekday afternoons for a relatively short out and back ride. If I repeat either section I can push that to 7 miles and it only adds about 15 minutes...good for getting some outdoor time and then back to my desk. We just now need that darn bridge over Route 1! That would effectively connect Monmouth Junction with the D&R Canal to either New Brunswick or Trenton, and up the Delaware River to Frenchtown. There’s already such a structure several miles north on the Middlesex Greenway Rail-trail in Woodbridge, which jumps the tail over Route 1. South Brunswick needs to get this project done as it would be a great benefit to all trail users, especially their residents.

Oh boy fellow trail lovers now the trail is closed for super secret toxic waste cleanup! On joy! Walking mostly westerly on paved trail (opposite side from freedom trail parking by current train tracks) to past stouts lane where paved ended and dirt began: There is a new trail addition it stops most but not all foot travellers. Bicycle or vehicle is impossible now. There are no signs or such as anyone in the United States would suspect the government would require as to what in the world is now there. But based on the trailer I saw with a toxic waste cleanup company name on it (Terra-Therm) the way they now have the area sealed off and machinery to drill down and receive samples its obviously related to possible or definite toxic waste. Don't you think in order to shut down public property in fact this trail they would have to post what they're doing ? Nope not in this state. Don't bother asking the workers any questions it's all hush-hush don't tell the locals about this toxic waste. With this secret toxic waste cover up how can you rate it more than one star at the moment?

Nice Trail-Still Needs To Be Tied Together