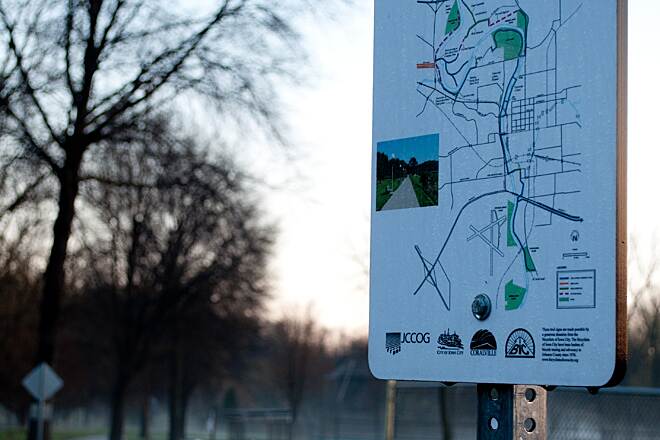 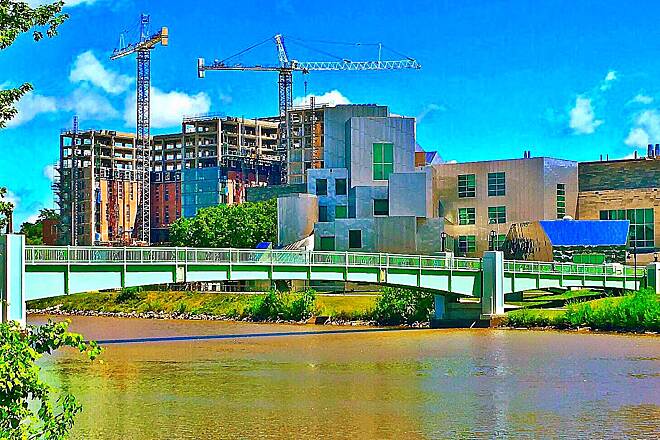 Meandering along the Iowa River through Iowa City and North Liberty, this trail offers residents and visitors alike with an invaluable off-road link between the two cities. Numerous offshoots of the trail in Iowa City provide connections to various destinations and make getting around the city an easier, more pleasant experience. The Iowa River Corridor Trail has several distinct segments and is sometimes more of a sidepath than a traditional multi-use trail, especially the northern end of the trail, but there's no better way to experience the numerous city parks and gorgeous river views on its route.

Starting in the south, the trail begins in the scenic, wooded Terry Trueblood Recreation Area, and heads north along the shady river shoreline through Napoleon Park, which offers parking and restrooms. The trail continues north, hugging the river, and crosses Ralston Creek, where it turns to follow the creek for a short jaunt before crossing over the river at Benton Street. The trail continues without interruption for several miles along the western bank, heading through the sprawling and beautiful campus of the University of Iowa. Trail users may wish to cross back over the river via a pedestrian bridge and head south for a quick detour to check out the city's historic downtown district and the university's main library.

The trail heads north into City Park, a large and beautiful space that hosts a variety of recreational activities. Crossing Park Road, the trail continues next to Dubuque Street, gradually moving away from the river as it turns into a sidepath on Foster Road and heads west. Users can either continue on Foster Road through the Elks Lodge grounds and golf course to reach Crandic Park at the bend in the river or can turn onto Mackinaw Drive and head through a residential subdivision to pick up the trail along the river again and head into Waterworks Prairie Park.

At this point, the trail continues north on Dubuque Street, tracing the east edge of Waterworks Park and heading all the way into the suburb of North Liberty. This stretch may not be as scenic as the trail's beginnings, but it does provide a useful commuting route for residents. From there, the trail continues along Mehaffey Bridge Road and across the river to the east bank. After crossing the river, the trail comes to an end by the parking lot for the Sugar Bottom Campground (2192 Mehaffey Bridge Rd NE, Solon).

Along the route, the Iowa River Corridor Trail meets several other trails that offer connections and new adventures. Near the trail's northern end, several streets offer easy access to the North Ridge Trail and Ranshaw Way Trail. Just north of Waterworks Prairie Park (2875 N Dubuque St), the trail connects with the Oakdale Boulevard Trail which in turn links to several shorter trails. Further south, trail connects with the Clear Creek Trail and the Lower Finkbine Trail along Highway 6. Refer to the TrailLink map and turn on Nearby Trails in the map legend, to view the exact locations of the connections and to plan your route.

Well Worth Your Time

I’ve ridden this trail from the Mehaffey Bridge South to the I-80 overpass. It’s a nice wide paved trail in great condition. It goes through North Liberty and then south into Iowa City. There are some pretty big hills in this section, but nothing unmanageable. There’s lots to look at along the way, and some opportunities for side trips, like through Waterworks Prairie Park which was very nice! At the far south end the trail loops around Terry Trueblood Recreation Area, which is a great place to spend some time. They have kayaking and other water sports. You could easily spend half a day enjoying this trail.