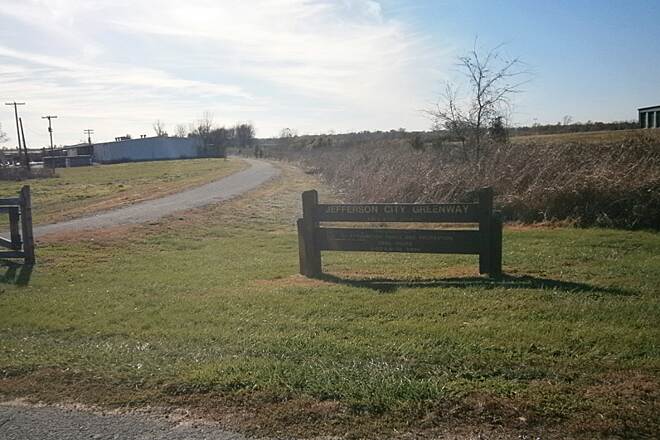 The Katy Trail Spur, although short, provides a vital connection between the 238-mile Katy Trail State Park and the North Jefferson Recreation Area on the north bank of the Missouri River.

The new park emerged from the ruins of Cedar City, an unincorporated community destroyed by the Great Flood of 1993. Where houses and businesses once stood, a picnic pavilion, community garden, playground, dog park and athletic fields now serve the residents of Jefferson City and Callaway County.

Extending southwest from the Katy Trail, the spur passes under US 63 before emerging into open fields. A stunning view of the Missouri State Capitol in the distance presents itself shortly thereafter.

It is also possible to access the Jefferson City waterfront on the south bank of the Missouri River by using a portion of the Katy Trail Spur. From the Katy Trail, continue on the spur to the US 63 overpass, where you should leave the trail for lightly-traveled Oilwell Road. When you reach 4th Street, continue south on Cottonwood/Walnut Street. This portion of the route has shared lane markings for cyclists.

At the Missouri River waterfront, continue through the parking lot and under US 54/63 to the pedestrian and bicycle attachment to the highway river crossing. You will ultimately emerge at the intersection of Clay Street and W. Main Street in Jefferson City, just a handful of blocks from the Missouri State Capitol.

Parking for the Katy Trail Spur is available in the north at the Katy Trail State Park trailhead off Katy Road (west of US 54). Alternatively, park at the North Jefferson Recreation Area between 4th Street and Cedar City Drive.

I personally have had a rough go of things these past couple of months, so I’ve taken to walking as a moving meditation practice, especially in the early am or late evening. I’m fairly new to this area. This spur is a wonderful trail to walk, peaceful enough, and not so far out that I feel like I’m trekking cross country. Signage could be a smidge better but other than that, no complaints here!