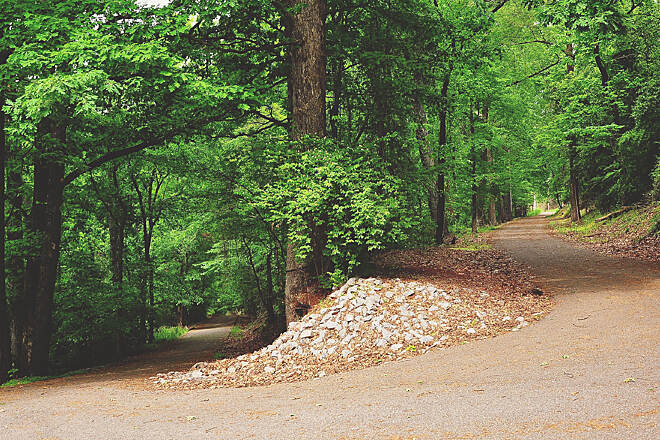 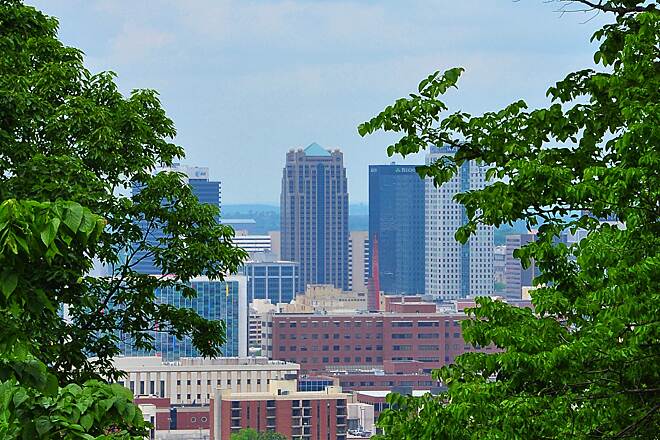 View Trail Map Send to App
Birmingham's mile-long Vulcan Trail scales the ridge of 1,025-foot Red Mountain. In summer, the tree-lined trail offers cool respite from the heat, while bare winter trees yield city views. Best of all, it takes little effort to enjoy this breathtaking scenery; like most rail-trails, the route is flat.
The paved surface is especially inviting for walkers, joggers and those taking pets for a stroll.

From the parking area, the path traces the route of the former L&N Birmingham Mineral Railroad. (With roots as a steel town, Birmingham is one of the few geologic zones where one can find all three mineral components—iron ore, coal, and limestone—needed to make steel.)
The trail offers a bird's-eye view of many notable historic structures and areas, including the Arlington Antebellum Home and the Birmingham Civil Rights District, a six-block tribute to the civil rights movement that contains the Alabama Jazz Hall of Fame and the Sixteenth Street Baptist Church, site of an infamous 1963 Ku Klux Klan bombing that killed four young black girls.

The route runs below 10-acre Vulcan Park, home to the world's largest cast-iron statue and trail/park namesake. An Italian sculptor crafted the 56-foot statue of Vulcan, the Roman god of fire, for the 1904 World's Fair in St. Louis to showcase Birmingham's burgeoning industrial might. The park also houses the Vulcan Center, which traces the city's industrial past and offers rotating exhibits. While the park remains inaccessible from the trail, plans call for that to change.

Directions: From I-65, take Exit 256-A/Oxmoor Road and drive east about a mile toward Homewood; Oxmoor becomes Palisades Boulevard. Turn right on Valley Avenue, drive 1.6 miles, then turn left on Richard Arrington Jr. Boulevard. The trailhead is 0.2 mile down on the left.

A second mile in the woods

Although there is only one mile of paved trail, you can continue on a well traveled wooded path for another mile. This path terminates behind a business (formerly the FOP lodge) on Green Springs Highway. A neighborhood street (Red Mountain Terrace S.) also dead ends there. You can park at the end of that street and walk first on the wooded path and then continue on to the paved trail.

In April 2013 a few days ago, My friend sent me this about Vulcan Pk Trail. "During my lunch break during the last couple of weeks, I have been birding the Vulcan trail which lies on the upper north slope of Red Mountain. I have found an abundance of palm warblers as well as lots of indigo buntings, some hooded warblers, red eyed vireos, rose breasted grosbeaks, scarlet tangers and a good variety of other neotropical species represented by single individuls including cerulean warbler, ovenbird (two days in a row), Tennessee warbler and bay brested warbler. Wood thrushes have been singing in the area as well."
Today, May 1st 2013 I saw some great birds as well!!!!
Indigo Buntings, Great Crested Flycatchers, gorgeous male Baltimore Orioles,White-eyed Vireos,Eastern Towhees,Gray Cat bird,Eastern Phoebe,Yellow-rumped Warbler,Turkey Vultures, Carolina Wren,Scarlet Tanagers & the usual jays,cardinals, sparrow,Rough-winged Swallows & Crows.

The trail is adjacent to Vulcan Park but there is no path linking the park to the trail. The path is really more a limited service road for telephone and cable access. The trail is easy walking on the flat, smooth asphalt with no real views unless you like looking at Kudzu going up the hill or houses and apartments down the hill.

This is my first visit to this trail. (11/1/11) After reading the two prior reviews, I wasn't sure what to expect. I found the trailhead by using the GPS on my iPhone. I expected to see a sign for the trail prior to tuning into the small parking area. There was none. The turn in to the parking lot is at the blinking light at the top of the hill. The only sign I saw was at the actual start of the trail. My first impression of the parking lot was that it is used by the locals as a drinking spot. The pavement on the trail is in good condition. My impression was that of walking down a neighborhood street. There was actually curbing in some spots. The trail is also used to service the numerous utility poles on the mountain side. I was surprised to see a vehicle parked at the end of the trail. There is a road that comes up the mountain, I guess for utility trucks to acess the poles there. Over all this was a nice 1 mile trail

I was out there today (17Jul2010) and they have built retaining walls and repaired the landslide areas. They did a general brush cleanup also, and the trail is looking pretty good.

This would be a beautiful trail with a great view if... parts of the pavement on the trail had not collapsed leaving only about a 1 1/2 feet of the trail against the side of the mountain and large gaping holes on the downhill side. You can still walk/ride if you are very carefull. Large iron ore colored rocks, great view, tree shaded path but be careful. Concrete barricade in the trail before the collapsed areas so you will be warned. Would be nice is the trail could be repaired - not a good advertisement for visitors to Vulcan.