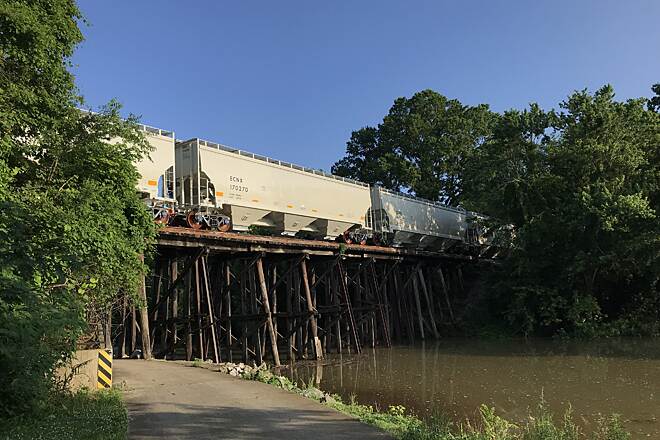 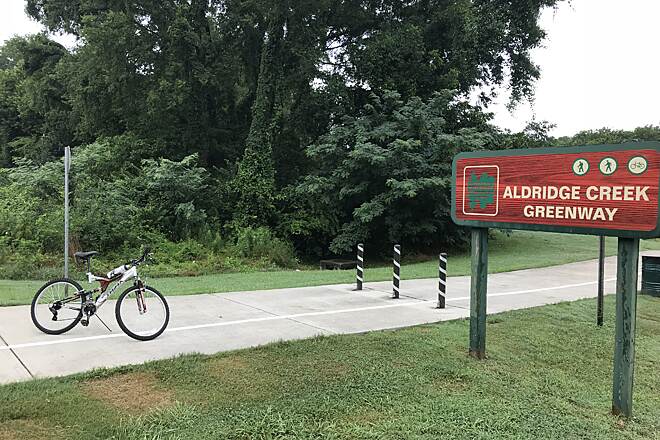 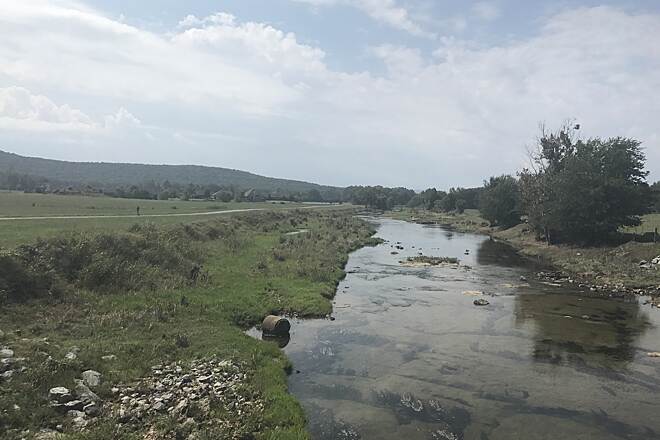 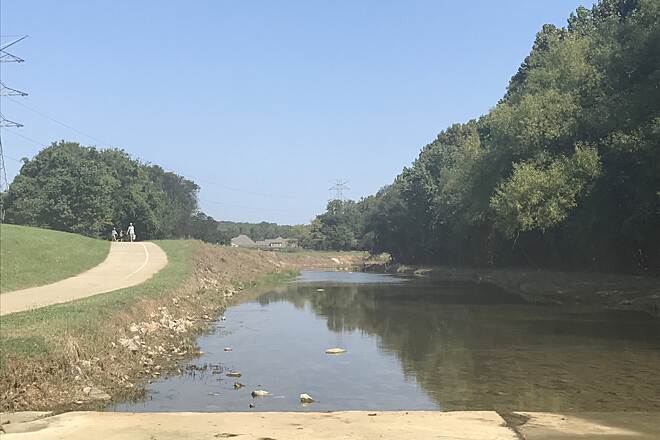 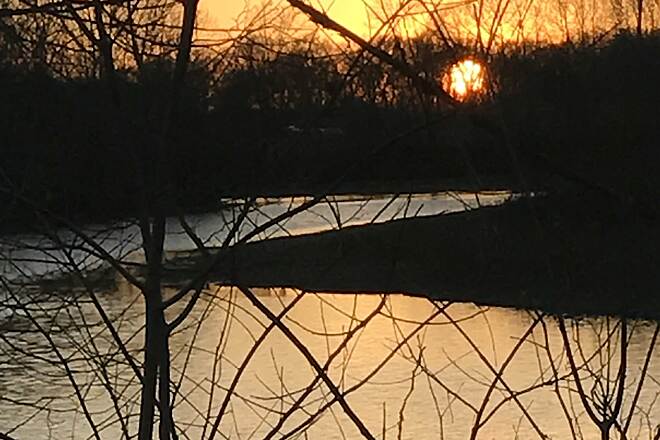 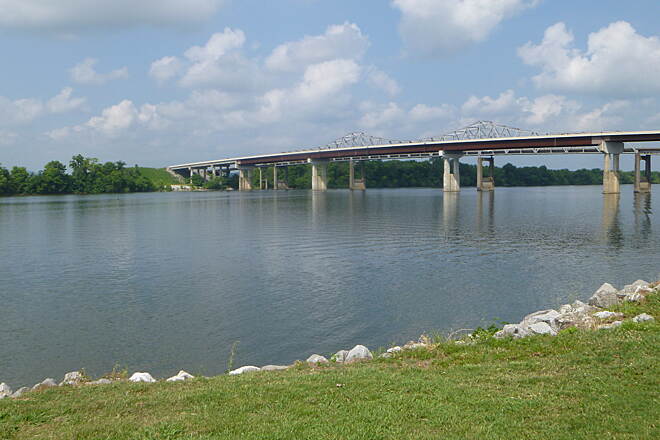 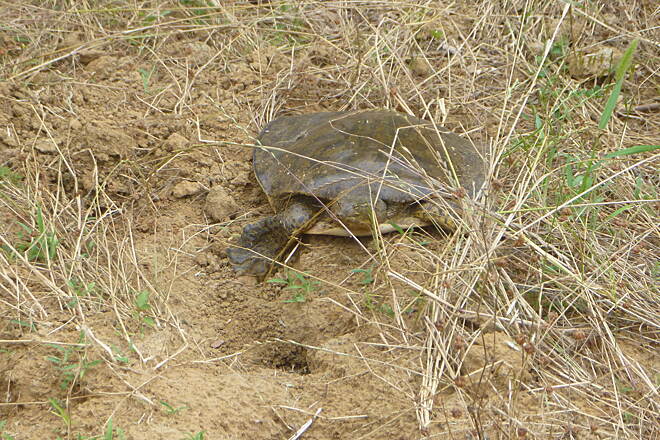 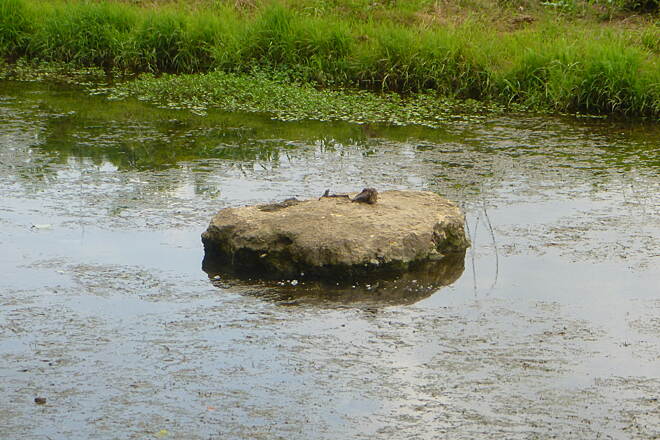 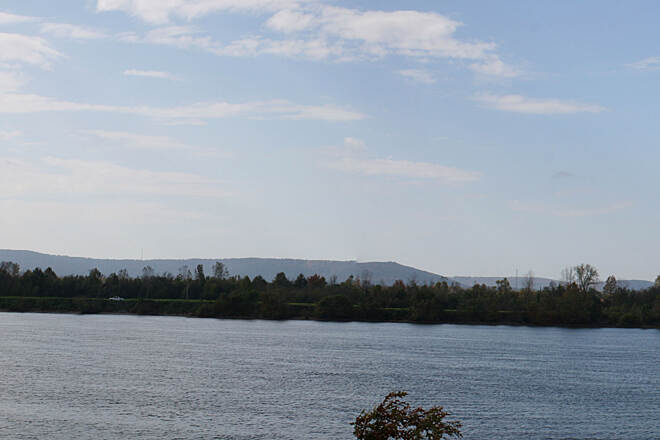 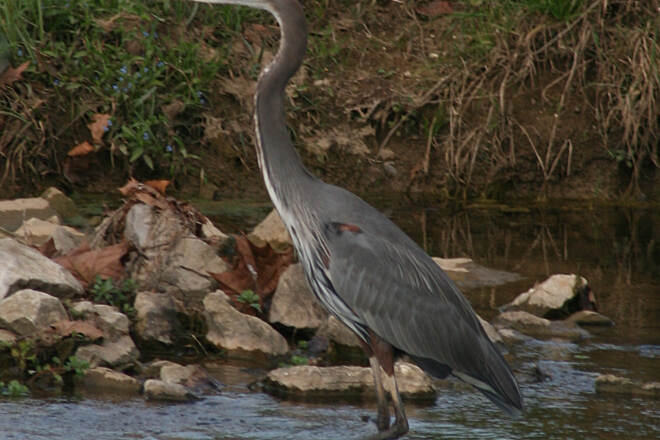 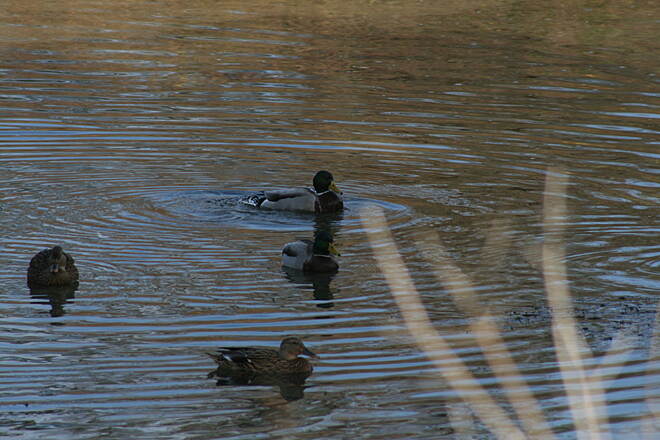 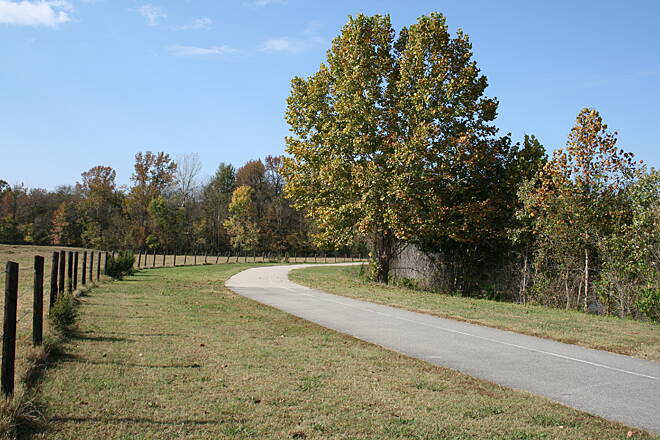 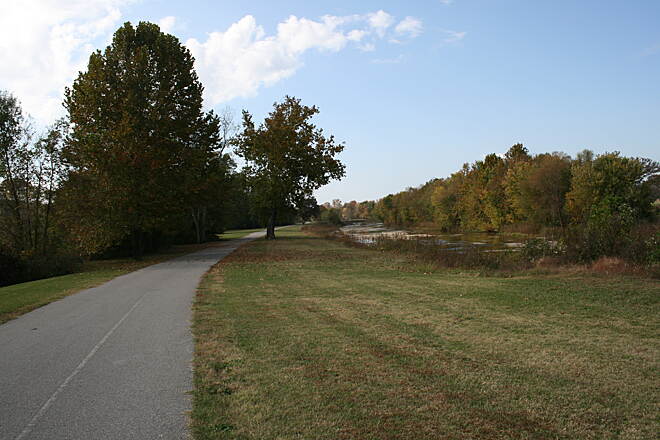 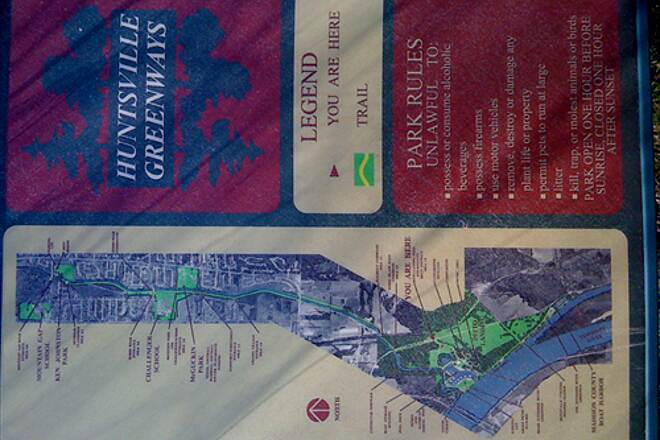 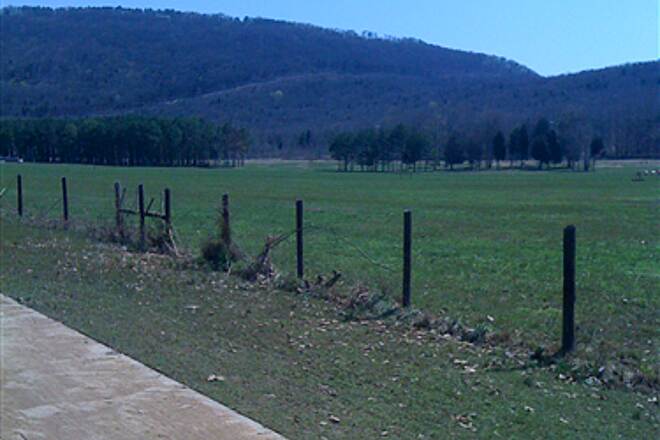 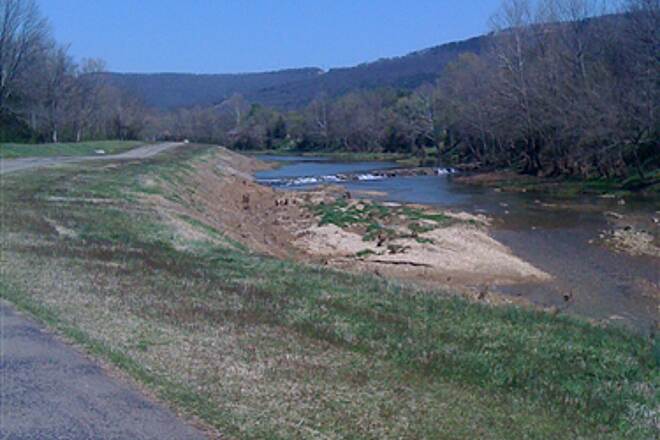 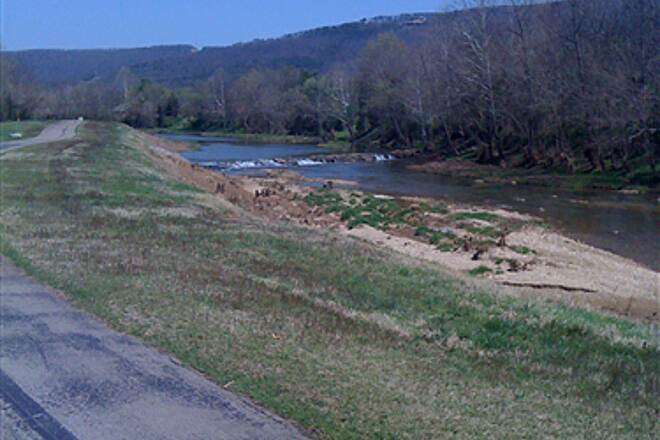 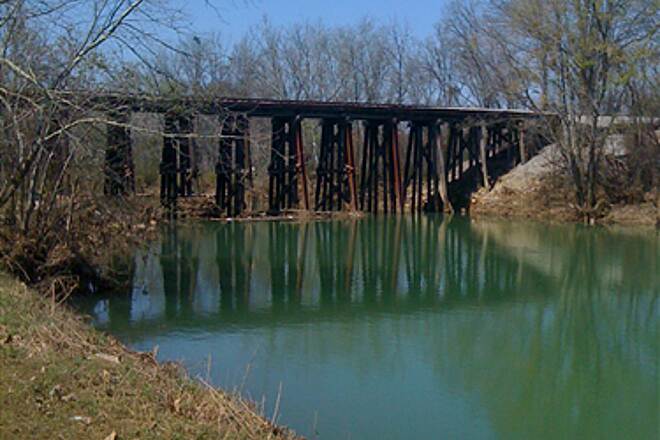 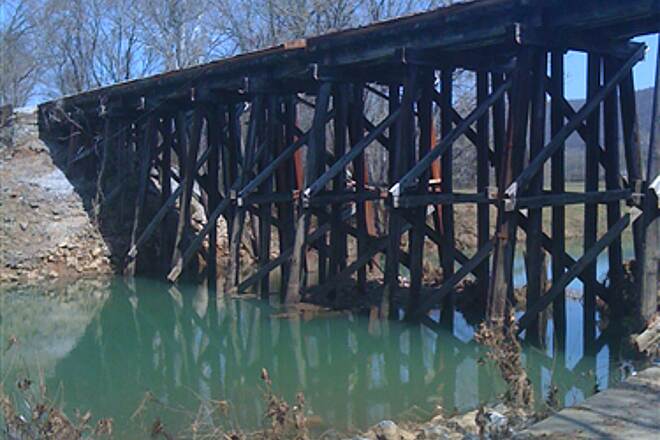 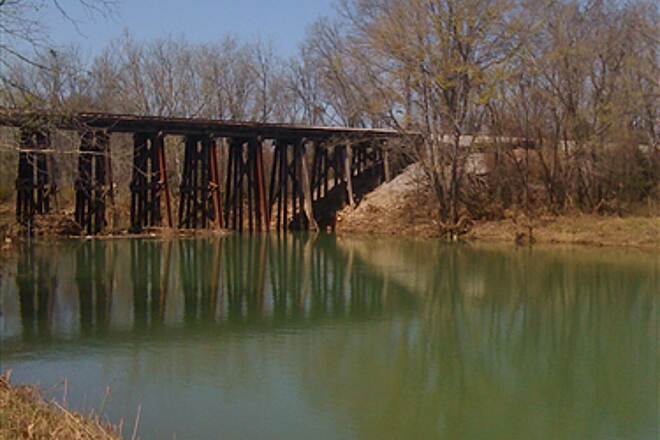 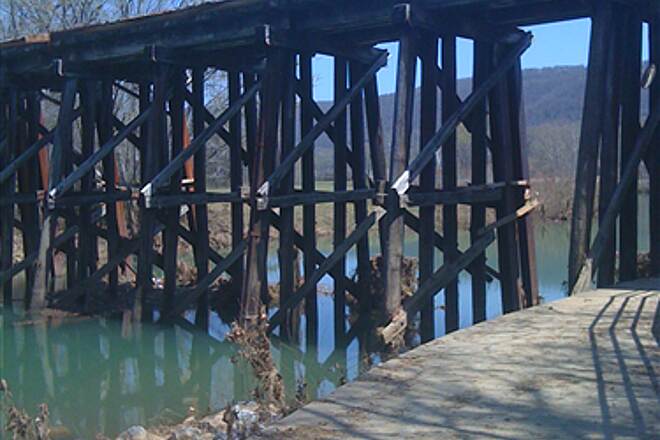 This paved greenway trail is well maintained and follows Aldridge Creek, running parallel to Bailey Cove Road, from Mountain Gap Road to Green Cove Road. There are proposals to extend the greenway north of Mountain Gap Road. Rabbits, turtles and various other wildlife can be seen on the trail, and it's popular for birdwatchers. The trail passes under all main roads, making it safe at crossings.

From Huntsville, turn onto Hobbs Island Road off Hwy 231(Memorial Parkway, South Huntsville); it's the last road before the Tennessee River Bridge. Take the first right onto Ditto Landing Road SE. You can park at any of the public parking in Ditto Landing, but be aware that it closes at sundown. Parking is also available at Ken Johnston Park in Huntsville
.

....start at Ditto Landing early Saturday morning and ride to St. Thomas Episcopal Church for their Saturday morning Farmer’s Market. Great scenery along the way. Wildflowers and small wildlife - honeysuckle along the creek banks and turtles sunning on the rocks.

Not as much shade as other Greenways , still a great experience! Best in Early spring and Fall. I don't mind hot weather, but some don't. Enjoy!

A jewel among Huntsville greenways, Aldridge is level, clean, safe, and relatively entertaining. You’ll want selfies at the bridges and train trestle. In all a good 10 mile round trip along the Creek.

Just rode this up and down the other day. Very clean and scenic. Got to see a prairie dog and almost ran over a black snake that was coming from the creek, this was due to me not watching the trail while wiping my eye. close call either way. Looking forward to hitting this trail again someday

I'm not an experienced biker by any means, but this was nice! well kept. I also checked out Ditto Landing. You can get a beautiful view of the river there

My wife and I had a chance to go and ride this greenway. I use a handcycle and this geenway has no steep hills to climb, or busy roads to have to cross. We parked at Ditto Landing's Winstead Pavilion. We rode north to the end at Bailey Cove Rd, turned around and rode back. We wanted to ride the Tennessee River Greenway but we were running short on time. We will defiantly be back. A big "THANK YOU" to the City of Huntsville, and Madison County for making these Greenways possible.

The trail has been extended. The northern end is Bailey Cove Road and the southern end is Ditto Landing. The total length is about 5.5 miles.

This was a nice trail. I just bought a new pair of skates, and have been looking for somewhere close to home to use them. The path was scattered with people walking, running or biking, but not to the point where it was even slightly crowded.
The only con I found, was that it was definitely bumpy, and I don't know if you have ever skated on a bumpy road, but it isn't fun. Bumpy roads can definitelly make for some tender tootsies.

Aldridge Creek is a small creek running south from the Jones Valley area of Huntsville to the Tennessee River. The Aldridge Creek Greenway is a walking/biking path that follows this stream from Mountain Gap Road to the Ditto Landing Marina. It is an asphalt/concrete path that is very flat throughout.

On Mountain Gap Road is Ken Johnston Park (right by Publix) which has parking, restrooms and a small playground. Currently, the north end of the trail is just across the creek from the park. About a mile south the greenway passes under Hobbs Road. A mile further south, it passes under Green Cove Road, loops back around, goes over the bridge and resumes its southward path down the east bank of the creek. After another mile, the greenway narrows as it rounds a curve and goes under the railroad bridge and Hobbs Island Road. Slow down and be careful as this is a somewhat blind curve. From here the greenway turns east, ending at the entrance to Huntsville's Ditto Landing Marina. NOTE: This last segment is somewhat suseptible to flooding after heavy rains. Although Aldridge Creek has a long history of flooding, the City of Huntsville has done a lot of work to alleviate that problem (part of that solution created this greenway). This southernmost section is the only part that I have seen flooding.

Although the Ditto Landing entrance (on Hobbs Island Rd.) is officially the end of the Aldridge Creek Greenway, if you turn south and go into the marina and go through the short loop road in the campground, you will find the western end of another trail, the Tennessee River Greenway which goes east along the river for almost another mile to the Madison County Marina. Adding this path to the Aldridge Creek greenway makes for a ride/walk of about 5 miles.

The Aldridge Creek Greenway is a well used path through the suburbs of south Huntsville. On a nice day, you will find walkers, bikers, skaters and all sorts of non-motorized transportation. It is partially shaded. The creek is beautiful as is Green Mountain off in the distance to the east. I have enjoyed biking this path many times and hope to continue to do so in the future.

I have got to say this is the very best trail i have road to date it is great.... trail taken very good care of you will see wildlife,fish if you stop to look in the creek its like steping back to the old days where you just feel safe it took me back as i was a child again... seen children fishing people walking their dogs and just over all a great ride will be doing it again very soon... thanks huntsville for such a great trail....