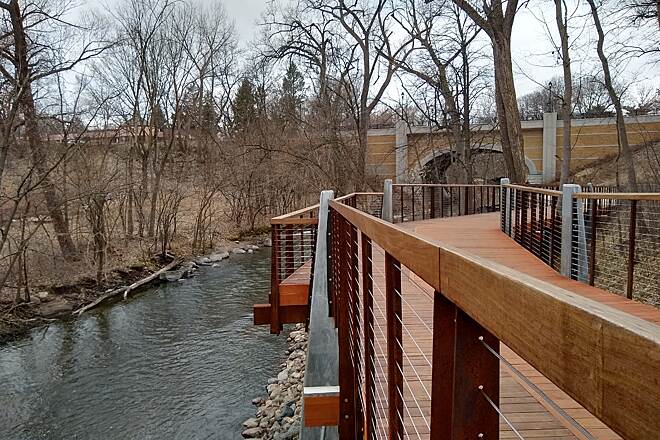 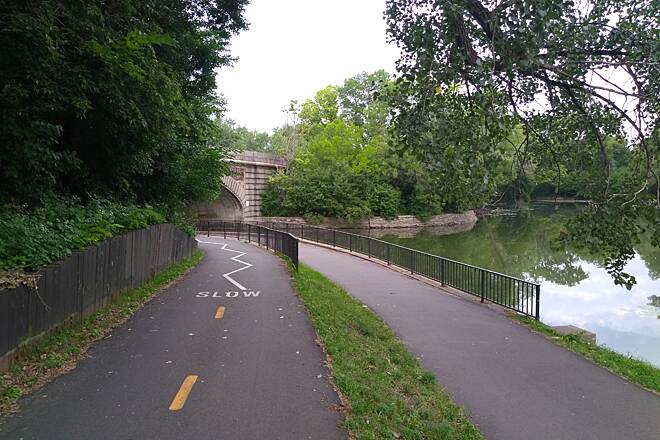 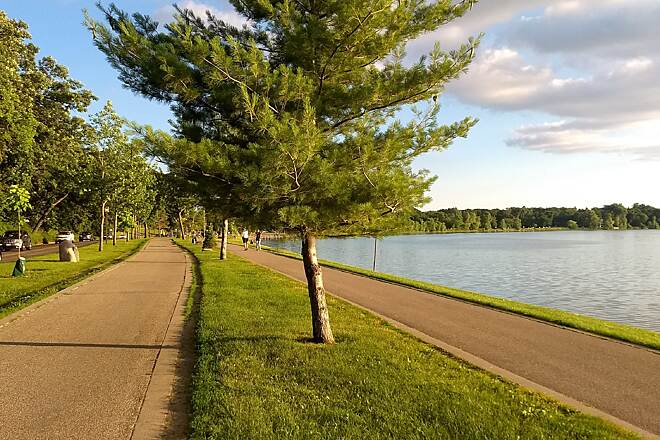 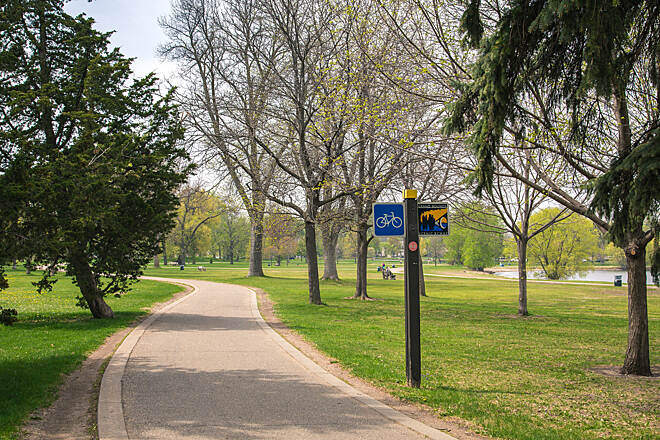 At the heart of Minneapolis’ world class trail system is the Grand Rounds Scenic Byway, a series of interconnected parks and parkways that loop around the city, acting as a key connector to the entire network of city parks and trails and more than 300 miles of regional trails. The 7 segments are connected by 50 miles of paved pedestrian trails and mostly separated bike paths, as well as 55 miles of driving parkways that give the Grand Rounds its status as a national scenic byway.

The Chain of Lakes trail loops around the four major lakes in this park system (Cedar Lake, Lake of the Isles, Lake Calhoun, and Lake Harriet) as well as some smaller ones. A wonderful place to while away a few hours walking, riding, swimming and boating in pristine lakeshore surroundings. Catch live music at the Lake Harriet Bandshell, or stop by the nearby bird sanctuary, rose and Peace gardens.

The Minnehaha Creek provides a quieter contrast to the bustle of the Chain of Lakes. South of Lake Harriet, the route follows the waterway, with deciduous trees screening the trail from the surrounding suburban neighborhoods. Minnehaha Falls and Longfellow House are noteworthy features as the creek winds its way to the Mississippi River.

The Mississippi River district links to downtown Minneapolis. Take a quick detour on the Winchell trail, an ancient Native American path, or stick to the trail for riverine greenery. The Downtown Riverfront district continues up the Mississippi. Here, explore the historic Milling District, take in the Minneapolis cityscape, and enjoy diverse restaurants, theaters and other cultural amenities.

The Northeast segment of the trail follows the St. Anthony Parkway, passing Deming Heights Park, which provides a good vantage point to appreciate the downtown skyline. Continuing across the 42nd Avenue Bridge brings you to the Victory Memorial Parkway in northwest Minneapolis, which commemorates the contributions of World War I servicemen from Hennepin County. Five-hundred and sixty-eight perfectly spaced trees line the boulevard as memorials to the fallen soldiers.

Theodore Wirth Parkway is the seventh segment in this extensive system. The Theodore Wirth Park stretches in the nearby suburb of Golden Valley and at 740 acres is the largest regional park in Minneapolis. The area is bountiful in both wildlife and plant life. Here trail users may connect to a number of local and regional trails.

You can access the trail at any number of points. For those driving to the Grand Rounds, if approaching from the north, take I-35W south into Minneapolis, exit on Stinson Boulevard and make a right on Stinson Boulevard heading north. Turn left onto St. Anthony Parkway. If you’re approaching from the south, take I-35W north into Minneapolis, exit at 46th Street and take a left on 46th Street to East Lake Harriet Parkway or right on East Lake Harriet Parkway heading north. From the west, take I-394 east into Minneapolis, exit at Penn Avenue and make a left on Penn Avenue to Glenwood Avenue. Turn left on Glenwood Avenue to Theodore Wirth Parkway. From downtown Minneapolis, take East Hennepin Avenue to West River Parkway.

The Minneapolis Park and Recreation Board offers numerous options for parking throughout the parks system. There are many free parking lots (including neighborhood parks), bays on parkways and on-street parking on nearby neighborhood streets. Pay parking areas are in regional park lots, on-street meters on parkways, contract lots, and event parking.

We rode from Bryn Mawr to M Falls and back. 28 miles. Stopped at Bread and Pickles for late lunch. It’s a really nice trail but the constant roots were so annoying. Ugh!

Grand Rounds Of Minneapolis is 31Miles as a True Loop! W/Missing Link!

The 51m is a bit misleading.
I started at the Franklin Bridge east bank road north on the East River Rd through the University Of Minnesota on a Family Friendly Trail (FFT). When go under the Washington Ave Bridge the trail is blocked and actually disappears so you riding Road Without Lane (RWOL) but stay on the East River Rd and you will see a sign for the Dinkytown Greenway (DTG), left down the hill then right onto DTG which is FFT. Ride the DTG and take the 1st right turn up to 5th St SE and right again where you ride on Sidewalk back to 15th Ave. SE where you turn right. 15th Ave SE is Road With Barrier (RWB) even though the barrier are vertical rubber tubes it is better then nothing. The barrier goes away at Rollins and the remainder of 15th Ave. SE is Road With Lane (RWL) and ends at Como Ave. Turn right onto Como two blocks on a RWL turning Left onto 18th Ave. SE here is becomes RWB. This street becomes Stinson Blvd at Hennepin Ave becoming a FFT and continues this way unto New Brighton Blvd. From here and until you reach St. Anthony Parkway you can choose to ride narrow pedestrian sidewalks or RWOL. The trail should run down the center median since that median is too narrow for any other use. Essentially this is what can be used as the missing link trail to complete the Grand Rounds.
Once on St. Anthony Pkwy you return to a FFT. When the trail reaches Central Ave which is a dangerous intersection, made worst because bikers must switch from the northside of the Pkwy to the southside. Otherwise the FFT runs until it reaches 42nd St Bridge where there is construction of the trail to go under the bridge which likely will be done by end of summer but for now you must cross the street.
The 42nd St Bridge however is very narrow, side by side will be difficult and opposing bike and any pedestrian traffic makes it harder. Once on the westside but still on the bridge there is a ramp into the park below. This route may be chosen instead of trying to cross traffic on Lyndale. At the bottom of the ramp turn left make an "S" to next trail turn right then straight over the creek bridge with an immediate left turn stay left under I94 and Lyndale pass the falls and then there is a 20ft dirt trail getting back on the main bike way, FFT this is the Webber Pkwy segment. Another switch from the northside of the pkwy to the southside occurs at Fremont & 45th and ends at Humboldt at the Webber Library.
At Humboldt The Victory Memorial Parkway begins and stays a FFT. Following this route I am mentioning at the main monument celebrating the Veterans Of WW1 is the 10 mile mark, This entire segment is very straight and flat.
The trail connects with the Theodore Wirth Pkwy. At this point next to North Memorial Hospital there is correctly bridge construction going on.
If you are riding the trail in the direction I am noting, when you reach N 29th Ave, keep right go downhill this is the correct way. If you take what appears to be the obvious route along the Parkway you find out your wrong, Beware! Otherwise the FFT is obviously has no trouble just stay on trail. the Wirth Pkwy is Rolling and twisting segment one of the best around. When you reach the bridge over I394 you covered 15m.
When you reach the Cedar Lake Rd and Cedar Parkway split you much cross the street at the light which a very tight, narrow and heavily traveled intersection. You follow the parkway along Cedar Lake FFT is mostly flat section of the trail which takes you to Dean Parkway an FFT to Lake Calhoun. The crossing at Lake St can be dangerous, Take care when crossing.
The Lake Calhoun Trail is one way clockwise so once you cross you must turn left. This area is also rather flat until you reach William Berry Trail is short and rolling then you connect with the Lake Harriett Trail which is also one way clockwise so again you go left. This segment is also rather flat. When you reach the Minnehaha Parkway you have trailed 20.5 miles.
Once on the Minnehaha Trail you are briefly on a RWL on W. Minnehaha Parkway back into a FFT and stays that way throughout the Minnehaha segment which may be the most fund section curvy with hills passing can be difficult in this stretch, Beware at the Cedar Ave crossing! The Bike trail leaves the Parkway and follows the creek instead again this is a fun curvy stretch. If you stay on the Pkwy it is RWOL or narrow pedestrian sidewalks. The Creek trail returns to the Pkwy just before it reaches Minnehaha Park. There the FFT follows Godfrey Parkway and then continues on as the East Mississippi Rd Trail. When you reach the Midtown Green trail and RR Bridge you are 30m continue on and cross the river on Franklin Bridge and you gone 31miles.

This stretch is difficult for commuting due to competition with auto traffic on narrow stretches of the Parkway. I use inline skates and can’t simply clog a lane for miles. It’s surprisingly stark how little maintenance attention to non-motorized traffic this stretch has received. After crossing the Hiawatha bridge the paths are more recent. Separation from traffic improves, but pedestrian paths are a tangled.

This is some serious bike infrastructure! Easy to commute throughout the city. Perfect for weekend exploration.

I have traveled to many major metropolitan cities throughout the United States and have biked their local trails. The Grand Rounds Scenic Byway trail network here in the Twin Cities is perhaps one of the nicest and most scenic you will ever ride on.

One of the great ones