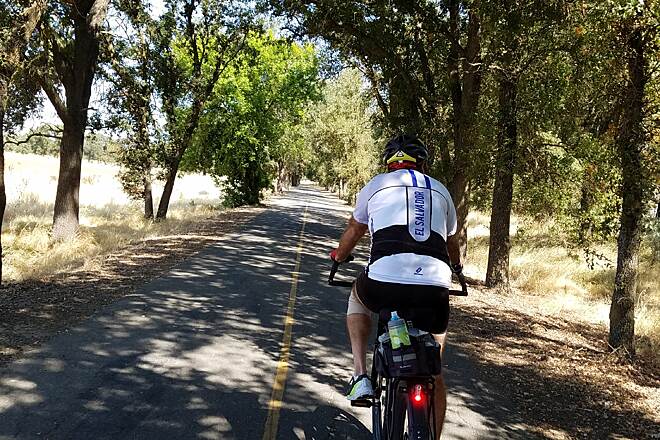 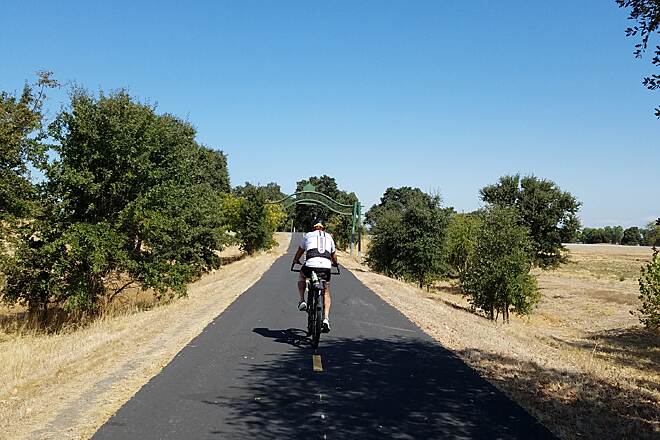 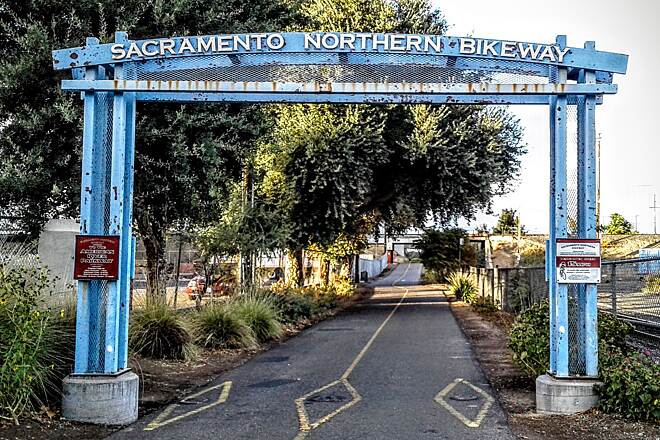 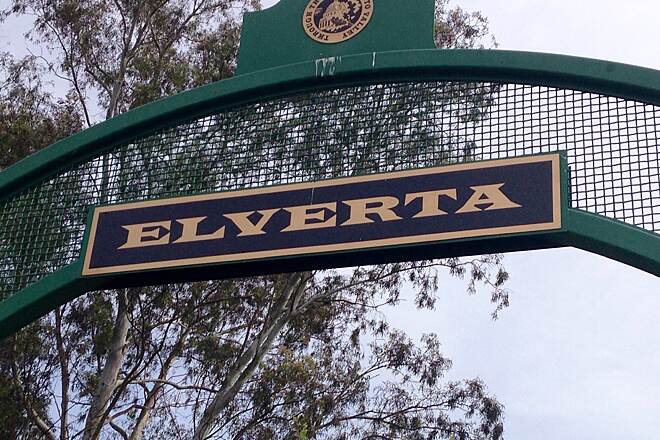 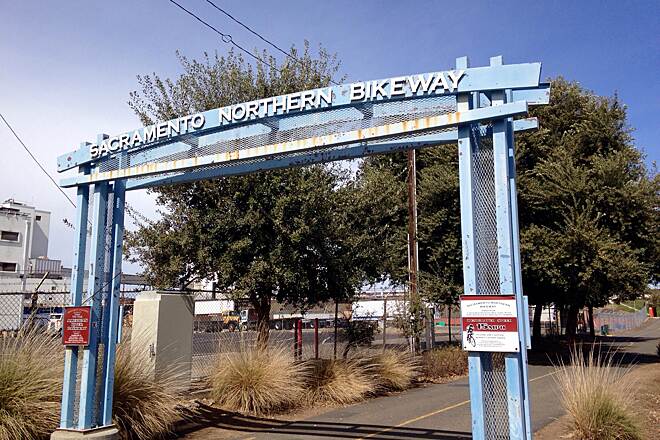 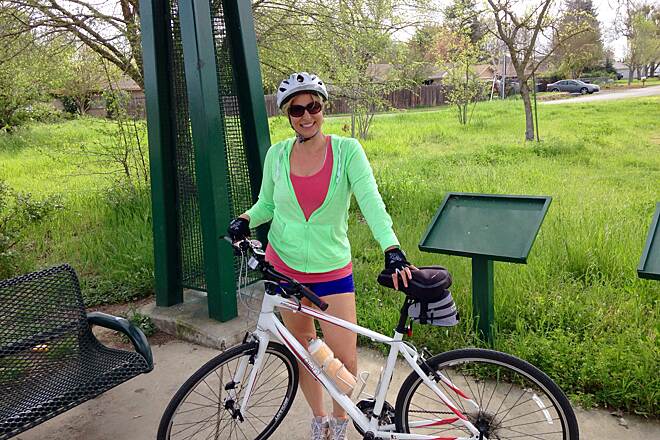 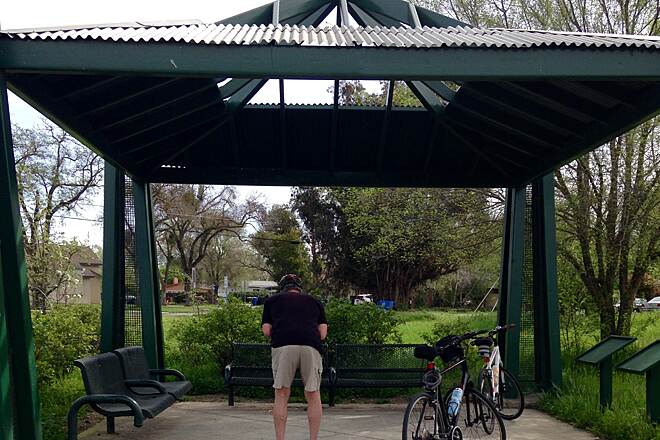 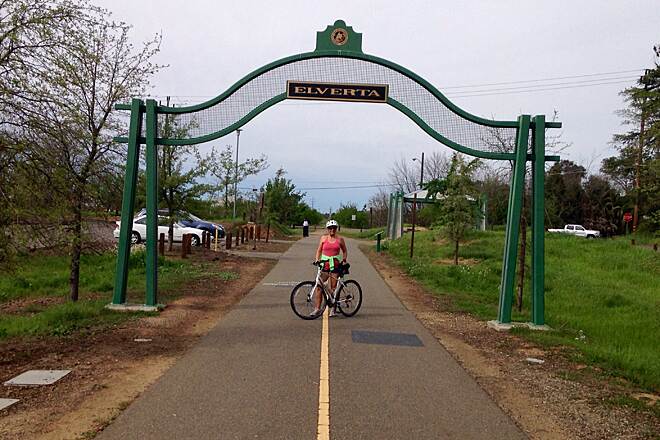 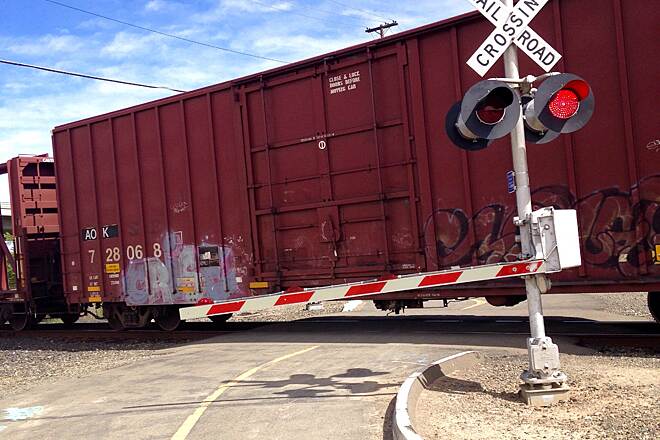 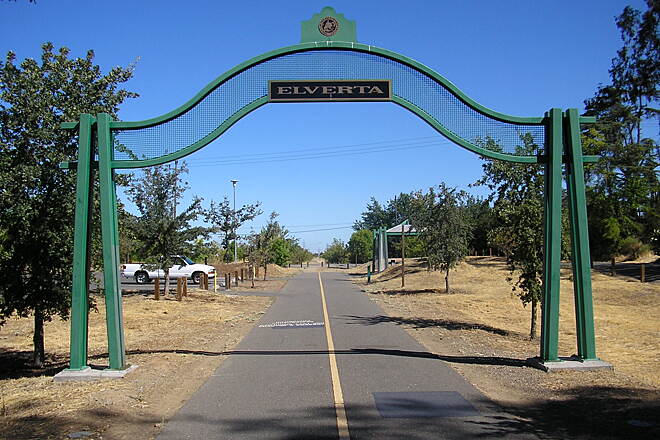 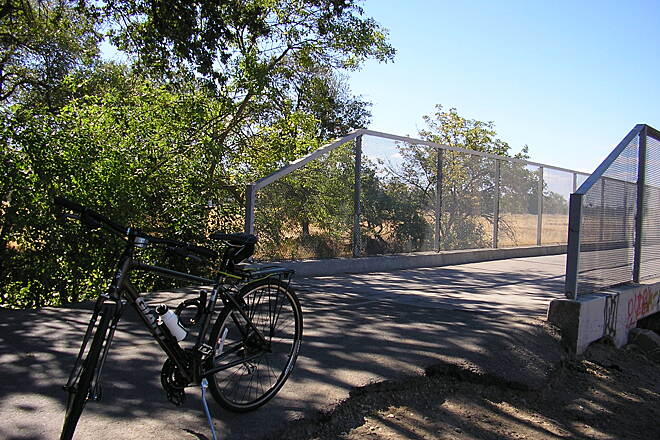 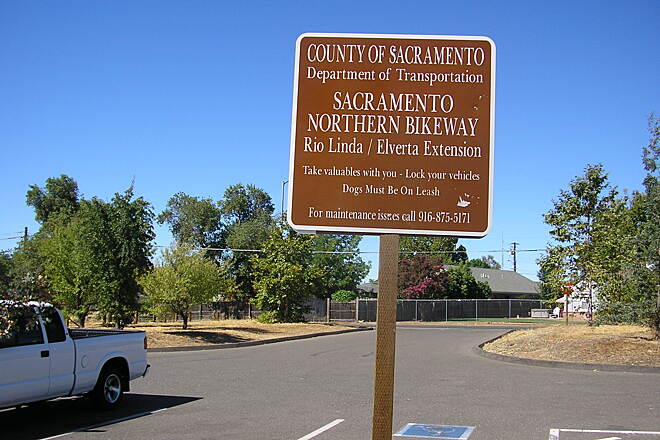 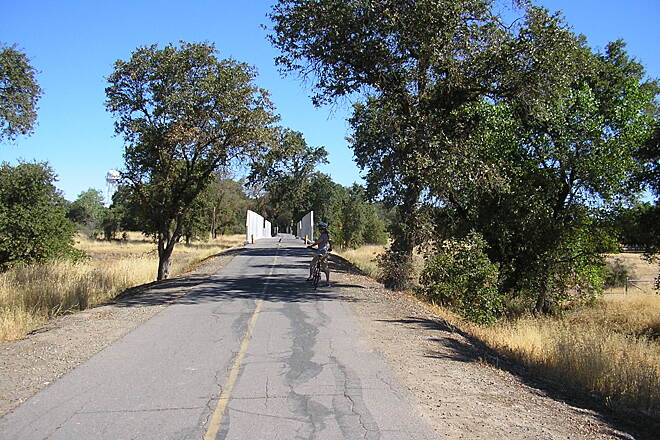 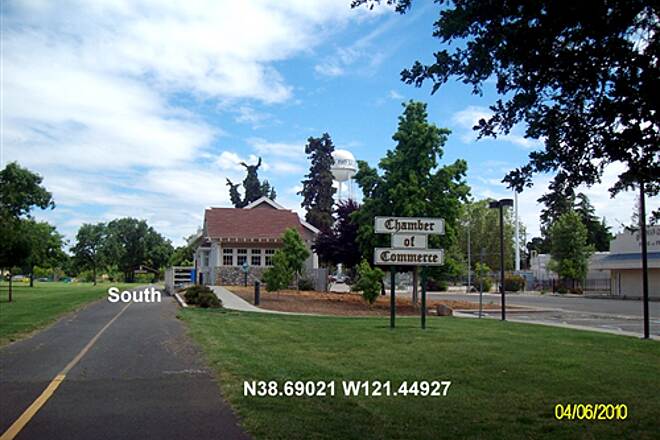 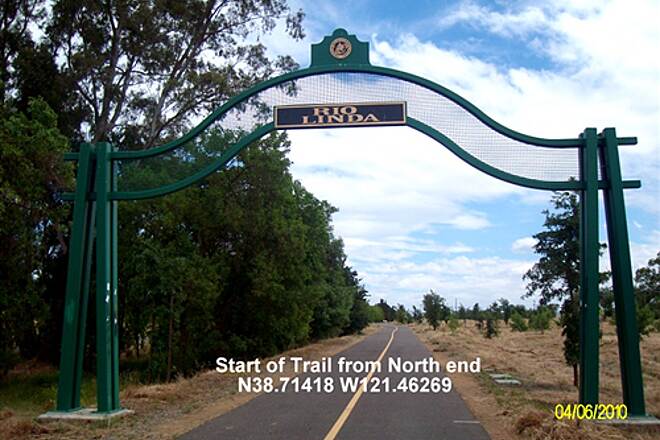 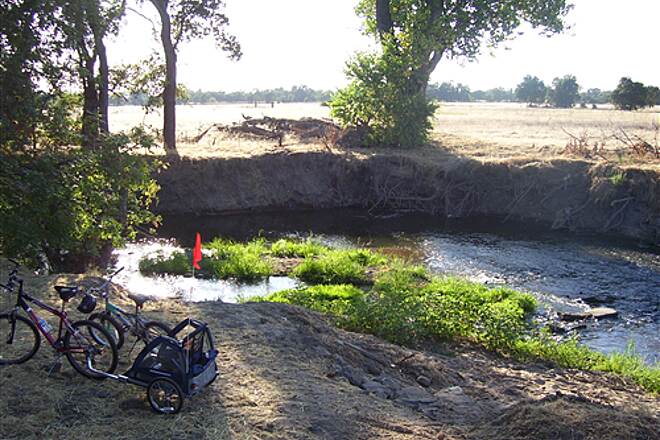 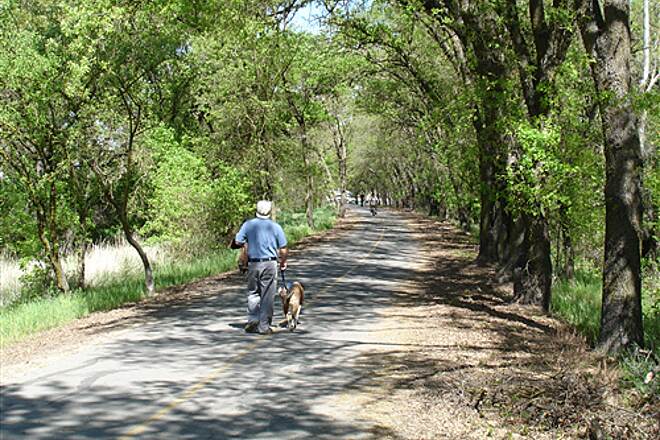 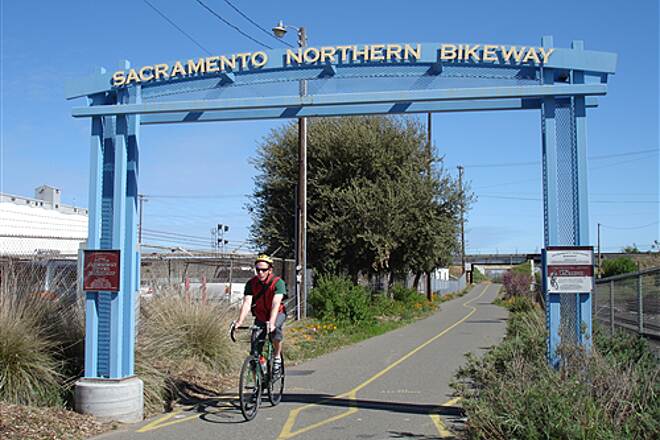 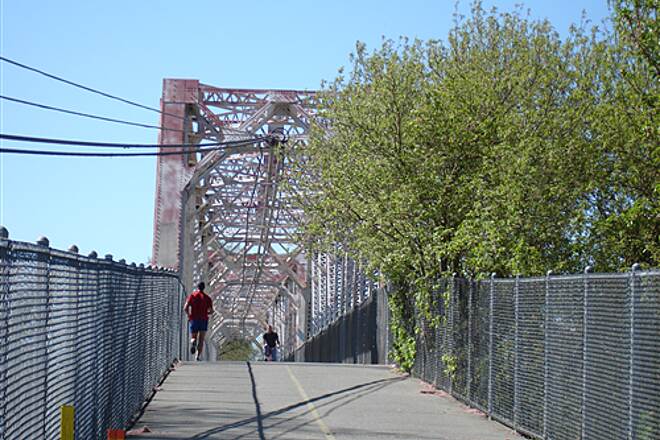 Follow the Sacramento Northern Bikeway for a tour of Sacramento and its surrounding communities, weaving through historic neighborhoods and parks and finishing in a scenic rural area. The paved trail also connects with a number of other local and regional trails and serves as a vital community resource for recreation and commuting to work and school. There are numerous shaded areas and rest kiosks along the trail where you might want to take a breather, especially if you're visiting during Sacramento's hot summer.

The trail runs along the former right-of-way of the Sacramento Northern Interurban Railway, which carried passengers between Sacramento and Chico until the line closed in the mid-1940s. Today you can enjoy many of the bridges and structures that were built for the railway.

Begin near downtown Sacramento on C Street between 19th and 20th streets and head north through an industrial area. After about 0.5 mile, you come to a T junction in the trail; bear right and soon cross a trestle bridge over the American River. At the 1-mile mark, you reach another T junction; turn left to merge onto the American River Bike Trail (a.k.a. the Jedediah Smith Memorial Trail).

Immediately after crossing Del Paso Boulevard, you enter Discovery Park, a popular spot for recreational boaters and anglers. Bear right at the first fork, and a small rise carries you onto the raised former rail bed, which offers a nice view of the park and its ponds and waterfowl. Another 0.2 mile down the trail you cross an active rail line. From this point on the trail is straight, smooth, flat, tree-lined and landscaped. You'll pass through an attractive metal archway each time you reach a new neighborhood.

Near the 6-mile mark, the trail heads into an agricultural landscape. You cross a series of bridges and ride under canopies of mature trees, with cattle grazing in pastures on both sides of the trail. Near the 8-mile mark, the trail reaches the Rio Linda Chamber of Commerce and Rio Linda Community Center, which has an adjacent playing field and BMX bike park. The trail continues for another 2 miles, ending at Elverta Road. You can either ride back to the beginning or arrange for a shuttle.

To reach the Sacramento endpoint, from Interstate 80 Business take the 16th Street exit. (If you are headed eastbound take the 15th Street exit.) Go north on 16th Street, which is a one-way road, to D Street. Go right (east) on D Street to 20th street, and turn left (north) on 20th Street to reach C Street. The trail is located between 19th and 20th Streets on the north side of the road. Ample street parking is available and a large gateway identifies the trailhead.

Great Trail for all levels

Flat, scenic and not too crowded, this is the perfect trail for cyclists of any level.

Need to view directions and give street location

For someone new to the area it would be better for them to view how to pick up and end a trail if it could be seen as well as described!

Good trail to bike on!!!

I really enjoy biking on this trail. It covers a good distance of non-stop free form bike riding on a paved bikeway. Since discovering it after moving back to Downtown Sacramento, I've been several times, and plan to go more!

Good On Northern End, but sketchy and dangerous elsewhere

North of the Interstate 80 overpass, all should be well. Rio Linda and Elverta, while rustic and not wealthy, are not dangerous.

South of the Interstate 80 overpass, the former railway turned bike trail goes into Del Paso Heights--one of Sacramento's ghetto 'hoods. And you will see locals sitting at various bench way stations, drinking their 40 ounces. Bicycle or walk in a group during daylight hours.

The Section of the trail through the American River Parkway to the southern terminous is full of homeless encampments.

This is a good ride. Pros: The trail is maintained and it is a good warm up to the bigger ride if you decide to go to Nimbus dam or Discovery Park. It varies from residential to scenic so it doesn't get boring. Cons: Yes, there tends to be a lot of foot traffic but that is expected as it cuts right through Rio Linda on it's way to the American River bike trail although the foot traffice has never slowed me down. Lots of road crossing in the residential areas which can be a hassle. Ride with a partner if you have one. If not, take pepper spray ladies and never ride the same days at the same times. Mix it up, don't make yourself a target.

Goes through some rough areas of Sacramento. Be careful and stay in a group.