Looking for the best Dog Walking trails around Saint Albans? 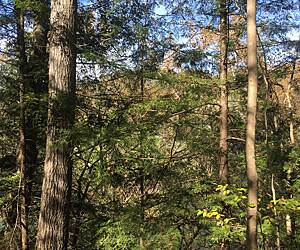 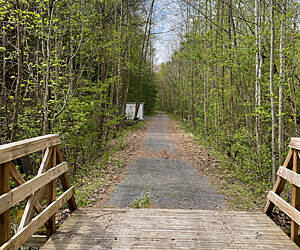 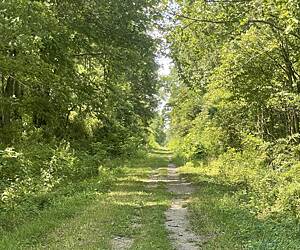 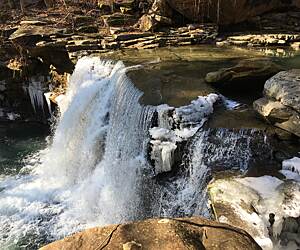 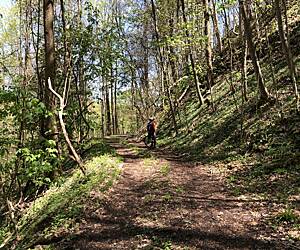 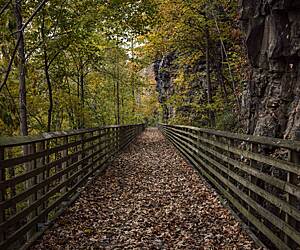 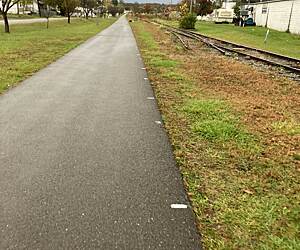 A scenic, but fairly rough, rail-trail

I rode the southern part of the Rend Trail today, up to the second trestle, which unfortunately remains closed due to being "critically structurally deficient". I am not an engineer, but it appeared that the steel substructure under the second section of the deck (from the south end) has slipped from its intended position. Unfortunately, it's probably very expensive to fix something like that in such a remote area.

As for the rest of the trail? It's quite scenic. Beautiful forest and mountain views. Sheer drops off to the east that are steep enough I'd need a topo map to tell you how far they drop, and equally steep mountain on the west side. Coal baron Rend built the trail in 1901-1904 for $350,000, and it's no wonder it cost so much, it's a small wonder the trail exists at all. Many rail lines have small areas that are challenging, more so in West Virginia, but on this one pretty much the whole route would be challenging to build.

Thus, TrailLink is correct that this is, technically, a rail-trail. But the farther you get from the southern trailhead, the less it feels like one. It gets narrower, eventually becoming a singletrack through a short meadow before opening up a bit before the closed trestle. It's also about 240 feet of elevation gain from the base to the closed trestle, which is officially 1.27 miles. The plus side is that you could likely coast most of the way back, but it's definitely rougher than the nice, crushed-limestone covered rail trail you may be expecting if you've ridden the Greenbrier River Trail.

There's also a Church "Loop" trail that you can hike from the Rend Trail, which takes you to the Thurmond Baptist Church, which from the exterior appears to be in fairly good condition for being in the middle of the woods. I put the "Loop" in quotes since I couldn't figure out how to make a loop out of it. It is definitely not bike-accessible, and still has some trees down across the trail from the hurricane last fall.

In summary, this trail is best combined with exploring Thurmond, and perhaps some of the other short, nearby trails. Expect some work but also some nice scenery, and you'll likely ride away happy.

We did a 39.1 mile ride on the Elk River Rail trail last Friday and it was decent. TrailLink states that the trail starts at Duck in the north but it is actually surfaced from Frametown to the north. We first checked the trail at Gassaway which the Elk River Trail Foundation Facebook page said it was open to. The surface from Gassaway to Frametown is pretty rough gravel so we skipped that part. We rode from Frametown to Ivydale and back. The trail is surfaced with fine packed limestone gravel and overall is decent. There are drainage issues that have created some small ruts at places but nothing terrible. All the bridges are nicely decked. The Elk River flows alongside the trail and is a pleasant, pretty river. As far as trailside amenities the only thing in this section are two new restrooms. There are no benches, pavilions or such. There is a small store at Duck that was open but we did not stop. At Ivydale we met a state park ranger who said the trail from Harland to Duck was now part of the state park system and they were working on upgrades and indicated benches would be part of that. He also said the trail would eventually extend through Gassaway up to somewhere around Burnsville. The ride was decent but I would not go out of my way to ride this trail - at least not yet. If you're in the area and want to ride, go for it. There's nothing else nearby. Hopefully, improvements will continue and this trail will only get better.

I started on Mollies Run rd side and initially couldn’t see the trail because there’s no parking. It’s residential area but there was a church (also really no parking) but i went ahead and parked at the church. First mile was a bit eerie because it was early I guess and no one else was on it. After a mile , i got to a busier side by the police and fire dept. I ran it 3 miles in and 3 miles back before some elevation. I enjoyed the run overall.

I’ve walked every section of this trail, morning and evening. Early mornings are great, both for light on the Kanawha River, and for having it to yourself. I look forward to the day when this trail connects to the Elk River Rail Trail, and other long distance trails.

We rode this Trail takes you down by the river passed a lot of historic places governor's Mansion capital beautiful scenery it's a great ride.

We rode this Trail takes you down by the river passed a lot of historic places governor's Mansion capital beautiful scenery it's a great ride.

We just stopped for a quick ride from Duck to Groves Creek to check out the trail on our way to Elkins. We loved what we experienced on this end of the trail! I can only imagine how gorgeous it will be in 3-4 weeks when the leaves change! We will be back to do a much longer ride! It’s a new trail so not much signage or amenities but I am sure that is planned in the future. Oh and lots of parking places at Duck and it’s a quick trip off of I-79!

The National Park Rangers told me in Aug 2021 that it is closed until further notice, at least a year. An old mine was not closed properly and filled with water and a landside was swept over the trail. There did not seem to be a parking lot from the north end, Wolf Creek end by the New River Gorge Bridge. No more than a gravel area for a few cars at the most. If there was no room to park your car you would have to exit on a one way loop road that would take 45 minutes to get back on the highway. They are working on it so maybe next year?

The Gallia County Hike & Bike Trail currently consists of two unconnected segments -- The paved “Riverfront” segment which is located within Gallipolis, and the crushed stone/grassy “Northwest” segment that runs between the towns of Bidwell and Kerr. Google Maps and signs along the trail use the O.O. McIntyre Park (District) moniker with individual trail sections given trail names. I parked and started from Haskins Park located somewhat in the middle of the east-west running "Riverfront" section in Gallipolis. If you head east, out of Haskins Park, the trail travels 2.3 miles past both the Cliffside Golf Course and the Gallia-Meigs Regional Airport. This segment ends at Lee Road. The trail could probably be extended up to Addison from here, but I’m not sure anyone is currently clamoring for that, as I was the only person on this section of trail both out and back. West of Haskins Park, once you cross OH-160 (Pine Street) the trail parallels that road. This 4 mile section crosses OH-160 up by the Holzer Emergency Medical Center and ends under a US-35 overpass after crossing over OH-160 again. These paved sections of the trail are in very good shape except for the short half mile section near the Holzer Emergency Medical Center where there is quite a bit of tree root uplifting of the asphalt. Once you arrive at the US-35 underpass near the Holzer Medical Center there is a gap of about 2 miles in the trail between this ending and the town of Kerr.

The "Northwest" segment of the trail runs from Kerr to the town of Bidwell, Ohio. This segment of the Gallia County Hike & Bike Trail is not as developed as the one in Gallipolis. The trail here is crushed stone and grass covered. This 4 mile section of the trail seems to have been greatly ignored. There was little evidence that trail is used very often. I rode south from Bidwell towards Kerr. For most of the ride out of Bidwell the only way that I knew I was on a trail was that there was an unobstructed pathway of grass surrounded by trees and brush on both sides. I crossed over a wooden bridge spanning a creek which had had some of its planking replaced but other than that there was little sign of this trail being used at all. After traveling about 6/10ths of a mile, I crossed OH-850 and came to a dead stop. What should have been a continuation of the pathway had disappeared and nothing but trees and brush stood in my way. From satellite and street view images on Google Maps this should have continued to be an open dual track pathway so I’m not sure how out-of-date the Google Maps images are. There was a nearby driveway which I chose to ride up to see if I could see if the trail was still viable beyond the OH-850 crossing. From the driveway, I walked down to the old rail bed and took a look around. It was clearly overgrown. I walked for about 2/10ths of a mile and while I could have easily ridden in the direction I had been going, the pathway was not as clear as before, so I decided to turn around. Perhaps, if I had started in Kerr and headed north the trail would have been more easily identifiable. However, there didn’t appear to be any defined parking for the trail in Kerr. In my opinion, until Gallia County decides to make improvements to this portion of trail, I wouldn't bother to attempt to ride this trail segment.

If you do find yourself in the Gallipolis area the paved portion of the trail is worth seeking out. If the Railroad Freight Station Museum is completed that could be an interesting venue along the trail. Bathrooms and water are available in Haskins Park.

Nice trail however some parts are becoming overgrown with weeds and sumac. Trash bags strewn about near what looks like the city sewer plant. There’s also some areas with roots growing through the asphalt. Overall a great ride though

Great for and Easy Ride

My wife and I road the entire trail from the Exxon to Lee St. 13 miles total (6.5 one way). Took us about an hour and 20 min but we took it easy. Trail is very well kept, a few joggers and walkers along the way, everyone was very friendly. Hit up the shake shoppe when you are finished, great shakes and malts!