Looking for the best Atv trails around West Allis? 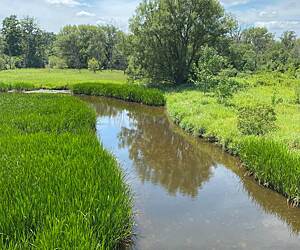 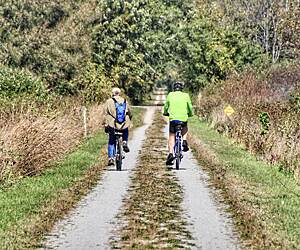 Beautiful trail between Lake Mills and Deerfield. Ice cream in Deerfield! No ruts - hard packed crushed limestone. I rode my road bike with out problem. Just wish they had ice

Nice trail for a day ride

We started at the Congress St Trailhead in Burlington and rode north to where the trail crosses Heg Park Rd. and turned around (needed to get back by lunchtime). The trail is primarily dirt, which was fine for our gravel tandem. While the trail crosses RT-36 (no signals, just a painted crosswalk), the traffic was light enough for us to get by. The median is wide enough to safely stop in if traffic is busy. The turn from the parking area at Saller Woods is a bit sandy and can lead to wipe-outs. It really needs to be wider and less sharply curved. The section of the trail from N Browns Lake Dr through Case Eagle Park out to Buck Rd (in Waterford) is paved and is a delight to ride on. North of Beck Dr (RT-20) it's back to dirt. Overall a nice ride for the morning.

I rode the entire trail. It was well maintained, labeled and fun to ride. At Capitol drive you can still see remnants of when it used to be a railroad yard to store the rollingstock for the beer industry. There is a lot of really nice art work along the trail and best of all, you can end the ride at Lakefront Brewery for a cold beer!!

My only gripe is that there are a couple of spots in which you have to ride the road for a block or two because companies have purchased the rights along the original railroad corridor.

Ok but not a lot of features

I started at the trail head in Cottage Grove. Paid my $5 and took off east. The path is mostly crushed lime stone and nice riding. It has slight grades but no hills. The trail is mostly straight and flat which is why I say it lacks features. Yes I know it is a converted train tracks. Lots of farms and fields with flowers. (features?) Also tree lined. It goes by many small towns along the way but they looked deserted. Didn't see many people.
I think riding the IPP and Fox River trail is better.

We absolutely loved this trail. We started near the airport in Watertown Wisconsin and took the back roads all the way to the end of the marked trail. There’s a small 2 mile segment that’s a long state route 16 but it’s a dedicated trail on the side of that road. Loud traffic but just a small section so not that bad of a deal. Everything else is beautiful country roads very little traffic absolutely wonderful rolling Hhills and farmland. It took us three hours round-trip very leisurely pace of 9 mph Be sure to eat at the Main Street diner in Watertown

The Menominee Parkway section is horrible! So many potholes! I popped my tire and had to get an Uber back. My first ever experience with an Uber, which was much better than my bicycling experience!

Pros: fast way to get north-south or vice versa, mostly clean gravel.
Cons:Many streets to cross, if you don't keep your head on a swivel and you stop, you have a great chance of being mugged.

good for walking, great for biking.

This trail is very scenic as we biked north from the Ozaukee trail. We immediately could tell the difference as this trail had a more wooded or nature feel. We stopped and turned back at the trail’s end just short of Oostburg rather than following the quiet roads the short distance into the village. We wish the trail continued further into Sheboygan County without the reliance on county highways. It’s a great start!

We did the northern leg the second day, parking at the DOT park & ride lot at the I43 northern exit. The scenery is mostly farmland with flat terrain. There are areas with potholes which may be marked with painted circles. It is a great exercise trail as the lack of curves and people walking the trail allowed us to bike faster than normal. We continued further on the Sheboygan County trail at the north end before returning to Port Washington.

This is a very nice trail, well maintained and well marked when you’re biking quiet streets in the various communities. We stopped in Port Washington at a lakeside park for a break before returning to Mequon.

Two of us rode the McClory southbound on July 2, 2021. We experienced few of the negatives described in other reviewers, especially the ones from years ago. Near the northern extreme of the trail, we experienced two spots with a little broken glass, but literally a couple of feet each and they were past. There were some gritty-looking areas surrounding the trail, mostly in Waukegan, but no people or areas anywhere that felt truly dangerous. The trail crosses a lot of streets and that slowed us down, especially since we had been riding several hours. The path was well kept throughout; it was easy to ride and we never had to reduce speed because of the surface. It's also not excessively dusty; no need to wipe down our bikes at the end of the day. We still prefer paved trails, but there's no doubt: combining this trail with the southern Kenosha County trail is an easy way to get from Wisconsin toward Chicago. The paved part, from about Waukegan through Highland Park, is a little faster and almost entirely flat. At Lake Cook Road near the Braeside Metra station, it connects with the Green Bay Trail to continue toward the city.