Jay, ME Atv Trails and Maps

Looking for the best Atv trails around Jay? 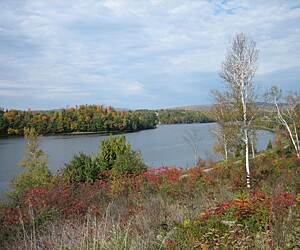 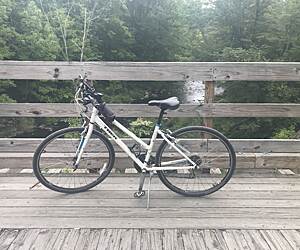 Initial trail has a lot of barberry blocking it, then the entire trail became deep mud, and finally it was reasonably clear for the rest of the path. The path had about 5 bridges, 2 were completely rotted through, but I just passed under them since the stream was only a trickle. One area was marked with a Poison Ivy sign, but I did not see any, I think it’s just starting to come out so I may have been lucky and gone early enough to miss it. Evidence that a beaver was munching on some rather large trees. Beautiful view of the river near the end.

Even with a mountain bike, the trail was simply unridable in parts due to the sand. I started about a mile or two north of the southern end and rode north. The first three or four miles were doable but after that, it wasn’t rideable and I had to turn around. Perhaps the trail is rideable based on the time of the year, and maybe the northern section is better. But the southern end wasn’t worth the trip.

There’s a lot to like about this trail: •easy ride and it has some hills and curves to make it interesting •scenic •easy parking •well marked •well maintained with a few bumps But there are a few negatives with the major one being the gap in Hallowell. For roughly 1/2 - 3/4 of a mile, the gap in the trail requires one to ride on busy Water St through the downtown area. It’s certainly not the worst road to ride on, but traffic can be heavy and you need to watch for car doors opening. The trail is also very narrow in spots making it difficult to pass through. But overall a nice trail that is worth a visit.

Beautiful trail! Met a fellow bicycle rider from New Jersey who helped encourage me through the rain!

Beautiful trail! Met a fellow bicycle rider from New Jersey who helped encourage me through the rain!

We began the trail at Miller's Park also known as the Papermill Trail. Nice and easy, great asphalt path

We began the trail at Miller's Park also known as the Papermill Trail. Nice and easy, great asphalt path

Rough for the first 8 miles...

I started at the western trailhead. The surface for the first four miles is large diameter crushed stone. The same stone used in the trailhead parking lot. It's not the kind of crushed stone you put on a multi use recreation trail. The next four miles was basically rough single track. I rode my gravel bike based on the (lackluster) description above. I jumped off at 8 miles and returned to my car on back roads. The crushed stone listed on the surface description is very misleading. This would be fine with a mountain bike. Front suspension would be best.

Rode this 15 miles from Anson area, on August 27, 2021, on my gravel bike. Really not suited for a road bike. Some bumpy sections and a few sand stretches. Plenty of pot holes. This is a very beginner friendly gravel trail.

This is a great place to walk with a wheelchair or stroller, thanks to the tar, cement and brick walkways. I took my mom in her wheelchair and she was able to see swimming ducks, the river and the falls from her chair thanks to the open fencing and observation decks on the bridge. It's a well used trail, and goes past restaurants and apartment buildings. A great place in the city to enjoy nature.

This is a great trail for strollers or wheelchairs. It's short and crosses main roads, but it's well marked and has a good base for pushing a wheelchair.

This is the second time I go bike riding in 20yrs and this path was so nice n easy. I found there to be a couple slight slight inclines but, not bad at all considering how out of shape and how long it’s been since I’ve gone bike riding. Beautiful little views. Beautiful little picnic areas. I saw all ages on the path from like 3yrs to 80s either bike riding, scootering, walking, or jogging. Definitely a nice little place to go.

This was a cute little path to ride. I’m just getting back into bike riding after like 20yrs (seriously) and this path was awesome to ride. Today was only my second time taking my bike out. There were a couple slight inclines that weren’t bad at all. I did have to take a break or two before continuing on them but that’s only because it’s been so many years for me. I even saw little kids riding their bikes (3-5yrs) and elderly folks as well! Amazing little path. ¿¿

Auburn, ME
Augusta, ME
Bangor, ME
Bar Harbor, ME
Bath, ME
Belfast, ME
Berwick, ME
Biddeford, ME
Brewer, ME
Bridgton, ME
Brunswick, ME
Bucksport, ME
Buxton, ME
Camden, ME
Cape Elizabeth, ME
Caribou, ME
Accordion
Eliot, ME
Ellsworth, ME
Fairfield, ME
Falmouth, ME
Farmington, ME
Freeport, ME
Gardiner, ME
Gorham, ME
Gray, ME
Hampden, ME
Hermon, ME
Houlton, ME
Jay, ME
Kennebunk, ME
Kittery, ME
Lebanon, ME
Lewiston, ME
Lincoln, ME
Lisbon, ME
Madawaska, ME
Madison, ME
Millinocket, ME
New Gloucester, ME
North Berwick, ME
Norway, ME
Oakland, ME
Old Orchard Beach, ME
Old Town, ME
Orono, ME
Paris, ME
Poland, ME
Portland, ME
Presque Isle, ME
Raymond, ME
Rockland, ME
Rumford, ME
Sabattus, ME
Saco, ME
Sanford, ME
Scarborough, ME
Skowhegan, ME
South Berwick, ME
South Portland, ME
Standish, ME
Topsham, ME
Turner, ME
Waldoboro, ME
Waterboro, ME
Waterville, ME
Wells, ME
Westbrook, ME
Winslow, ME
Winthrop, ME
Yarmouth, ME