Looking for the best Mountain Biking trails around Newton? 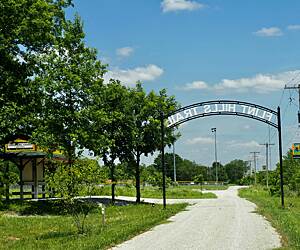 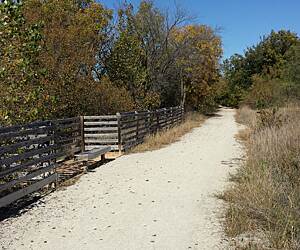 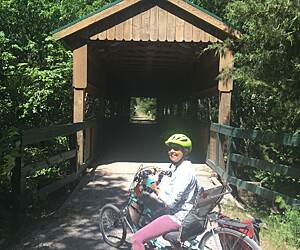 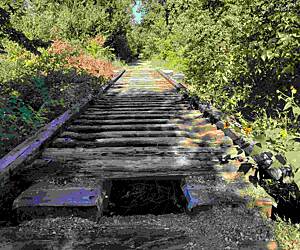 The vision for the Sunflower Santa Fe Trail is a grand one: 33 miles across a scattering of small cities on the windswept prairie of central Kansas. The heart of the trail lies in Galva, just an hour...

The vision for the Sunflower Santa Fe Trail is a grand one: 33 miles across a scattering of small cities on the windswept prairie of central Kansas. The heart of the trail lies in Galva, just an hour...

Started at south end and rode to the north end, then returned. Switched sides of river a couple times. The trail at each end isn’t as nice as the portion of trail at the middle part of the trail at the “Keeper of the Plains” plaza. The plaza area is very nice with a Veterans Memorial park to see in addition to the Keeper. Plenty of walkers and riders on the trail on a nice Saturday afternoon. Recommend this trail.

This was our first trail ride and we have ridden two sections with our city commuter type bicycles. Both were nice rides. First section was starting at Hoover Road going west. We found convenient parking at a nearby empty business lot. The trail was an easy smooth ride until we got near maize road where the trail intersects the Air Cap memorial park single track area which was rougher ride and we became completely confused where it comes close to Pawnee Prairie park and lost the trail. We could possibly have taken city streets to continue to Maize road but decided to go back instead. Next time we went out to Goddard KS where there is a very nice city park with convenient parking and rode East. Goddard does a very good job maintaining this section of the trail which was shaded and quiet and more like a ride in the country. We rode 4 miles east and then returned. The gravel was smooth and easy to ride on. However we found out going east on this section is a deceptive gradual down hill slope so the return was more of a struggle going up hill. Hope to return to Goddard again and make it all the way to maize road plus eventually ride west from Goddard on that section. We really enjoyed not having to fight with city traffic on the streets and the related traffic noise. It was a much more relaxing and stress free riding environment.

Started the trail at Vasar and rode 11 miles west. The first seven miles were on mostly crushed stone that has been in use for many years. It was nice riding but did have some soft spots from recent rains. The final four miles were on a new trail surface of finely crushed stone, nearly like sand but well compacted making for a very smooth ride. Not exactly like a paved surface but close to it. This portion of trail had many trees along side and is mostly straight with some grade but very little. We enjoyed the ride through the countryside.

Good natural surface with some overgrowth attempting to encroach on the trail. We didn’t ride full length, started at connection with Valkommen trail in Lindsborg. Would be worth riding more, time permitting. Would be nice one trail completed.

Nicely done trail with lots of information signs along the trail telling the history of the town and the Swedish folks that settled in the area. Paved and wide trail. South end has a connection to the Meadowlark trail for a more countryside ride. Recommend this trail when in the area. A number of other riders/walkers encountered on the trail, all with a friendly wave and Hi!

No real trailhead parking Hoover Dr end of this trail. It follows along the back door of commercial and industrial properties. Not much to see.

Took a break from crossing Kansas to ride a portion of Flint Hills trail. I road east for about 12 miles, then back. A good ride despite rather blustery weather on Apr. 21, 2021.

I have ridden this entire trail all at once and many times in pieces. The trail west of Bushong may be some of the most beautiful scenery I've experienced on any trail, ever.

The only reason for the 4 stars and not 5 is that I think a few more amenities would be great. More water, maybe a small shelter or two like you find on the George Mickelson trail in SD or even the Chief Standing Bear Trail in NE. I suspect those will come.

Thank you to all the volunteers that keep this trail in such good repair in the variant Kansas climate. It's a great ride. Make sure, however, you have water, sunscreen and whatever you need because it can be desolate... which is the best part of the trail.

Just rode the entire trail with my daughter, Oct 16 and 17. We started in Council Grove and rode East. We were on hardtail mountain bikes.
From Council Grove to Osage City the trail is in absolutely perfect condition. It's wide, (10 -12 feet),smooth, hard and fast. Many times I thought I was riding on pavement. I even locked out my front fork because I didn't need it. All the bridges are new. Guys with road bikes, have fun you'll fly. Congratulation to the Parks Dept for all their work, this portion is as good as it could be.
Then you hit Osage city. Oh boy, time to unlock the fork. From there to Vasser it's pretty rough. You come to HW 31 on the East side of Osage City and your looking at a overgrown weed patch along the junkyard. The sign said it's the trail so we went. There is still a pretty good gravel base so just pick your line and go. Then heading east go through the parking lot at the grain elevator and the trail stops at 5th st. There is no signage. We just kept going straight because there were no " private property" signs. It's all grass no path. Then at 6th street you have to detour to the south on Lakin Street. Ride Lakin east and turn left at Sonic then North back to the trail. It's a very short detour, no big deal.
From here to Vasser, again it's hit and miss. Some sections are OK and others are pretty rough. We were lucky because it hadn't rained in a while and trail was bone dry. There are lots of sections that are just dirt that would very tough if it was muddy. There was one section just as you go over the bridge at HW 75 that was very fine deep loss dirt. It was dry and we still had to ride in the weeds on the shoulder where the ground was hard to get through. If that was muddy, forget about it.
From Vasser east the trail goes back to the " improved" condition.
We got off at HW 368 and went north and camped at Pomona State Park.
Very nice park with facilities. There is also a good restaurant on the left by the motel and golf course. Open all day.
Back on the trail in the morning and through the only tunnel on the trail under HW 268. Like I said from here on the trail is back to the " improved" condition. Not quite as nice as from Council Grove to Osage city but still very good. Just a few more bumps and chatter.
Lot of dead trees down but that was because of the bad wind storm we had the night before. We weren't in a big hurry so we just cleared them ourselves.
I did run into a parks truck doing maintenance and got a lot of good info.
That bad portion through Osage City is waiting on some bonds for funding and that eventually the trail is going to have bathroom facilities, water and mile markers just like the Katy. They already have mile markers from Ottawa to Osawatomie.
Anyway heading east we ran into a big detour at Iowa rd. The trail is closed there or should I say non existent. You have to take the detour which is well marked and takes you out on the country gravel roads. The roads aren't bad. It's not the " big" gravel you think of when you hear " gravel road" but fine crushed gravel very similar to what's on the trail. The detour is about 3.5 miles and you get back on the trail at Louisiana Ter. At this point your about a mile West of Ottawa.
From Ottawa to Osawatomie the trail is in great shape but some of the bridges haven't been replace or updated yet. There are about four or five with no railings. Most aren't very high but one is about 30'. I just mention this in case someone is taking some young kids. On that big one I don't know why they couldn't a least put in a couple posts and at least string some cables just so there is some protection.
The trail now does go all the way to the Karl E Cole baseball complexe and ends there in nice big parking lot.
I hope this update was useful. Reading older posts when I was researching this trip I was expecting the worse but i can tell you that we had a great time and the trail is in great shape with that one section and detour as the exceptions.

Rode the trail starting in Osawatamie. Trail was in great shape, though some parts had a lot of leaf coverage. Despite this, no issues with surfaces or slippage. Such a peaceful trail to ride. And it flows super fast.

This is a nice, short trail. We walk our dog on it almost daily. Flat terrain, both woods and open fields. The trail also connects to the disc golf course in Marquette.