Looking for the best Atv trails around Somerville? 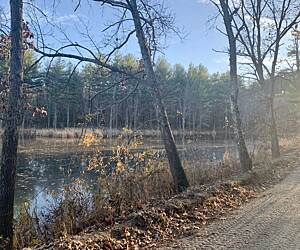 Quiet, hidden trail. No obstructions and could navigate well on snowpacked gravel trail. Was a relaxing walk as there were no unleashed dogs or unmasked people.

Quiet, hidden trail. No obstructions and could navigate well on snowpacked gravel trail. Was a relaxing walk as there were no unleashed dogs or unmasked people.

I've noticed some criticism of this trail that I think would be unfair. It's clearly not among the most enjoyable if one compares it to riding the Battle Road Trail, but it's conveniently located. I know these trails closer to cities with higher population are most often paved, but this would be superb if it were dirt. I love the rocky section and the section closer to Lynn that's still dirt, ironically the parts that receives the most criticism.
When you want to ride your bike, and you're close to the Everett area, this trail provides a path half way to Salem MA without having to bike streets that aren't very "bike friendly".
The southern sections I agree aren't the greatest of scenery and there are a few street crossings, but there are some relatively peaceful areas on that section. And the northern half has some wonderful areas surrounded by trees. Call me an optimist but I can't complain about minor details of a path that's in a location that really needed a path for cyclists. I heard a rumor that it's going to be extended soon--a path that took us closer to Salem or Peabody would be ideal, but it's incredibly handy and I live nearby it. I've never seen it crowded or have high traffic. There are quite a few stops on the south section if you need a store or to avoid some bike-commuter street traffic in the Everett to Malden areas, so what's NOT to like.

My friends and I ride hardtails through there and really do enjoy it. I'd prefer a dirt trail instead, one more friendly to a full sus' frame, but for that it gets only 4-stars from me lol! ANY trails/paths in these more populated cities are HIGHLY welcomed and speaking for myself, sincerely appreciated. Ride it the FULL distance south to north (it's short, like 8 miles) and see how you'll enjoy it even more if you haven't ventured to the northern half. At the traffic intersections just be careful, which isn't a big deal for someone like myself that bikes through Boston all the time.

If you are using a manual or electric wheelchair, park at the Fruit Street entrance (airport end). If you park in the municipal lot, you will need to cross a busy street and go over a small patch of grass/gravel to get to the path. This trail is flat, smooth, and the people (and their dogs) are friendly!

Great trail. Wonderful walk but, caution, it reads as 3 miles on the surface. It is actually 7. Once you read all the detail you see that 4 miles more through Brookline.

Great trails to take you out of the city.

Trail has degraded for cyclists

The portion of the trial from I-95 to Hayfield St has substantially degraded for cyclists. A small portion of trail floods for a good portion of the summer (thank you beavers!). The flooded portions can be walked around.

New in 2020 are sand and rock obstructions in which your tires sink and it is impossible to continue pedaling without walking a bit. Maintenance on this trail is sufficient for vehicles, walkers and the utilities, but my mountain-style bike struggles.

It is an interesting trail otherwise in the middle of know-where. Pity.

My husband and I rode the Upper Charles Trail from the Hopkinton start to the near end in Holliston this last Saturday in November 2020. What a pleasant surprise! We enjoyed very pretty scenery in Hopkinton, a great lunch at Oliva's Market in Milford, visited the brand new Boston Honey Company store in Holliston, and marveled at the historic Phipps Railroad Tunnel under Highland Street. The trail changes from asphalt to very rideable stonedust in Holliston. At just over 13 miles one-way, the trail is a great way to enjoy being outside and getting some great exercise to boot! I thoroughly recommend this trail to anyone who likes pretty scenery, and great stops along the way.

Rode the eastern section of this trail from the parking lot at the end of Adams St in Uxbridge to Grove St in Franklin, approximately 11 miles. For the first 3.5 miles the trail is part of the Blackstone River Greenway and is in excellent condition with smooth blacktop surface. You'll see cyclists, skateboarders, runners and walkers on this section. The improved trail ends in Blackstone at Canal St. Follow Canal St downhill, make a left onto St Paul St, then right on Main St, and left into Castle Hill Way. The Southern New England Trunkline Trail (SNETT) resumes without markings at bend on Castle Hill Way. Surface now is packed dirt. Condition of trail worsens (sand, rocks, ballast) between Farm St and Center St in Bellingham. From Center St to Prospect St in Franklin, the dirt trail surface is groomed and in very good condition. The Prospect St bridge is now complete and the trail continues to Grove St in slightly rougher condition.

I definitely preferred this 11 mile Eastern section of the trail over the 12 mile Western section (in Part 1 of my earlier review).

Nice trail that connects historic towns of Salem and Marblehead

Consider this a great way to travel between two lovely towns rather than a picturesque trail with stunning views all the way. However take in a great view from the end of the bay at the Lead Mines area. In summer hundreds of fishing and pleasure boats are moored between the towns of Salem and Marblehead . If ,coming from Salem , you take the right spur to Swampscott the trail ends and there isn’t much to see like there is in Marblehead or Salem. In Marblehead make sure you visit the old fort and gun battery .

Started off in Winchendon Center - plenty of parking. Trail is paved and easy. Stretches along Whitney Pond and thru some marsh land. It is really beautiful. We caught it on a overcast and pretty cool day so it was not crowded - most people were masked. Winds its way along Rt 12 an ends at North Ashburnham Rd at which point you have to take a right on the street, then a right onto Rt 12 (be careful - easy to walk tho), then take the first left onto Old Gardner Rd. Follow Old Gardner Rd a short distance (5 mins or so) to the next portion of the trail. There is also a lot here and pick up the trail. We walked only about another half hour before we had to turn and go back. This is a really nice trail. Highly recommend it. We hope the two portions somehow get connected. If not, signage would really be helpful. Enjoy.

Not in a great area

Where this trail starts in downtown Nashua is not a great area. We biked it recently to get access to the Mine Falls Park. About half way down the trail is better but would probably have to park on a street. If you are looking for a nice bike ride I suggest the Nashua River trail. Mine Falls is nice but you are in the minority if you are biking. There are a lot of walkers.