Looking for the best Snowmobiling trails around Ohio?

City Trails and Maps in Ohio 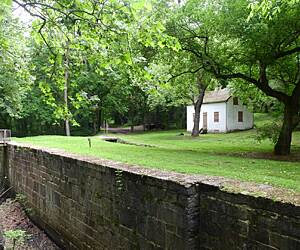 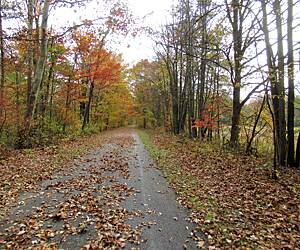 This refers to a trip on August 8, 2020 that started from Gardner Athletic Field in Washington Court House and proceeded south-east along the Paint Creek Recreation Trail as far as was possible. About 24 miles south of Washington Court House, the southbound trail was partially blocked by a temporary fence. I walked around this fence and then rode over one bridge and then a second bridge. On the southeastern side of this second bridge the trail was blocked by a 4-foot high, padlocked fence. The lock was apparently installed to prevent northbound users from accessing the bridge I just crossed. Main point: the trail is closed for maintenance about 24 miles southeast of Washington Court House between Musselman and Anderson.

If you were starting in Chilicothe, you should be able to ride about 10 miles before you'd be forced to turn around.

Other than that, it was a beautiful day for bike ride. Much of the trail is shaded. While there are a few bumps on the paved trail due to root incursions, they are scattered over the length of the trail. The worst ones have been spray painted white to draw your attention. Although not crowded there were a few other riders, joggers and walkers enjoying the trail.

We ended up not riding this trail, but had a nice drive along back roads along the river searching for parking. We stopped and walked part. Overgrown with grass. Would be more appropriate for a mountain bike.

This is not really for people used to larger parks. It is nice, but more for locals than people traveling just for this.

We drove 90 minutes from Pennsylvania to bike this trail and it was well worth the trip. Started in Lisbon and rode the whole way to Washingtonville and back. The trail is well maintained asphalt, mostly level and probably 75% shady, going through some lovely wooded areas. There is a little off- trail street section through the village of Leetonia, which is well marked, does include a few steeper sections, but very little car traffic. Several trailheads along the way included portajohns. Overall, a highly recommended trail.

I last rode the West Branch Trail back in April of 2017 before it was recognized and listed here at TrailLink. This rail trail travels from Canton, Ohio's Covered Bridge Park past the Pro Football Hall of Fame and the William McKinley Presidential Memorial until it ends by the softball/baseball fields in West Park at 9th Street SW. The two constants that exist as you travel this trail are the waters of the West Branch of Nimishillen Creek and the traffic noise of Interstate 77 which parallel this route.

Despite running along an Interstate Highway through a large city, the majority of this trail route runs through a series of parks which provide shade, low traffic, and wild life, particularly water fowl. Major points of interest are the Pro Football Hall of Fame & Museum and the William McKinley Presidential Library, Museum, and Gravesite. I enjoyed riding through Stadium, McKinley Memorial and Water Works Parks in particular. The trail surface for the most part is crushed limestone which is well packed. If you travel from the south the trail's stone surface changes to a concrete sidewalk at the intersection of Stadium Park Drive NW, Harrison Ave NW (which leads uphill to the Pro Football Hall of Fame) and Washington Blvd. NW. If you ride/walk north on this widened side walk you will pick up the northern portion of the trail when you cross Fulton Dr. NW. I point this out as there is no signage at this point indicating the sidewalk is actually part of the trail. Those that have traveled from Covered Bridge Park south will better understand that this is the connection to get back to their starting point.

The West Branch Trail is a pleasant trail that is worth checking out. I would like to see the leaders of both Canton and Stark County consider expanding the reach of the West Branch Trail so that it would connect to both the Pioneer Trail around the campus of Malone University, and the Hoover Park Connector Trail without subjecting riders to on-road connections. At that point Canton could say that it was truly creating a bicycle network worthy of their citizen's attention.

Part of a Community Trail Network

This trail is primarily a commuter/recreational trail which is designed to connect residential areas with parks, the local high school -- Canton Glen Oak, the Marketplace at Washington Square shopping center, and Walsh University. This trail connects to the Hoover Park Connector Trail which gives the rider access to additional parks and North Canton Hoover High School.

The trail surface is primarily crushed limestone, with short sections paved with asphalt or with a chip and seal surface. I found the chipped and sealed surfaced somewhat hazardous particularly on the turns because there was a lot of loose stone in those turns. I found that surprising as the stone on that type of surface is imbedded and rolled in tar. Fortunately this surface was more of an exception rather than the rule for this trail. The trail has a few short climbs that exceed a 5% grade, but they should not prove much of a challenge for anyone who rides with some frequency.

While I would not characterize this trail as a destination trail for people outside of the area, I can see that this trail has great utility to the local residents who can utilize it to travel between popular community facilities.

This is a favorite route for my wife and I when we want an easy ride, especially if we bring along friends that do not do a lot of riding.

Because of all the streets the trail crosses, it presents a GREAT opportunity to teach & reinforce how to avoid dangers when crossing streets (almost every ride has me holding up our riding group as a vehicle runs a light/stop-sign/crosswalk, or turns right while driver is looking left).

A treat is to stop at El Tren Grill for lunch (access from trail, outdoor seating; restaurant with caboose & Pullman car). Just about 3.5 miles from trailhead makes for an easy ride back (which is good; they serve lots with each order).

We look forward to Phase 3 being completed into downtown Akron.

We are really enjoyed our bike ride. The only reason I gave it four stars instead of five is because on the offshoot paths where the fishing spots are, there's a lot of broken glass.

We are really enjoyed our bike ride. The only reason I gave it four stars instead of five is because on the offshoot paths where the fishing spots are, there's a lot of broken glass.

One of the best biking trails in Ohio

Back in 2004 my wife and I rode this trail. I remembered that we had trouble finding the trailhead at that time. Now, in 2020, my grandson and I went back and found a trailhead that did not even exist back then, in Washingtonville, just off Route 14 -- and Leetonia is only a couple of miles to the South, with another nice trailhead and parking area. We did the round trip to Lisbon and back. Lots of fun and lots of shade. I think maybe 80% of the trail is covered by trees. It is downhill from Washingtonville, so be ready for some uphill cycling from Lisbon back to Leetonia or Washingtonville. The 66-year-old grandpa and the 15-year-old grandson passed everyone going back up the hill! Anyway, lots of nice people and nice scenery. You can also rent a bicycle or a motorized cycle at the trailhead in Lisbon, if you decide to start there. I do wholeheartedly recommend this trail. About 25 miles round trip. One of the best biking trails in Ohio.

This was a great trail for a nice 26 mile ride. All paved and flat. If you want to see Ohio, this trail has it all - farms, river and bridges. The best part is if you want to go farther, you have more of the Ohio to Erie trail in both directions.

This was a great trail for a nice 26 mile ride. All paved and flat. If you want to see Ohio, this trail has it all - farms, river and bridges. The best part is if you want to go farther, you have more of the Ohio to Erie trail in both directions.

I have run this trail several times. It’s really nice, paved (although there are places you can run on gravelly path next to the river ¿¿). The disc golf course is also great!