Looking for the best Mountain Biking trails around Lake City? 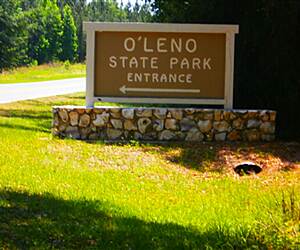 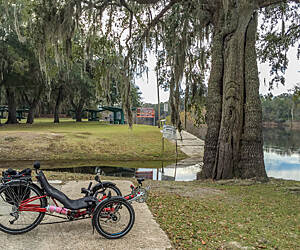 Nice Area, Trail Has So Much Potential

Rode the trail this weekend from Madison to almost the end before riding dirt and pavement into Georgia, then back to the trail and to Madison.

Area is absolutely beautiful. As mentioned, if interested in adding distance, hardpack dirt is easily accessible from the trail.

I say it has so much potential, as maintenance of trail was disappointing. Nicely paved areas had a good deal of debris from trees, some not visible until you were literally over top of it.

Other areas further north on the trail are plagued by serious roots tearing up the pavement.

I have ridden many trails in Florida, and this was probably the least / worst maintained of all, yet I still enjoyed the ride and the area.

Also, as a note if you're there on Sunday, come prepared. Many things in the area are closed on Sunday. The market in Pinetta BBQ was closed that day and no pizza inside either. Snacks were lunch.

Would love to see it given some love and go back to ride again.

so peaceful and perfectly shaded

Trees have fallen across the trail and were not revoved by maintenance crews. Private individuals had to remove them. Dogs at the Davis trailer park are an ongoing nuisance thst have troubled numerous cyclists I've met.

Would anyone recommend this trail for longboarding?

We rode this trail in January of 2021. Well maintained and pleasant to ride. We highly recommend this trial.

We rented ebikes to try them before we get ours and this trail was so much fun. The hills and it’s shaded made it enjoyable. Highly recommend.

We were Rving at the State Park and completed a 34-mile ride using the 6-mile connector to get to the trail in Keystone Heights. If I were to do it again I would have parked in Keystone Heights as the 6-mile connector is adjacent to SR-100 and very uneventful. The area south of Putnam Hall was really pretty, but like many of these trails you do see the road, houses etc. Great surface for riding. We did see plenty of Gopher Tortoises out of their burrows, Fox Squirrels, and even saw a large brown snake going into a GT burrow.

Went down last week and rode with my daughter. It being a train route the trail is arrow-straight and pancake-flat. Saw folks rocking aero bikes and kids with training wheels. Lots of services available along the route. Well done!!

Don’t let the short mileage fool you. This little nugget moves you through some great breweries, right next to one of Gainesville’s bike shops, you cruise by a grocery store all while connecting you to a series of longer trails. And it does so very Safely through downtown Gainesville. I appreciate this trail immensely.